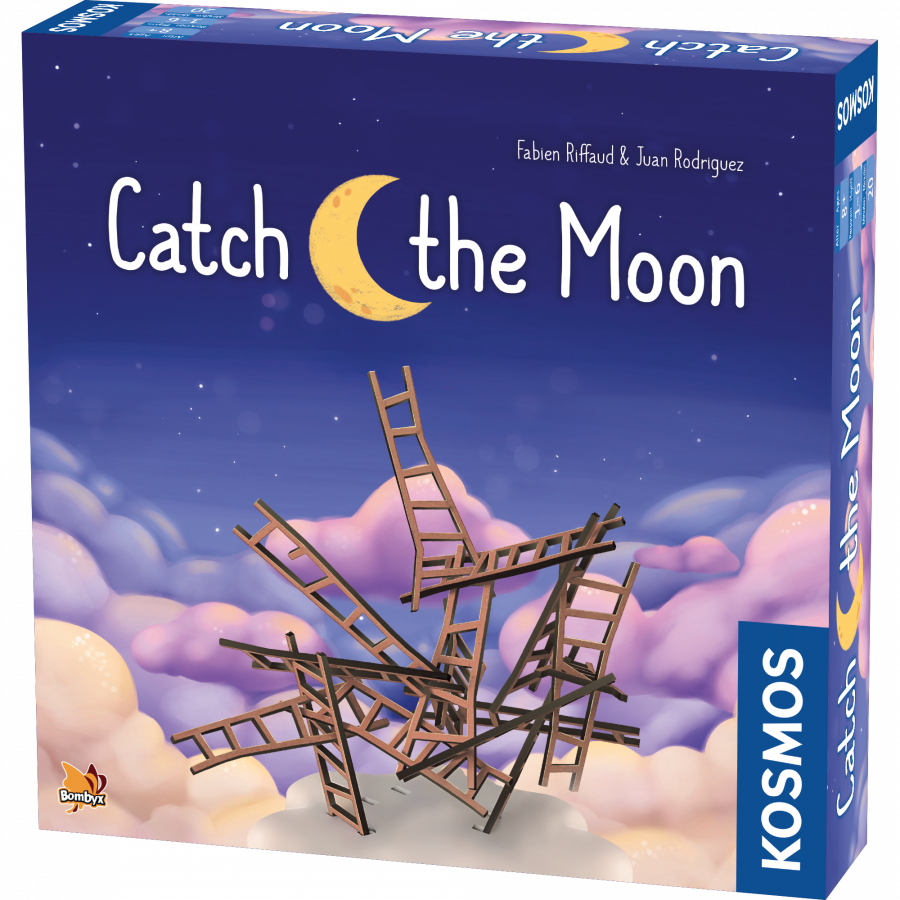 Catch the Moon is a stacking/balancing game in which players build a structure of ladders to reach the moon! Each turn, players add ladders to the tower, while trying to keep it from collapsing. How is the play experience? Does it play like a dream, or is it a total snooze? Let’s shoot for the moon and find out!

Catch the Moon is about as rules-light as games get. The goal of this game is to collect the fewest raindrop tokens—basically, the fewest negative points.

To set up, players place the plastic cloud base on the table and insert 2 starting ladders into it in any configuration.

The rest of the ladders are placed into the box insert to form a supply. All these other ladders are angled unusually. On a player’s turn, they begin by rolling the die. Based on the result, they then have to place a ladder such that it satisfies 1 of 3 conditions:

As one would expect, newly placed ladders cannot touch the cloud or the table. If anything falls, the current player receives 1 raindrop token and all fallen ladders are removed. The game continues until either all ladders have been placed or until the last raindrop token is given out. When either of these situations happen, the game ends and the player with the fewest raindrops wins.

Catch the Moon also includes cooperative and solitaire modes. In both cases, the game remains largely the same as described above, but these alternate play styles add some extra versatility.

Simply put, Catch the Moon is a beautiful game. The structure players build creates a striking, surreal visual—it looks like something you might see in a dream, a perfect metaphor for the theme of the game. It is fun to see the tower grow, and by the end, players will have a collective sense of satisfaction in admiring what they have built.

Obviously, there is very little to this game mechanically, but the stacking/dexterity element works well. The fact that the ladders are cockeyed means they connect in interesting ways and ask players to think carefully about how best to position them. The rulebook includes a series of diagrams showing different methods of connecting ladders, which may be helpful for younger folks.

The overall play experience is fun. Games like this always have growing tension as the tower gets taller and more precarious. This game is no exception. Players can mess with their opponents by intentionally placing ladders poorly so that they are more likely to fall on someone else’s turn. Also, unlike many stacking games such as Jenga or Rhino Hero, it is uncommon for the entire structure to collapse in Catch the Moon. Because of how the ladders get woven together, the tower tends to be pretty sturdy, so when something falls, it’s usually just a couple of pieces.

The production quality of Catch the Moon is high. The cloud base is solid plastic, the box insert has a pleasing flocked texture, and the wooden ladders seem durable. If handled too roughly, the ladders would certainly break, but as long as everyone is gentle with them and treats the game appropriately, it should hold up for many plays.

Honestly, Catch the Moon is one of those games in which I don’t really care who wins or loses. It’s all about the aesthetic and the experience. The game is simple enough that just about anyone can understand it—my 3-year-old picked it up easily—and it’s lovely to look at. Don’t expect to find much mechanical or strategic depth in this box, but if a breezy dexterity game with a dreamlike quality sounds interesting to you, check this one out.

Catch the Moon is a beautiful, surreal game with a fun stacking element. Breezy to play, lovely to look it, and recommended for families and fans of dexterity games.