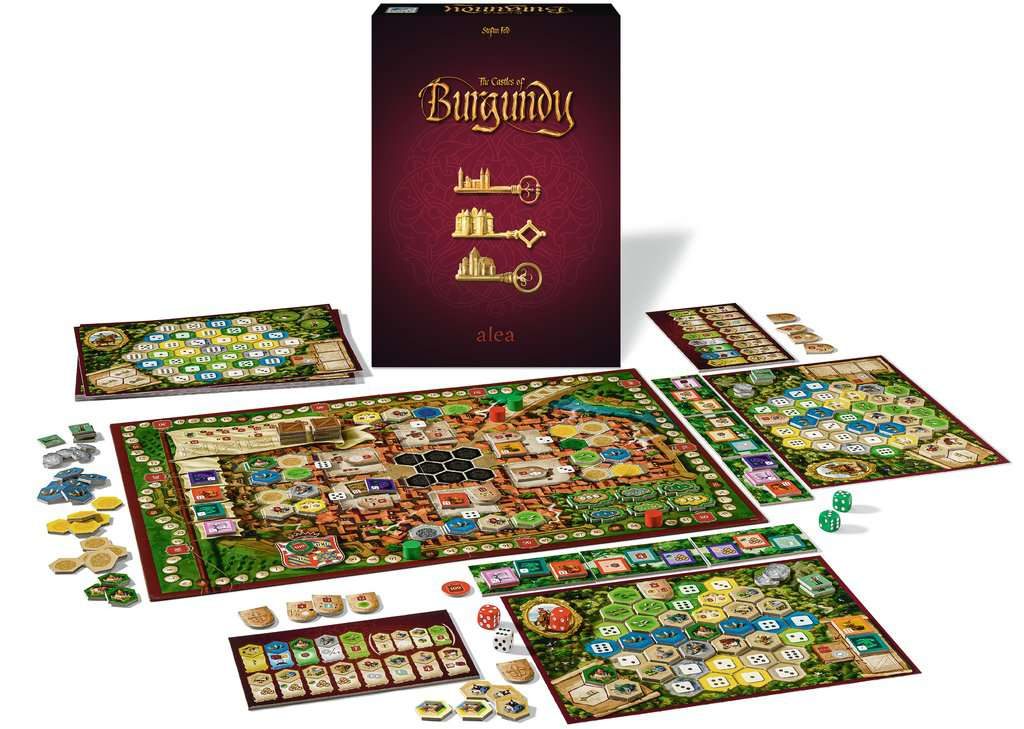 When I first jumped into the board gaming hobby, I discovered quite a few “stereotypes” among board game geeks. For example, alea, an imprint of Ravensburger, had a reputation of publishing fantastic strategy games, but with boring themes and bland presentation. Despite that, games like Castles of Burgundy rose within the highest ranks of BoardGameGeek’s best games of all time, cracking the Top 10 at one point. Now, ten years later, alea is seeking to break out its reputation, offering a completely reworked edition of Castles of Burgundy with new art and all expansions included. Let’s take a look!

Let me spoil the ending: even its prior packaging, Castles of Burgundy is one of the best board games ever made. I’ve thought long and hard about what makes it so special, especially since it’s not in my usual wheelhouse of card-driven games. And I think I’ve finally found the key reason.

It seems to me that many strategy games are designed using two connected pieces. A designer comes up with a mechanism to play, whether it be deckbuilding, worker placement, card drafting, or something else. And then, there’s the question: this is a great mechanism, but what do you with it? What I don’t like is when games have an interesting mechanism but what it does is simply “things the designer said it has to do,” because they could not find a cohesive way to bring it all together. In fact, Stefan Feld himself has fallen into this trap before. But not with Castles of Burgundy.

Castles of Burgundy is so clever, so smooth, so tightly wound that it’s hard to see where one mechanism ends and the other begins. Yes, the central mechanism is using your dice to do things, but the key is that how everything is done so naturally using those six numbers, whether it be grabbing tiles, placing them, or selling goods. And those basic ideas of grabbing tiles and placing them are so natural and intuitive, that it makes scoring far less obtuse, since the main goal is clear: fill up your board! The special effects for tiles are also natural and intuitive, because those core mechanisms are so good. They also are just interactive enough to demand your attention to what opponents are planning, resulting in a game that is firing on all cylinders for its entire duration. It’s a truly fantastic game, and probably Feld’s masterpiece.

Castles of Burgundy has always been a pure joy to play; what’s been less fun is trying to get it to the table. The colors are quite faded and muted on the original edition, and the choice of colors wasn’t much better (dark green, light green, and yellow? BEIGE?). In fact, my wife and I often called it either “the beige game” because the game’s color palette was often its most memorable feature. The tiles were also disappointingly thin, but we made it work.

I’m happy to say that this new edition is an absolute dream. The game is gorgeous; gone are the muted colors and thin tiles. Even the beige tiles look great! There are also player aids included as well, and every single expansion ever released for the game (most small, some big). But the artwork is everything here: the one thing holding this game back is now a thousand times better. The only downside to the new art is learning the new icons, which doesn’t take very long. Others have told me the central board looks too busy; I can see their point but it doesn’t bother me. I’m overjoyed with how this game looks.

If you don’t own Castles of Burgundy, picking up the new edition is a no-brainer: do it. The real question is whether you should pay for the upgrade if you already have the game. Well, it’s a tougher decision than it should be. I wish this edition had been truly deluxe, with an actual built-in storage solution (fortunately, I still had my bags from the BoardGameGeek store), and a sturdier box. And the expansions are nice, and we’ll use some small ones like extra tiles and new boards, but they’re not a must-have, unless you enjoy solo games (and that expansion is quite good!). Again, though, artwork is everything. If you can unload your current copy of the old edition for a reasonable price (or donate it to a local library, like I did!), then I think the new edition looks so nice that it’s worth the (higher) price of the anniversary edition.

Castles of Burgundy is now a game that belongs in just about every gamer’s collection, if it wasn’t already before. The team at alea hit it out of the park here, but they may have caused a bit of trouble for themselves. Now that I know they can do it, I want every release of theirs to look this good!

Thank you to Ravensburger US for providing a review copy of The Castles of Burgundy.