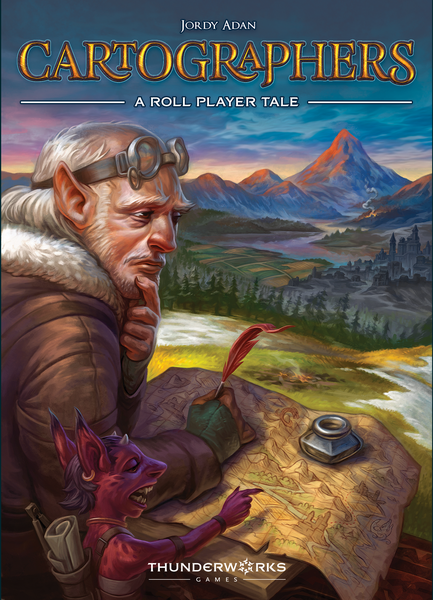 Cartographers is a Flip ‘n Write game that sees each player as one of the Queen’s Royal Cartographers, sent out to survey the Northern lands prior to their reclamation. The game takes place over the four seasons, after which the player with the most stars wins. Grab a pencil and see if you have what it takes!

Players will usually flip over 3-4 Ambush cards mixed in with the main deck, which are Goblin Attack, Bugbear Assault, Gnoll Raid, and Kobold Onslaught. Each card has 2-3 monsters all with weapons out and teeth bared. Other than the Gnolls lighting someone’s hut on fire, no violence is actually shown. The box cover art and rule book also feature a small demon-like entity, who seems to be helping the possibly elven cartographer.

Cartographers is played like a Roll & Write game, but instead of rolling players will be flipping over cards in the explore deck, which has 13 different cards in it. 1 Ambush card is also mixed in, but more on that later. Players will fit the different shapes on the Explore cards onto their maps, filling them in with Forests, Villages, Farms, Water, and occasionally Monsters. Around the map there are also Mountains, which can gain players a coin if they are surrounded orthogonally (diagonal doesn’t count).

Each explore card has a value of 0-2 in the top left corner, and once all the revealed Explore cards equal or surpass the season’s value, that season ends and scores are totaled for that round. The only other wrinkle are Temple Ruins cards, which dictate where your next placed shape will go. If a Ruin card comes up in the Explore deck, it means the next Explore Card shown has to have a Ruin in it when you put it down on the map. Originally it felt like this would be constrictive, but there are six of them on each side of the map, so it isn’t so bad.

The maps players use have an A and B side, with the main difference being that the B side has a large chasm in the middle. Players can not place anything in these spaces, or the mountain spaces. Each map also has space at the top for players to put their name, title, and draw a family crest. While I’m not particularly gifted in drawing, I liked that it was made an option and had fun filling in my shield with various shapes.

Each season has a different scoring method. There are 4 different ways to make points each game but you will only be using 2 of them each season. For example, in Summer players use scoring cards B and C, but in Winter they use D and A. It cycles through so each scoring card is used twice; players hoping to maximize their scores need to play to the specific season they’re currently in. Also, each scoring card has 4 different cards for that letter, so replayability is high.

When players do finally encounter an Ambush card, they pass their maps according to the arrows on the Ambush card, and each player gets to fill in the Ambush card’s shape on the map they just received, wherever they want. Monster tiles that have blank spots next to them are worth -1 point each at the end of the round. When playing solo, players will fit the monster shape as close to the corner of their map as possible, as indicated by the top right of the Ambush card. Just briefly speaking of solo mode: I liked that it didn’t have a different setup than usual, but I was disappointed to find that it was very easy. In future games by myself I might put the Ambush card 2-3 cards down to ensure that I run into trouble each round. Somehow in a deck of 14-16 cards it’s possible to only have 2 or 3 ambushes in a game.

Overall, Cartographers plays a bit like Silver & Gold, but with more going on, and more replay value. I really like the different seasons, and how they change your strategy completely from round to round. Also, almost any combination of four scoring cards would work, as they don’t usually have competing goals – I can only think of a couple cards that are an exception. If you like Pencil and Paper games, or have a fondness for cartography in general, I would strongly suggest you check out Cartographers.