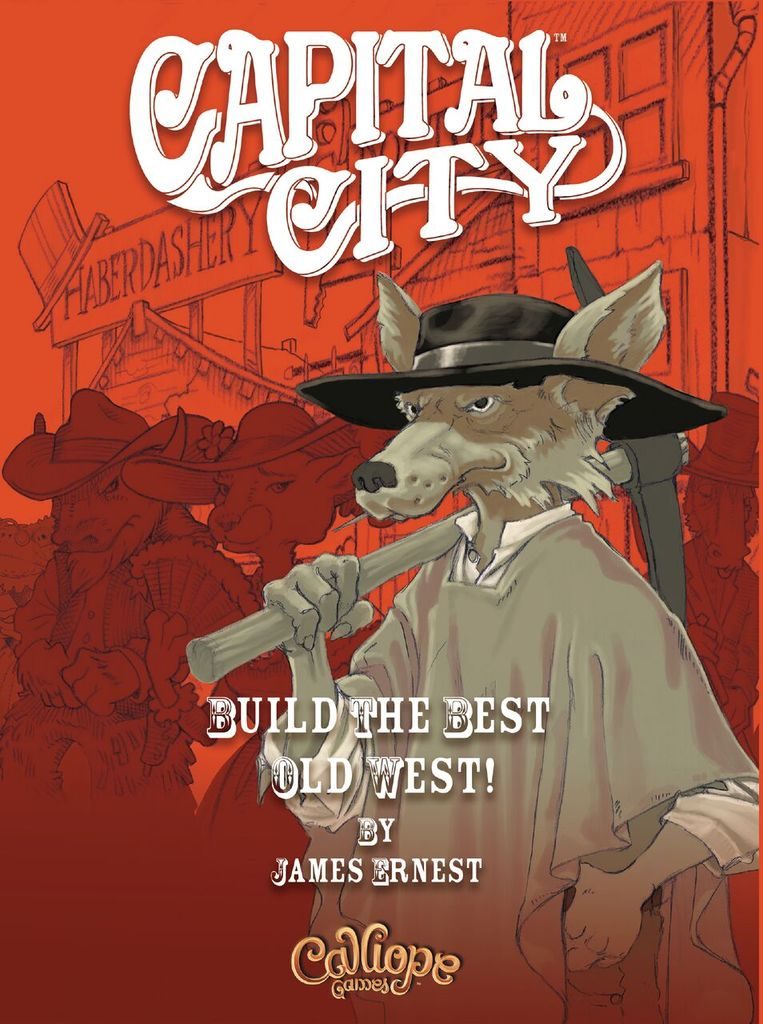 “Build the best Old West,” touts the box of Capital City, a new entry in Calliope Games’ “Titans” line. In this quick-playing card game, players have just established a settlement in the untamed west, and aim to turn their small town into a booming city.

In each of the four seasons (rounds) of this game, a new crop of travelers comes into town, looking for work. As the city’s population grows, players are tasked with opening new businesses and providing them with jobs.

Capital City comes with several types of cards, but the two primary types represent businesses, which list a purchase cost and a reward payout, and job-seeking characters, which come in six colors. Both of these card types bear half of a symbol (either a heart, sheriff’s badge, or gear), and must be connected to a card with the other half of the icon. For example:

At the start of each season, players set up the round by randomly dealing a number of character cards face-down to form the “Train,” that season’s batch of of newcomers. Because the backs of the characters are color-coded, players will know which colors will be represented on the Train, but not which symbols they will possess.

In the middle of the table, players will also reveal a number of buildings, which they’ll be able to purchase later in the round.

Once the round setup is complete, players determine the turn sequence by bidding for position. In general, going earlier in the round is better, but the turn order is auctioned off from last to first. Capital City uses a “no thanks-style” bidding system, in which bids are placed in a central pot, and players must either ante up, or pass and take that card and all the money in the ante.

When the turn order has been decided, players may each select one character card from the Train, passing the remaining cards to the next player. The Train always contains one card more than the number of players, so the last player will have two options to choose from. They will select one of these cards and discard the other.

After new recruits are picked from the Train, players may each purchase one building from those available. To do this, they simply pay the purchase cost to the bank and place the building in their tableau. If a player cannot or chooses not to buy a building, they instead receive five money from the bank.

Then, going in reverse player order, players may activate character cards by attaching them to matching buildings. When all character slots on a building are full, the building scores. Herein lies the heart of the game.

When a character activates, other characters of the same color can also activate. In the example below, a player is attaching a white card to one of her buildings, completing it. First, she receives the building’s reward of four money, then she checks if she has other white characters in completed buildings. She has one, so this character activates as well, scoring its building for four more money. Each opponent may then activate one of their own white characters, potentially scoring as well. This means buildings pay out when they are first completed, but they can pay out again and again thereafter!

The game ends after the fourth season is completed. Players cash in leftover money, earning one point per ten dollars. At this time, the player with the most points wins.

James Ernest’s games have never resonated with me. I did not care for Kill Doctor Lucky or Lords of Vegas, two of his most popular games, so I went into Capital City without any expectations. I was pleasantly surprised to find that I actually enjoyed this game. Despite its simplicity, it offers some interesting decisions.

For example, if a player really wants to go first in the turn order, she might have to burn a lot of her money bidding to do so. Going first means she will get to purchase a business before anyone else, but by that time, will she have the money left to actually afford it?

Moreover, when it comes to selecting characters from the Train, should a player try to get a bunch of one color, or should she diversify? If she opts for a single color, her turns might have huge payouts, because her characters will continually activate one another. However, she may not get much on opponents’ turns, since they likely won’t have the color she’s collecting. On the flip side, if she goes for a variety of colors, she may benefit more on opponents’ turns, but her opponents may also benefit on her’s.

I’ve often heard reviewers (myself included) say that they felt a certain game drags on too long—that they wish it played in a shorter time frame. Capital City is one of the rare instances of the opposite issue; I actually wish this game lasted one or two more rounds. For the first couple of seasons, players are building their tableau, getting things moving. By the winter season, they have developed a nice engine, but then the game ends somewhat abruptly, before they can really start milking the points. Some folks might not mind this, but I wish there was a variant for extra rounds. (I suppose this is a good complaint to have; it means I want to play the game more!)

All in all, though, I enjoyed Capital City. Visually, the game looks nice, with great art and presentation. As a minor quibble, I wish the point tokens were a bit larger, but that is hardly a game-breaking issue. The rules are clear and concise, and the game is pretty easy to play and understand. I recommend giving this one a try!