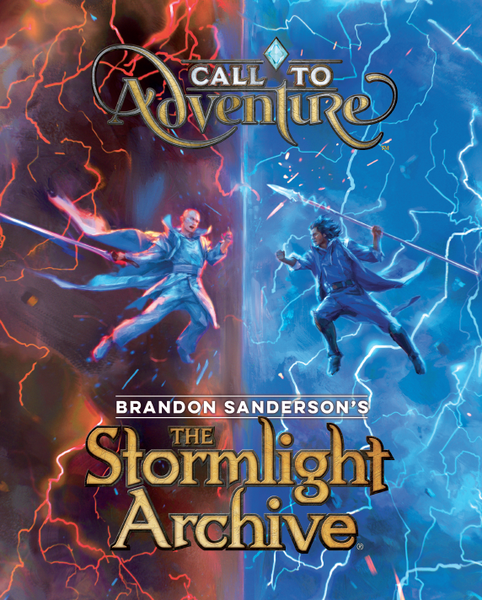 In Call to Adventure: The Stormlight Archive players are tasked with forging unique destinies and facing challenges to sharpen their abilities and come out on the other side with a life lived and a character built. The Stormlight Archive is also set in author Brandon Sanderson’s fantasy world where the world is torn apart by war and deadly storms, and only the Knights Radiant can hope to face off against the evil Odium. Do you have what it takes to survive in Roshar? Cast the runes and find out!

Some of the new cards feature dead or dying characters, or people who were just stabbed or struck. A few cards have blood, but no gore.

Many cards depict magic users, both good and evil. Some cards have foreign creatures or monsters. A few have images that could be scary for kids.

One card has a woman floating on her back in a large pool or bath. Her hair covers her chest, and her lower half isn’t visible.

A couple of cards mention slavery; one is even a possible trait players can choose to gain. There is a wide socioeconomic spectrum on display in the game.

The Stormlight Archive can be both a standalone sequel, or an expansion to the original Call to Adventure. The rules even suggest what cards from the base game would best integrate with Stormlight. Full disclosure: I had not ever heard of Brandon Sanderson or his work prior to this review. While this let me observe the game from a neutral point of view, I couldn’t help feeling that I’d be far more excited about seeing certain names and events come up if I were more familiar with the source material. That being said, it did make me consider picking it up the next time I’m looking for a new book.

For those of you who know nothing of the world of Roshar and its deadly Highstorms, Mr. Sanderson and Brotherwise Games were kind enough to include a one-page front-and-back sheet that gives players some background on the world, the main villain Odium, and the would-be saviors The Knights Radiant. I appreciated this inclusion and it gave me and other players at the table the chance for more buy-in on the game. The basic premise is that Odium is one of three godlike entities in Roshar, and he wants to take over and dominate the land. The Knights Radiant, once a powerful group of warriors that protected the land, must now band together again to stop Odium before it’s too late. I suspect folks who have read the books will find greater enjoyment of the theme; but for folks who haven’t haven’t, playing the game just might make them want to check them out.

Overall the game play is similar to the original Call to Adventure, so I’m going to focus on the main differences. One of the biggest is the Solo/Co-op mode in The Stormlight Archive. In this iteration of Call to Adventure, players will face off against Odium instead of a random Adversary. His

rules of engagement will be different based on which of the Adversary Quest cards is drawn. One of them even gives players a chance to turn on the group and pledge allegiance to Odium! I actually rather liked the new Co-op mode; even though it was hard, I wanted to play it again. Odium starts at 9 difficulty (most Act 3 cards are 6-8) and has different rules each time for gaining and losing experience. The more experience tokens Odium has at the end of the game the harder he is to beat – players can discard tokens for each success they have over his 9. So if someone tossed their two best sets of runes and got 11, they could remove 2. Oh, and if anyone misfires and doesn’t beat Odium, the whole group loses.

“Cardboard experience tokens” = Ok, sure I get it. “Playing-card thin Player boards” = WHAT. IS. THIS.

Speaking of experience tokens – they are no longer 3D plastic pieces. Instead, they are now just cardboard punch-out chits. I can understand from a big-picture point of view that this is easier and more cost-effective. What I don’t understand or like at all is that the player boards are now the same thickness and durability as the cards being placed on them. The original game’s player boards were sturdy, thick cardboard. I don’t like this change at all, and it really makes the sequel feel cheaper.

So in the end, if you crave more Call to Adventure or you’re a big fan of Brandon Sanderson’s The Stormlight Archive, you should probably check out this game. It’s got almost everything the original had going for it (minus the quality components) and an even better Solo/Co-op mode. So take up your Shardblade, fight back the Fused, and get ready to face Odium in Call to Adventure: The Stormlight Archive.