Choose Your Own Adventure plus the phone book 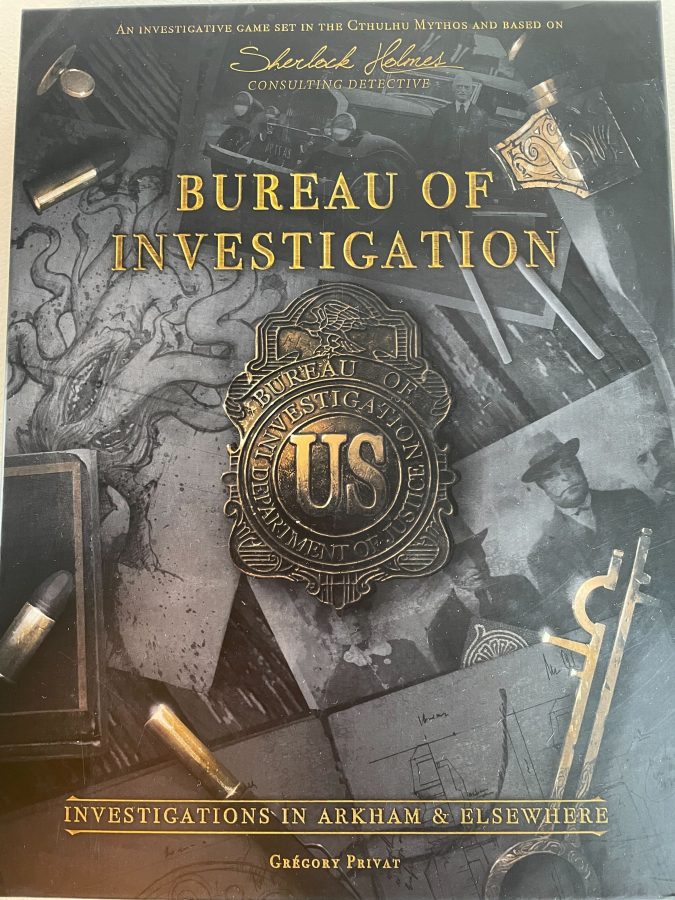 In Bureau of Investigation: Investigations in Arkham & Elsewhere (based on the Sherlock Holmes Consulting Detective system), players take on Lovecraft-inspired criminal cases that have eluded the local authorities, who have called upon the BOI (predecessor to the FBI) to help solve them. Players will interview and investigate leads, take notes, pour over maps and newspapers, and often even look up names in the directory (kids, ask your parents what a phone book is). The result is a highly thematic “theater of the mind” investigative experience. But is it fun, or does it leave players wanting less instead of more? Read on for the review!

Occasionally players may investigate and find crimes including assault and murder; descriptions are brief but you know exactly how they died. Depending on choices, players may even encounter some otherworldly evils or occult magics.

When I say that Bureau of Investigation is like a Choose Your Own Adventure book crossed with a phone book, it doesn’t sound like a compliment. But it is. Once you’ve read the short 5-page rulebook, players are given the case file which includes all of the interviews and investigations one could possibly make in that case, along with the map, directory, and any other additional components like a newspaper or extra file. Then you’re free to begin and carry out your investigation however you see fit, the only constraint being the number of leads you’re allowed to run down, which can sometimes be added to when significant progress is made on a case.

So instead of moving around a tiled board and choosing two actions each round like in many Lovecraft-inspired games, players will take turns being lead investigator and deciding who to talk to or spy on next. Note-taking is a MUST in this game. At the minimum you’ll need to keep track of who you talked to so you know where you’ve been and how many leads you have left. But being able to reference back to who you’ve talked to and what you’ve learned is a big help. In this way the game does a great job of making it feel like CSI: Arkham (I would watch that) as you’re going from lead to lead tracking down what really happened.

The end of the game comes when players have either exhausted their leads or feel like they know the final locales where the endgame will occur. Players choose 3, and based on their choices they get a score (usually 0-4 per choice). 7 is a resounding success, 4 to 6 is a success, and a 0 to 3 is a failure. Also, the game encourages players to retry cases in order to try for a higher score.

Whether or not this game is a hit for you and your table will depend a lot on if you enjoy “theater of the mind” and thematic games. There are no hit points to track, no monsters to slay at each location, and no gear to obtain. I was very surprised when I opened the box and found nothing but the five case files, rules, and supplementary papers. There are no minis, cards, or play maps save for the reversible map of Arkham and Boston, which is more of a real, functional map to show players the different locales and what districts they reside in. I derived a lot of enjoyment from BOI, but just because someone “loves” Mansions of Madness doesn’t mean this game will be their jam. You’re going to want a partner or teammates who are happy to look up names in the directory, or take notes, or scour the newspaper, and not get bored or whip out their phone when they aren’t the lead investigator.

Highly thematic and demanding of your attention, BOI can be a lot of fun if "theater of the mind" works for you.