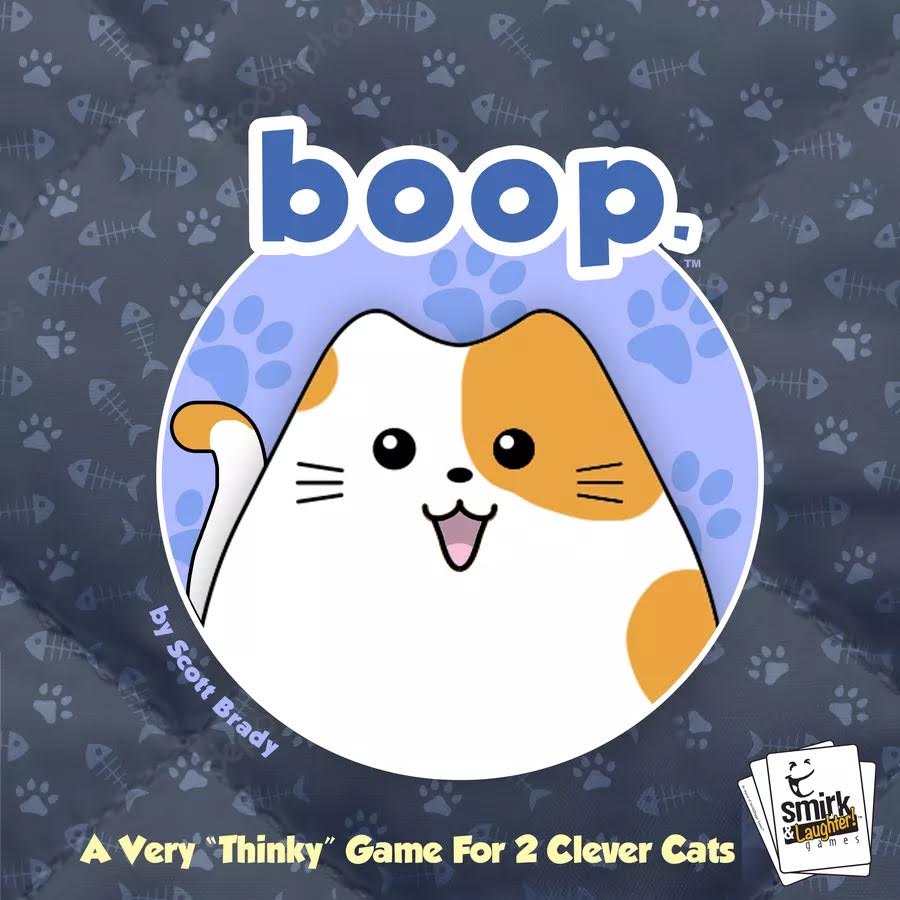 boop. is an adorable abstract game of cats nudging each other around atop a comfy bed. In the style of Smirk & Laughter’s excellent Shōbu, this game is light on rules but offers deeper-than-expected strategy. Meow!

boop. advertises itself as “deceptively cute, deceivingly challenging,” a fitting tagline for a tactical game about cats relaxing on a comforter. In this game, two players take turns placing feline meeples onto a grid of squares. The goal is to be the first player to line up three cats in a row.

The bottom of the game box serves as a “bed frame.” It is placed upside down, and a quilted fabric board is placed on top. Each player begins with eight kitten meeples in their color, as well as eight cat meeples in their reserve.

On a player’s turn, they place a kitten or cat onto an empty space on the bed; at the start, only kittens will be available. Whenever a piece is placed, it “boops,” (i.e. pushes) pieces that are adjacent, both orthogonally and diagonally, into the next space. If there is already a piece in that next space, no boop happens in that direction. If a piece is pushed off the bed, it is returned to its owner’s supply. (As a side note, kittens cannot boop cats.)

If a player lines up three of their pieces, either orthogonally or diagonally, those pieces are removed from the board. Any kittens in the line are discarded and exchanged for cats. These cats, along with any that were in the line, are returned to their owner’s supply. The first player to line up three of their cats wins! Alternatively, a player can win by having all eight of their cats on the bed.

Despite what its cutesy facade might lead you to believe, boop. is actually a thinky game with no luck. In the vein of Shōbu, it is a modern design that has a classic abstract feel. The decision of where to place a piece each turn is simple, but it comes with multiple considerations. Because of its turn-by-turn nature, there is a lot of room for clever plays.

Two pieces next to each other are more defensible than one, so players want to get their cats adjacent. Once they do, they can place a piece such that it completes a line. Another tactic is to leave an empty space between two cats and try to boop the third one into the open spot. Pieces will often get pushed off the bed—this is a good way to remove opposing felines, but sometimes a player will need to sacrifice one of their own pieces in order to execute a bigger move. The nuances aren’t brain-burning per se, but they are richer than I was expecting.

The production of boop. is nice; I can only think of a handful of other games that involve fabric components. The quilt is the centerpiece, and it’s far superior to what could have been a simple cardboard tile. I was initially worried that the animals might tip over on the puffy surface, but the meeples are thick enough that this has not been an issue.

I’ve never cared much for “cute animal” themes in games, so I would have preferred this to be a themeless, “black stones vs. white stones” game like Go or Shōbu, but that’s just my personal taste. (It seems the original, self-published version of the game actually was like this.) If I’m being honest, though, the cat theme probably has broader appeal. And again, the quilt is admittedly great.

Bottom line, boop. is a pleasant surprise. Based on its theme, title, and cover, my expectations were low, so I was happy to find inside the box a solid tactical game. Indeed, it’s deceptively cute and deceivingly challenging.

A review copy was provided by Smirk & Laughter Games.

Though the theme doesn't do anything for me, boop. is a solid abstract game, a worthy follow-up to Shōbu.