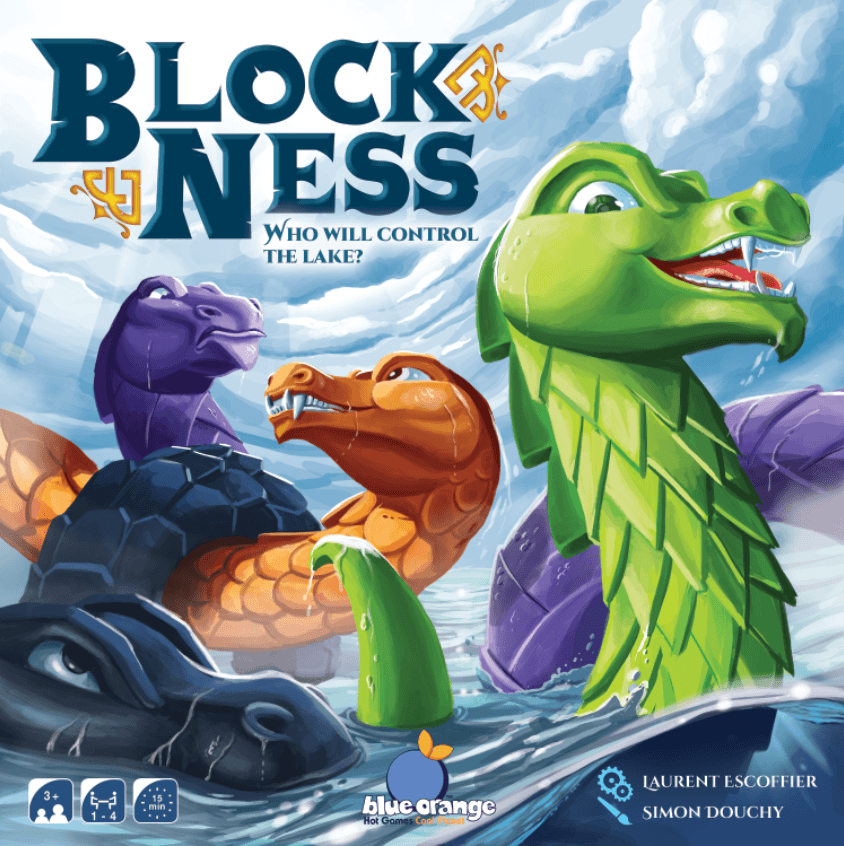 Block Ness is a new release from Blue Orange Games, maker of popular family and kids games such as Kingdomino, Photosynthesis, and Dr. Eureka. In this game, players build sea creatures in hopes of crafting the longest one. Like all Blue Orange titles, Block Ness is fun, highly accessible, and has great component quality.

The Loch Ness Monster may be a myth, but the BLOCK Ness Monster has been spotted at a game store near you! In Block Ness, players build the titular monsters by adding 3-dimensional body pieces to extend their length. The game is played on a board that sits inside the box base, resting on the insert underneath. The board features a grid of holes and 3 sectors in different shades of blue.

To set up the game, each player places their monster’s starting segment in the innermost (dark blue) sector, with its head at one end and its tail at the other.

Note that the starting segments are not the same length for each player, but all starting pieces are the same height.

Then, players take turns extending their monsters. Each newly-placed body segment must be adjacent to either the monster’s head or tail, and whichever end it is placed next to, the head/tail is moved to the newly-placed segment to extend the monster. Segments may be placed over other segments (regardless of color), but may never be placed under them, nor may they be placed over an opposing monster’s head or tail.

This means that after a few turns, the board will look something like this:

Play continues until either all players have placed all their monster segments or until no one can make a legal move. When either situation occurs, the game ends, and the player with the least remaining segments wins. In case of a tie, the player whose monster has the highest head wins. (Further ties result in a shared victory.)

As usual, Blue Orange has made a game that looks amazing and plays well for a variety of ages and skill levels. Block Ness has a striking table presence, and it’s cool to see the board grow as the pieces interweave. Mechanically, it feels very abstract and tactical; it is much more about responding to opponents’ turn-by-turn moves than strategizing long-term. (Frankly, since each monster has only 10 body segments to place, there isn’t even a “long-term” in this game.)

The components are high-quality and have a strong “toy factor,” as consumers have come to expect from this publisher. The head and tail pieces fit nicely onto the body segments, tight enough that they stay in place if the table gets bumped, but loose enough that they can be relocated easily. Overall, Block Ness is a well-produced game that is a delight to look at.

Blue Orange’s modus operandi is games that are aimed at a younger audience but have enough decision space for adults to enjoy as well. This game really fits that bill. Unlike, say, Photosynthesis, Block Ness may not a good choice for an all-adult group, but in a mixed-age family game night setting, a good time should be had by all.

Once again, Blue Orange has made a game that looks great and works well with players of different ages and skill levels.