Review – Beyond the Sun 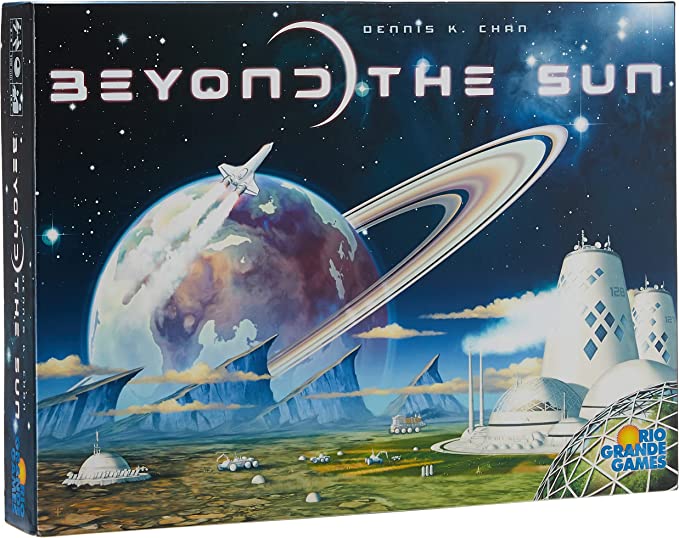 To begin, each player will choose a faction mat and follow the setup steps listed. Beyond the Sun is a worker-placement and resource-management game, so players will place their mover on actions in order to spend or gain resources. The game ends when 3 or 4 (depending on the number of players) achievements have been completed, but there’s many other ways to score points besides going for those achievements.

Player turns follow a fairly basic structure: move your action selector (worker placement), gain resources or trade, then check for achievements. At the beginning, you’ll only have a few actions to choose from, but as you research new technologies, you’ll have more options. When you gain resources, you can choose either ore or population, but if you decide to trade, you’ll end up paying for those same resources.

While it initially seems like a lot to manage with the population, ships, and ore, it’s helpful that each resource is almost exclusively used for gaining a certain type of thing. So if you’re more interested in taking planets over, you’ll need ships and ore. If you’re interested in researching technologies, you’ll need population and the occasional ore. You can manage how many of each of these resources you get through your production board, so you can go for a balanced approach or start mining ore like crazy.

Researching technologies and creating the technology tree is the main attraction. It’s exciting to reveal the new technology cards, choose the type you want, and watch it change the game as other players research it and use the action for their own benefit. The tree works well, and while you’ll see some of the same technologies over and over, that’s good because players will have a general idea of what’s available and what to plan for after 1 play.

Beyond the Sun offers players a complete space fairing experience without being a true 4x game like Scythe or Eclipse: Second Dawn for the Galaxy. Because there’s so many ways to earn points, you won’t have many “bad” turns. If you’d like to go full Empire and conquer as many other systems as you can, go for it. If you’re more into technology, that’s fine too. Meaningful (and valid) choices abound. Moreover, the achievements you’re working towards will change each game, so the replayability is there.

The components are an interesting mix. The cards are bland, but they have intriguing names. The player boards are also bland, but they have divots that fit the discs and excellently designed, colorful dice. The game board is boring, but the systems board does a decent job of at least hinting at the galaxy players are exploring. The coal is fun though. It feels like plastic coal.

Beyond the Sun does not look like a fun game. You will look at its bland, minimalistic board and say, “I do not want to play that game.” If you manage to get past the looks, you’ll say, “Wow, this is actually fun.” And it is! It can be a lot to take in at first, but once you get going, everything flows in a logical cause-and-effect nature (quite appropriate given the tech tree).

The learning curve isn’t as high as it may first seem. The rulebook is well written, and the player aid cards are incredibly helpful both for turn-taking and score-keeping (I like answering the question, “So how do I score points?” with, “Flip your player aid card over”). What’s great too is the beginning of the game doesn’t afford many actions beyond the basic stuff. Once players get the hang of things and start researching new technologies, it won’t seem as overwhelming to have so many options. In short, someone could potentially win on their first game of Beyond the Sun, which is not the case with games like Scythe and Root.

If you’re looking for a well-executed space-fairing game with an interesting tech tree that will be different every time, look no further than Beyond the Sun. Though it may take a few rounds to piece everything together, once you understand how everything works together, it becomes a wonderful puzzle of cause-and-effect and tech-tree exploration.

Beyond the Sun is a well-executed space-faring game that will be more accessible to newer players than your standard 4x games.