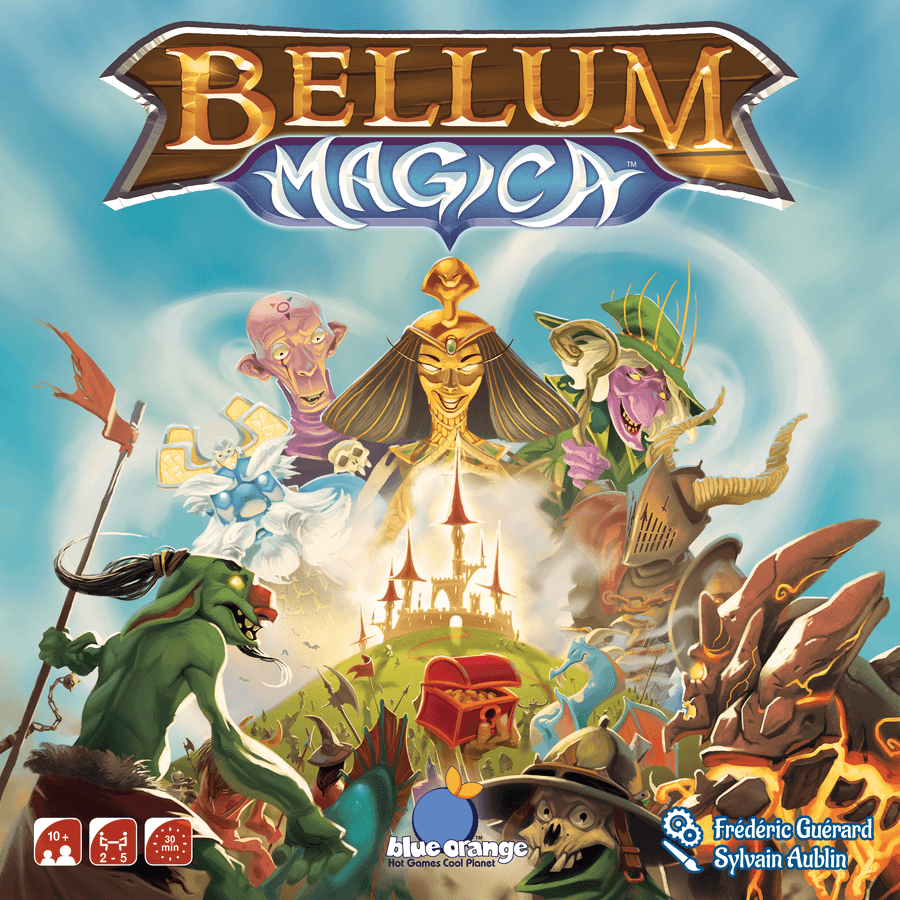 Bellum Magica is a light game of resource gathering, treasure hunting, and fighting. Players represent the leaders of fantasy hordes, attacking the local human village—and each other—in hopes of collecting the most loot. Let’s see how it plays!

In Bellum Magica, players are troublemaking overlords with gangs of mischievous creatures at their disposal. Throughout the game, they put their minions to work gathering resources and fighting.

The goal of the game is to collect the most valuable treasures. Each round, the first player rolls the die, which triggers the effects in the corresponding row on each player’s tableau (e.g. on a roll of 2, the icons in each player’s “2” row activate). However, if a player doesn’t like the rolled result, they can spend a barrel token to force a re-roll. This can happen multiple times in a round. The first player can instead exhaust a confusion spell token to reroll. The advantage in doing this is that the spell token is refreshed at the end of the round, and therefore does not get spent like a barrel.

When the die roll is finalized (i.e. when no one wants to spend anymore barrels/confusion tokens to reroll), all players collect the resources from the appropriate row of their tableau. Among the production icons are treasure maps—the player with the most treasure maps earns a metal chest, the mid-range treasure. (In case of a tie, all tied players earn a wooden chest, the lesser treasure.)

Then, in turn order, each player can carry out an attack. Their options are to attack a location in the neutral human town or to attack another player. Whichever option they choose, they must have at least as many sword icons as the location has shields. Certain locations have “magic shield” icons as well, for which a magic sword must be used. Neutral locations grant specific rewards when attacked, and when targeting another player, the attacker may steal treasure chests for each thief icon they have in their own tableau.

Lastly, each player can spend resources to recruit new creatures to their tableau. As long as they have sufficient resources to pay for them, there is no limit to the number of cards a player can recruit.

The game continues until a player has 10 or more treasure chests at the end of the attacking phase. At that time, players determine the value of their treasures and the person with the most points wins!

Bellum Magica hits Blue Orange Games’ sweet spot. It is light enough that kids can understand what’s going on and how to strategize, but it has enough hobby game sensibilities that it can keep adult gamers interested as well. In a way, it actually feels like a super-light euro game. It has, in the most basic sense, tableau building, resource management, and set collection, mixed with a bit of “take-that” gameplay. The decisions are not deep (e.g. should this card go on the left or right side of the tableau?), but they aren’t mindless either. They are just the right weight for family/mixed-age game groups. While some folks might not like that players can steal each other’s treasure, I didn’t mind it personally. I felt that it fit the theme of greedy fantasy overlords.

A big part of Bellum Magica is, of course, balance. A tableau that only produces resources or only attacks likely won’t work well, so players need to find a happy medium. Likewise, they need to balance their tableau in terms of dice probability so they can make use of any result that comes up.

The production of this game is nice, with stylized artwork and screen-printed bits. The rulebook is clear and concise, and the included token trays help to keep everything organized during gameplay. Overall Bellum Magica is another attractive offering from Blue Orange.

I like this gameand look forward to playing it with my daughter when she is a little older. If you are looking for a game that kids and adults can enjoy together, give this one a try!

Bellum Magica works well as a sort of introductory euro game. It is simple enough that kids can understand it, but has enough decision-making to keep grown-ups engaged too.