Baseball with cyborgs couldn't be better. 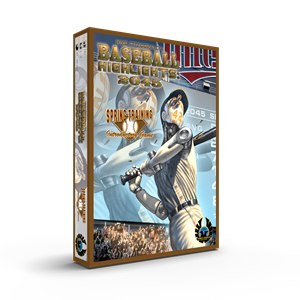 It’s 2045, and baseball is losing popularity. The solution? Bioengineering! Humans with cyborg appendages and full-on robots join the ranks of the all-human “naturals” in this excellent baseball game.

Each player will begin with a 15-card team of their choice. The action unfolds over a best-of-7 series, with deck-building drafts in between where players use currency to recruit free agents into their deck.

On players’ turns, they’ll play 1 of the 6 cards in their hand, removing opponents’ batters and runners as necessary, and placing their own batters and runners. After they’ve played their card, their opponent will get to move any of their remaining batters the specified number of spaces along the baseball diamond. Play continues until every player has played their 6 cards.

After the first mini-game is over, a draft ensues. Drafts are where players can use their generated currency (noted on each card) to draft high-value players. Often, better-performing players won’t contribute much revenue to a player’s draft, but lower-performing players will (in general, naturals generate more revenue for a team because the fans like them more). To make things easier when drafting, each class of player has a specific aspect of the game they’re generally great at: robots are hitters, cyborgs are pitchers, and naturals are fielders.

Each player on a card has different abilities. Most can get opponents’ runners or batters out, and most will threaten some batters of their own (which will turn in to runners if left unattended). Some special cards have specific conditions that, if met, trigger a special ability. An example is a leadoff hitter who, if he’s the first batter in the lineup, will produce an immediate runner. Another example is a hitter against a cyborg pitcher getting specific bonuses. Each player also generates a different type of runner (slow, average, and fast), which should be handled carefully so the diamond doesn’t get clogged up.

Much like Football Highlights 2052, the back-and-forth nature of the cards (once understood) is fast-paced and does a great job of representing the highlights of a baseball game (homeruns, strikeouts, scores, etc.). Players will face plenty of tantalizing decisions: Draft for a no-fly-zone defense or an out-of-the-park offense? Cancel your opponent’s threatening batters or get their runners out? Draft superstar players that will help you win the next game or income-earning players who will allow you to draft better players in the future?

The solo mode is excellent, just like Football Highlights 2052. It’s tough, and you’ll often end up being down 0-2 in the series before you start having a chance at winning, but who doesn’t love a good comeback? Someone even created a solo season mode for those looking for a full campaign(note that you’ll need to purchase 2 additional teams as expansions in order to play this, as Spring Training only includes 2 teams).

The components are fine, with the fiddly cardboard runner and scorekeeper tokens being the main culprit for a “fine” rating, but at this price point, that’s expected. You can upgrade the fiddly cardboard runner and scorekeeper tokens, but everything else is great: artwork, cards, and player boards. The updated rulebooks are fantastic and feature multiple explanations of turns (not that this is a super complicated game).

My main critique of Baseball Highlights 2045: Spring Training is nullified by its low price point, but it’s worth mentioning. After a few games, I started to wish there was a bit more diversity in the cards’ actions, etc. That is easily solved through expansion packs, but it’s still unfortunate that the base version of the game feels a bit hollow. On the other hand, I appreciate what Eagle-Gryphon Games is trying to do: give curious players a low-cost bar for entry.

Baseball Highlights 2045 is the best sports-based board game I’ve ever played, and 1 of my favorite deck-builders out there. It’s smart, it’s fun, and it offers the tactical decision-making I’m looking for in a sports game without all the complexity that can bog down a first play. Mike Fitzgerald knocked this one out of the cardboard park. If you don’t like sports, you probably won’t be all about this game, but I do like sports, and I’m glad to see such a great tabletop implementation of a sport I enjoy.

If you’re interested in sports-themed tabletop games, you can’t go wrong with this one.