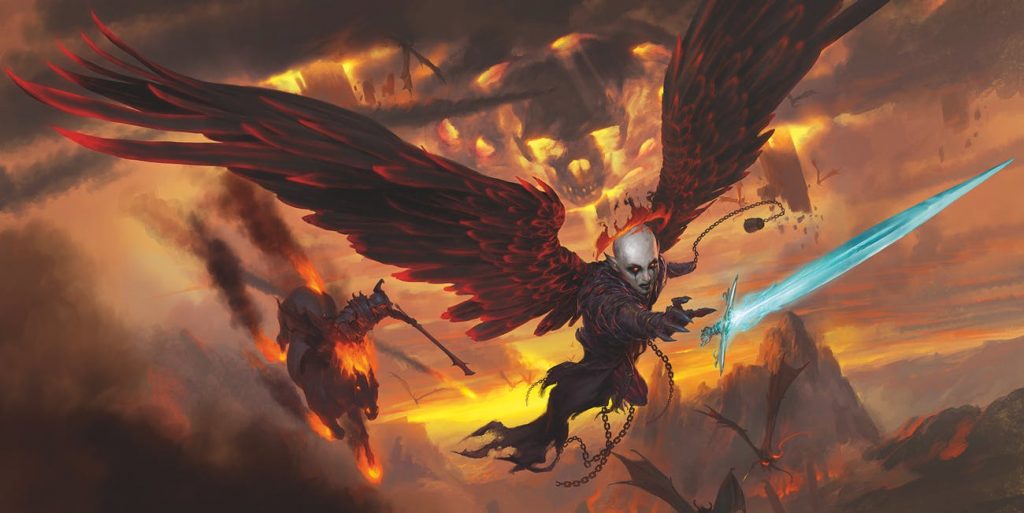 Baldur’s Gate: Descent Into Avernus is a Nine Hells-themed adventure book for Dungeons and Dragons Fifth Edition. Set in the corrupt city of Baldur’s Gate, players are caught in the middle of a demonic plot spreading from the nearby holy city of Elturel.

Players are encouraged to fight hard against the forces of evil, as they eventually battle deep into the first layer of the Nine Hells, riding war machines in the midst of the Blood War.

Descent Into Avernus might carry the Baldur’s Gate banner, but the game spends most of its time within the first layer of the Nine Hells. For those readers who are wary about involvement with any sort of supernatural, fictional angels, demons, or devils, this adventure book is not for you.

WotC has displayed a disclaimer on the credits page which warns players the evil characters and devils “…represent [evil].. [and are] meant to be fought and overcome. Wizards of the Coast fully endorses the kicking of evil’s butt.”

This is encouraging to read, and further cements an idea I’ve had rolling around in my head surrounding the demonic in D&D: Demons and devils should be played often as humorous, conniving sillies, and rarely as brutal, deep-voiced, terrorizers.

During those rare encounters with high CR demons, I’m game for playing Yeenoghu or Tiamat as powerful and terrible, but for the sake of others at the table, it can be exhausting. We are already surrounded by awfulness in daily life, so why not make these fiends more akin to the Red Guy from the late 90s cartoon Cow and Chicken?

So yes, if you are reading this and are already playing D&D, you are going to have developed some kind of Christian worldview on magic, spellcasting, slaying monsters for gold, running moral dilemmas in a fantasy setting, etc. However, I want to encourage readers that demons in D&D aren’t the same flavor of demons we believe exist in terms of biblical truth. Perhaps high CR demons reflect real-world demonic influence, but please remember: this is high fantasy gaming.

I gather that WotC designers have no intention of reflecting true evil and cruelty onto players. Consider these things, but by all means, if you still feel uncomfortable, stay away from this module. There are plenty of other demon-free adventures in the lineup.

When I first heard of the upcoming release of this adventure, the simple mention of Baldur’s Gate had me intrigued. I’m aware of the classic PC titles and sit quietly ecstatic for Baldur’s Gate III next year.

To WotC’s credit, Descent Into Avernus offers a few dozen pages on Baldur’s Gate, which is invariably enough information to run a homebrew campaign in the city. In fact the first of the five chapters in the adventure focuses entirely within the walls of the city itself.

Quickly, the story spirals down south and players are thrust into a momentous conflict with twisted creatures, devils, and lots of Mad Max-style vehicular combat. This is cool. For players looking for a sort of apocalyptic foray into steam, fire, and demonic treachery, look no further.

However, if you were hoping for a seedy web of lies fit in the alleyways and dark taverns–more akin to Dragon Heist–you’ll need to do the work to build such a story. The canvas WotC has provided is a great starting place, just know you’ll need to retheme most subplots and side quests to fit your story.

Most of the first chapter is straightforward, and there’s room to wiggle with DM-created side quests and exploration of the city. Once players pursue main quest-related stories, dungeons open up. In fact, I can see myself using a few of these as dungeon-templates in other stories.

However, once players move beyond Baldur’s Gate, they either jump into Avernus or leave and you can throw the book away.

This is where things get interesting. As a DM, you’ll need to read through chapters 2-5 very, very carefully. The book offers good insights into getting players to travel through Avernus. However, there isn’t necessarily a great way to communicate the paths available to your players. The adventure goes from linear to big, giant, open sandbox very quickly.

Sure, you can provide more direct instruction to your players, but it’s going to be a lot of work on your end. It’s not just getting them to each plot point, but also preparing NPCs ahead of time. Luckily, if you’re smart, you’ll prepare where you want them to go, and once they make a decision, run your session as if their intentions were what you’d prepared in advance.

I can see a lot of linear storytellers having problems with this part of the adventure, especially if players aren’t running after gold, but after the fate of two massive cities.

The conclusion to Descent Into Avernus is cinematic and thankfully, the adventure offers multiple paths to complete the story, including ignoring the fates of Elturel and Baldur’s Gate entirely.

One is how miserable a setting like Avernus is, and how it affects food, attitudes, and moral. For example, wine tastes like spoiled milk, or a successful quest still results in a small bug landing on a PCs neck and giving them an awful itchy bite.

Another resource is how to work out devilish and demonic pacts and deals with your PCs. Many PCs might be accustomed to this being horrific and bloody, but Avernus offers silly solutions with dire consequences. If my Warlock was still in our Homebrew sessions, I’d be running these with him, as they are far lighter and humorous than my initial attempts.

Finally, Avernus offers good rules for riding and building war machines. Think Mad Max and you’ve got it. War parties run the gamut of Avernus, so you’ll find lots of that here.

So, if these things sound exciting to you, this might be a good adventure to jump into. It’s not everything I hoped it would be, but I’m still interested, and the book offers plenty for a very-focused, good-aligned party to have lots of fun smacking down baddies.

A review copy of Baldur’s Gate: Decent Into Avernus was generously provided by Wizards of the Coast.