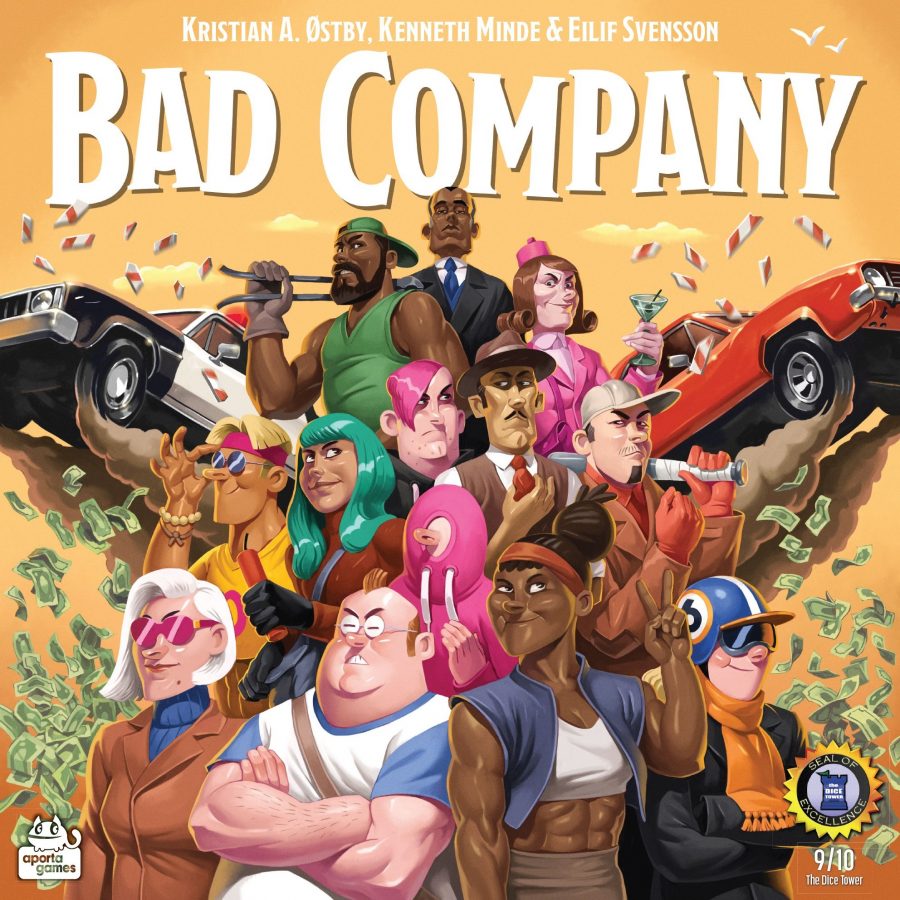 Bad Company is a game of dice rolling and tableau building. In this game, players assemble gangs of henchmen and carry out heists. Throughout the game, they work to upgrade their gang members, complete robberies, and stay one step ahead of the police!

The theme of Bad Company involves organized theft. This theme is presented much like it is in Burgle Bros., very tongue-in-cheek and self-aware. The artwork, gang names, and overall presentation are lighthearted and silly, but players should be aware of the game’s premise.

Bad Company is a tabletop spoof on heist movies like Ocean’s Eleven and The Italian Job. In this game, 1-6 players compete to carry out the perfect crime.

The goal of the game is to earn the most points. At the start, each player takes a left- and a right-side tableau board, which they combine to form their motley crew of thieves. They also choose 2 heist cards, which they will work to complete throughout the game.

In the central area are 2 small boards: a score/recruit board and a city board. On the city street, each player places the car of their color on the start space. The black-colored police car begins a few spaces behind.

Every turn, the active player rolls 5 dice—4 golden dice and 1 black police die. They then separate the golden dice into pairs, creating 2 numbers a la Can’t Stop. If they wish, they can pay $1 to reroll any number of dice, and this can happen multiple times. Once the current player has settled on 2 numbers, they activate the gangsters on their board with the matching numbers. Each other player can then use 1 of the chosen numbers to activate a gangster of their own.

When activating, the player receives all rewards shown on the gangster. Each gangster begins with only a single reward, but may be upgraded to grant more. Generally, rewards allow players to gain money, advance their car on the city street, or check off an icon. Heists are the primary use of icons, and they act as a contract fulfillment mechanism. Each heist shows a number of symbols, and players must check off all symbols on a heist in order to complete it.

As players move their cars, they will periodically pass checkpoints. Whenever this happens, the player receives the reward shown—either money, points, or a loot card—as long as the police car has not also passed that checkpoint. If the police are hot on a player’s tail, the player may choose to take a shortcut, but doing so means foregoing a reward.

After players have activated their crew, they may upgrade a gangster. This is done by paying the required cost to advance on the recruit section of the score board. Additionally, if they have completed a heist this turn, they receive an immediate reward and flip the card over. The back of every heist shows mission symbols like gold bars or diamonds. Players can earn bonus points for having the majority of a given symbol.

At the end of each turn, players move the police car according to the number on the police die, refresh their tableau to 2 heist cards each, and check to see if the game end has been triggered. This occurs when a player has either completed their 6th heist or entered the red zone of the city street. At that time, players take one final turn, and the player with the most points wins.

Bad Company is another strong offering from Aporta Games. The core mechanism of rolling dice and activating a card tableau reminds me of Space Base, but I like that this game does more beyond just that. The car chase is my favorite aspect—obviously, it’s just a glorified track movement system, but it fits the heist theme perfectly. This, combined with the goofy band of miscreants on the player tableaus, brings to mind classic “perfect crime” movies.

In terms of rules, Bad Company is pretty light, which makes it a great game for mixed age groups and experience levels. The decisions are simple, but not shallow. Each turn, players have a limited number of options for activating gangsters, spending money, taking shortcuts, etc. This decision space is far from overwhelming, but players’ actions definitely matter strategically.

This game has a bright production, with vibrant colors and amusing artwork. Nothing about it is over-the-top, but it works fine. That said, it feels like a missed opportunity that the money is simple cardboard coins. In a game about pulling off heists, it would have been more thematic (not to mention more tactile and attractive) to have metal bits made to look like gold bars.

Overall, though, I really enjoyed Bad Company. While I thought Space Base was a fine game, this one resonates with me more, probably because of its excellent theming. If you enjoy movies like Ocean’s Eleven or The Italian Job, then Bad Company might be a hit for you. Check it out.

Bad Company borrows some of its ideas from other games, but builds on them to create a highly thematic love letter to movies like Ocean's Eleven and The Italian Job. Highly recommended.