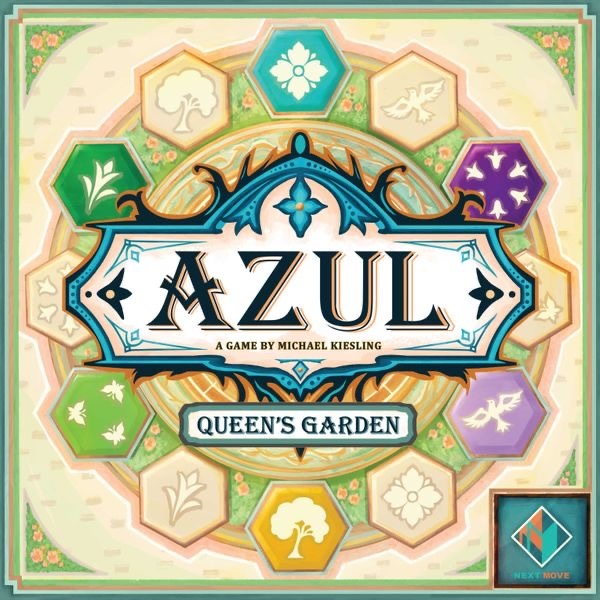 In Azul: Queen’s Garden, players try to make the best gardens for the Queen of Portugal by arranging different plants, trees, and other ornamental features to create patterns and sets. Only by carefully selecting your materials and strategically placing them out in your garden will you score the most points and impress the Queen!

Play starts with the first player taking a pattern or color of tiles from the current display area. Players can take either all of the tiles and garden expansions of a chosen pattern, or all of a chosen color, excluding any duplicates (this rule confused me at first because the rules don’t use the word ‘duplicate’). All chosen tiles or garden expansions go into storage, and if a player doesn’t have room for what they chose, they must make a different choice. If they take at least one tile from the current round stack, then that stack is taken off the pile and four new tiles are set on the next face-down garden expansion. If a garden expansion in the display area is ever left without any tiles on it after someone’s turn, it is flipped face-up and may be selected by the next player.

Azul: Queen’s Garden is played over four rounds, and each round is scored according to the wheel in the center. Points are also distributed at the end of the game for any sets of three or more, with another +6 bonus on top for complete sets of six. So if someone finished 6 trees it would be worth 12 points, and if they had a blue tree, blue bird, and blue butterflies it would be worth 6 points (1+2+3). The values of each tile are also their cost to play them, which is paid for by the tile or garden expansion itself, plus any tiles or jokers (stones) in your supply. This means that, to play the tile with 6 flowers on it, a player would need 5 other things, be they other tiles, jokers, or garden expansions.

This push-pull of having to use tiles to pay for playing them makes up the bulk of the strategy in the middle of the game, but players also need to plan for how they’re going to make sets of three by the end of the fourth round; it’s all good and well to stockpile large point tiles, but they must be paid for and they must fit on the board. A player cannot play any tile to a group that already has the exact same tile, nor connect two groups that would result in two exact copies existing in the same group. It feels complicated in the first round, but by the end of the first game, it’s pretty clear that duplicates = bad. Also, players hoping to see specific tiles show up could hope for a certain one based on what’s come out already, but there are only three copies of each tile, so adapting is usually better than waiting for a specific drop.

I like how the Azul series continues to give players plenty to think about without being heavy or confusing. The rulebook could have been slightly clearer in a couple spots, but if that’s the worst thing I can think of then it must be a pretty good game. Fans of the series will enjoy this edition, and newcomers could easily use it as a jumping-on point. If you like building tableaus and making satisfying patterns with tiles, you should check out Azul: Queen’s Garden.

If you like building gardens and making satisfying patterns with tiles, you should check out Azul: Queen’s Garden.