We don't go to Dunwich anymore... 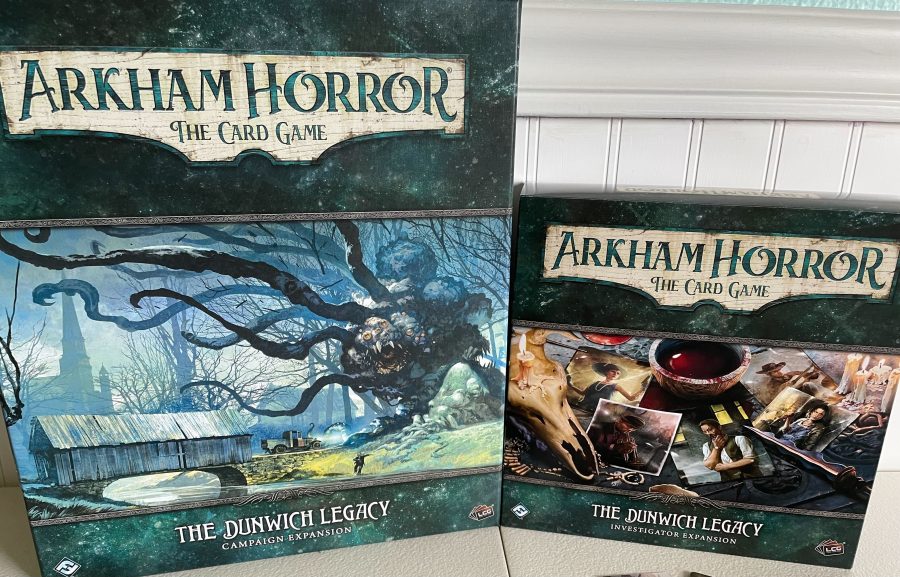 In The Dunwich Legacy players will respond to an old friend’s call for help, only to find themselves pulled into dangerous events that take them from seedy gangster clubs in downtown Arkham to the broken village of Dunwich, and possibly even beyond Time and Space themselves. Players will have to steel their grit and keep their weapons ready should they hope to succeed against the evils mounting against them. Do you have what it takes, or should you have stayed home this time? Read on for the review!

Players will battle mutated humans, evil entities with too many eyes/tentacles/teeth, and evil omens and hexes designed to slow you down or disable you. Many of the enemy cards just feature pictures of the enemy, but occasionally there is some blood. Magic is still an option for both players and foes, the latter causing players to discard cards or take horror or injuries.

The Dunwich Legacy is broken into two boxes, the Campaign and Investigators, just like the last expansion I reviewed. The same problems with this persist, in that if you’re trying to decide between them the campaign box is the obvious choice. The investigator box only has 2-3 unique cards for the 5 new investigators, and a deck you can build with, but no list or suggested builds for those of us who are time-strapped or lazy.

The 5 included investigators are Jim Culver, “Ashcan” Pete, Rex Murphy, Jenny Barnes, and Zoey Samaras. They are all very middle-of-the-road as far as their stats (willpower, intellect, combat, and agility) and health and horror levels, with only Rex being obviously a caster with his low combat and health scores. Also it is nice to see more names I remember from the original Arkham Horror such as Ashcan and Jenny Barnes, but I was disappointed that Jenny doesn’t start with her .45s, though they are in her deck. Ashcan does get to start with Duke, his loyal dog who fights better than he does, in play.

The campaign takes players to Professor Armitage, who tasks them with finding 2 of his missing colleagues. Players are allowed to tackle the first 2 scenarios in either order, but should take note that if they take too long with the first rescue something bad may befall the second abductee. This is a recurring idea throughout the campaign, that choices and failures will come back to haunt the investigators later on in the game. Each of the scenarios can also be played as standalone missions, and there are rules in the setup explaining how to shift for that.

After a few missions in, town players are taken on a wild ride on a train (note to self: never get on public transportation in or leaving Arkham) on their way to Dunwich, where they uncover the heart of the problem and hopefully, with the help of the townsfolk, they can stop what is happening before an unspeakable evil is unleashed on the world. There are a couple different points where if the investigators fail they can actually completely lose the campaign, ultimately failing to stop the downfall of humanity. Other times, failure can mean they become delayed and might find future tasks impossible or harder to accomplish.

I liked how the story started out simple enough (missing persons) then quickly jumped into the crazy evil from another dimension that players have grown accustomed to when playing Arkham Horror. But unlike the Edge of the Earth campaign that added new challenges and tokens into the mix, The Dunwich Legacy doesn’t add anything new. It’s great at what it does, but if you’ve been playing games set in the Arkham universe for years it feels a little too familiar. Most of the scenarios are fairly straightforward setups with regard to locales, with the exception of the final one, Lost in Time and Space, which was my favorite.

If you love playing Arkham Horror, The Dunwich Legacy is a decent campaign that will keep you busy for hours as you race to save lives, prevent rituals, and try not to go insane in the process. However, unlike my last review I’m not sure this expansion is a “must have,” as much as it is, “good for what it is, but doesn’t add anything new to the conversation.”

Players will find themselves up against unspeakable horrors, again. This is both a criticism and a selling point, depending upon how much of the same you want in your Arkham Horror.