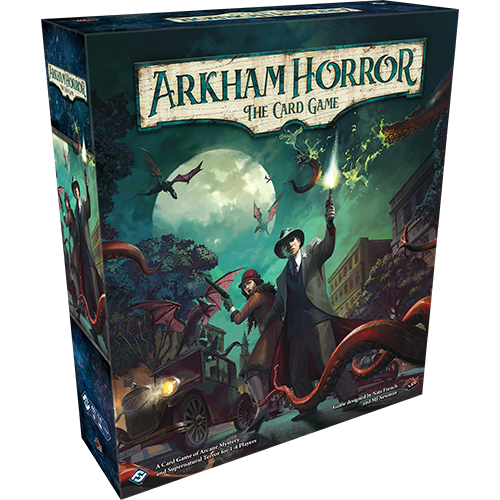 Arkham Horror: The Card Game sees 1-4 players controlling decks that hold the abilities, weapons, items, and weaknesses associated with their character, of which 5 come in the base set. Players will move around different locations, fight enemies, test skills, and investigate the creeping evils that lurk in the fictional town of Arkham, which at this point has to be the least desirable vacation spot in all of fictional board game history. So is this new version the bee’s knees or a screeching Byakhee? Read on for the review!

Several cards feature enemies, both humanoid and demon-like, in various stances and forms of attack. Several show missing skin, or bloody claws or teeth. The “Hypochondriac” card shows someone washing bloody hands, presumably so much so that they’ve worn off the skin and are causing self-injury.

Several cards are spells or tomes to help cast spells. 2 of the playable characters are powerful spellcasters, but enemies can cast spells as well.

Arkham Horror: The Card Game is a living card game, where when you buy a box or add-on you know exactly which cards you are getting. This is opposed to collectible card games, where you buy mystery packs hoping to get 1-2 amazing cards. That being said, the single campaign and the space provided in the box suggest that players will want to buy add-ons and expansions for Arkham.

When I heard about a remake of Arkham Horror: The Card Game (AH:TCG hereafter), I must admit I was confused. The original came out just 5 years ago, still holds a high rating on BoardGameGeek, and has enjoyed many expansions. But Fantasy Flight Games rebooted it, and managed to give players another ~130 cards for customization and upgrades, so let’s dig in.

Besides the extra cards, almost everything is the same in this version of AH:TCG. Players have the same base campaign and the same 5 starting investigators to choose from, so I’ll just say it now: I don’t know if this purchase will be worth it to you if you have the version printed in 2016 already gracing your shelves. If you’re going in brand-new, it’s a bit more expensive to get the new box (twice as much, actually) but you’re getting a lot of extra cards to be able to customize and upgrade your deck.

Play consists of gathering clues via passing skill tests, so that you can advance the story before too many bad things befall your group. Players start with a hand of 5 cards and a pool of resources and get to decide what they want to do on their turn. The game scales well with instructions on how to tweak each given scenario based on the number of players, another major upgrade from the last version which only supported 1-2 players (the new version supports 4).

I enjoyed being able to upgrade my deck with new and powerful cards each game, and it made me more invested in my character’s fate. You will want to set aside some bags or deck holders to help you, however; the last thing you want is for your character to save Arkham but get vanquished by a messy box. The open space in the provided divider (and the 3-game campaign) definitely suggests the purchase of more cards. And to be honest, I kind of want to buy more. The 5 investigators are somewhat different from each other, although the 2 gents and 2 women are fairly similar (guys have guns and attacks while the women are spellcasters) and the young girl Wendy Adams is a cross between the two archetypes. But since so many cards are included, it would be easy to make any of them your own.

If you can find a good deal, I would recommend this new version of AH:TCG to anyone who enjoys a good co-op deck builder with some Cthulhu-type enemies…so basically anyone who’s enjoyed a Fantasy Flight game in the past 10 years. If this sounds like you, then check out the new Arkham Horror: The Card Game.

If you can find a good price, and don't already own it, this version has a lot of customization and fun for 1-4 players.