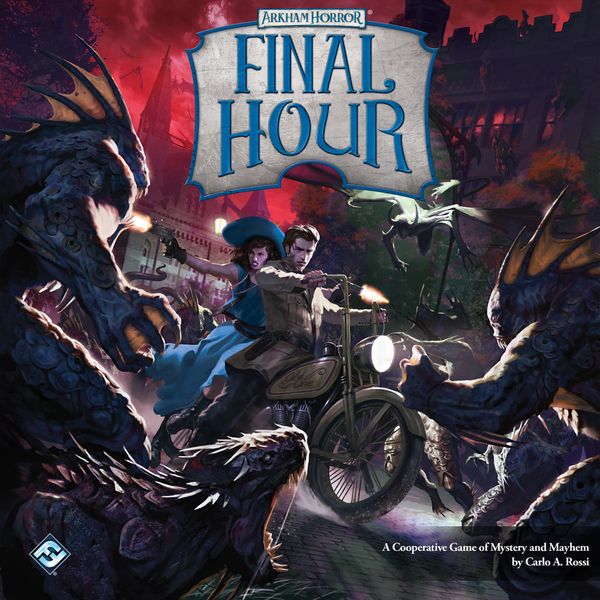 Fantasy Flight Games adds yet another title to their growing Cthulhu-mythos line of Arkham Horror games with Final Hour. What sets Final Hour apart is how streamlined it is compared to other games in the Fantasy Flight catalog; a full game can be set up and completed in under an hour and a half – even less for returning players! Read on and see if this newest trip to Arkham is worth the price of admission.

Players will fight otherworldly and evil monsters from the Cthulhu realm, as well as occasionally take damage from them. Blood and gore are not used.

The point of the game is to try and reverse an evil ritual which has set in motion the events of the game. During play there is also a chance of getting various magical items to aid players in their adventures.

Arkham Horror: Final Hour is the latest in a long line of cooperative and semi-cooperative games from Fantasy Flight that pit the players against evil beings that would love to see more tentacles, and for the world to end. Where Eldritch Horror tasks you with saving nothing less than the world, and the Arkham Horror game an entire city, Final Hour puts you on the campus of Arkham’s Miskatonic University, where an evil ritual has just been activated. Players must move around the board investigating, fighting, and generally keeping the end of the world at bay long enough to figure out how to put a stop to the evil at hand.

After the board is set up, play consists of an Action Phase, where the players take actions, and an Ancient One Phase, where the minions of evil ancient ones attempt to deliver your doom. In the Action Phase, players will look at the top card of their deck, and place it face down. They cannot discuss their actions. Then, they take one of their four Priority cards and place it face up on top of their action card. These Priority cards function like initiative – the lowest two cards activate the top half of their assigned action card, and the highest two activate the bottom half. It’s a lot like Gloomhaven, but you don’t get to choose, and often the players cards are set up so the top half is a cool ability, and the bottom is some combination of move, investigate, and bad things happening.

Speaking of bad things, after players resolve all their actions is the Reckoning step of the Ancient One Phase: players add up all the omen icons on the back of their Priority Cards, and consult the Ancient One sheet to see what happens. None of them are good, but the more icons you have the worse it will be. You then have to spawn a new gate, which means new monsters equal to the number of gate icons at that location as well. Then the Lead Investigator token passes.

As players investigate different locations on campus, they will start to reveal icons which will be placed at the bottom of the game board. If an icon is revealed, then players know that it isn’t one of the two hidden icons that were used in the ritual summoning. Finding which two symbols are the hidden ones is key in reversing the ritual and winning the game. The game is lost if either the ritual location on the board has no empty spaces and another monster or damage token is assigned there, or if any investigator dies, or if the investigators fail in attempting to reverse the ritual. To reverse the ritual the investigators each commit three Priority cards, each hopefully matching one of the hidden ritual symbols – each Priority card has one of the game’s symbols in the corner. After revealing the two hidden symbols, if the total investigator successes is equal to or more than twice the number of investigators, the players win.

If it sounds slightly convoluted with the Priority cards and hidden symbols, just know that it really isn’t and works quite well in practice. In back-to-back games with my usual group, we won once with exactly 8 successes, then lost with just seven in the next game, which was so down-to-the-wire that I didn’t even mind. The game is so streamlined that we were able to play twice in less time than it would have taken to play half of an Eldritch Horror game with four people, and with far more interaction and engagement. The Priority cards are a good move to try and curb quarterbacking, but I confess it didn’t stop me from trying. Co-op games have long tried to find that happy balance between everyone being on the same team, and no one getting pushed around or told what to do. I appreciate what they were trying to do, and since you’ll definitely be heading off in different directions most of the game it makes sense that you can’t 100% coordinate your plans.

Final Hour is a great jumping-on point for anyone who wants to try their hand at an adventure game based loosely on the works of H.P. Lovecraft. It’s also a good game for long-time veterans of the hobby, as long as they know it’s not as deep or involved as some past titles. But honestly it all feels like good forward momentum: you still get the fun of racing against the clock and trying to fight your way through hordes of monsters, but with far less setup or slow moments. If you have about an hour, why not use it to save the world?

A review copy was provided by the Publisher.