Don't worry about why the sharks are sailing in ships, just enjoy it! 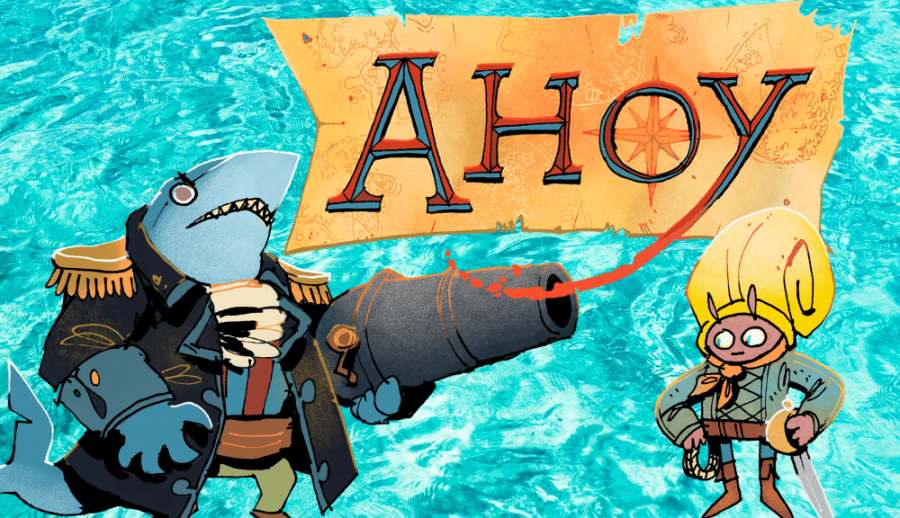 Last year it was Oath: Chronicles of Empire and Exile. Before that, it was Root. Now, Leder Games is back with another asymmetrical strategy game: Ahoy. While Oath was supposed to be Root but bigger and with more storytelling, Ahoy is a nautical, scaled-back version of Root. So, does it follow in the footsteps of its big brothers, or does this smaller sibling’s ship sink?

Each player will play as a faction. There are 3 factions in Ahoy. The Bluefin Squadron uses force and quick movement to command the seas, the Mollusk Union recruits comrades and stations them on islands, and the 2 Smugglers deliver cargo for rewards. When someone gets to 30 points, the game will end when that round ends.

Every round, players will take turns assigning 2 dice, which allows them to perform actions. The factions are asymmetrical, but they all share the basic actions of sailing, using tailwinds, loading cannons (leads to battling), and repairing a damaged ship. For point-scoring, the Bluefin Squadron and Mollusk Union compete to control regions, which vary in value. The Smugglers score points when they deliver cargo, and they can also score points through rewards that trigger when they deliver cargo or win a battle.

The factions all have asymmetrical actions. The Bluefin Squadron drops a shark patrol whenever they move, they can set up strongholds on islands, their ship can take the most damage, they have 2 slots for cannons (more firepower), and they can bombard an island in their region, which immediately removes all Mollusk Union comrades. The Mollusk Union can assemble and spread their comrades around different islands, and they have access to special 1-time-use plan cards. The Smugglers get special bonuses when they deliver cargo, and they can move around the map quicker than most ships. Moreover, when Smugglers deliver cargo, they will pledge that cargo to the Bluefin Squadron or the Mollusk Union, which means that the Smuggler will get points according to how many islands those factions control with the suite of the pledged card. This makes for an exciting guessing game and game-changing bonus points at the end of the game.

In addition to the asymmetric nature of each faction, there’s also crew cards available for recruiting. These crew cards grant their owner a persistent effect throughout the game, such as +1 in battles, more movement, and they can also grant their owner a dice slot for a more powerful action. Trying to recruit fun and efficient crew combos is a viable path to victory. These crew cards double as the goods the Smugglers must transport: on the bottom of each crew card is a good with a delivery location, and Smugglers can grab the card for free as cargo instead of paying the price for the crew member.

The player interaction is excellent in Ahoy. When Smugglers deliver cargo, they’ll increase the value of the region they delivered cargo in, which changes the area-control game the Bluefin Squadron and the Mollusk Union are playing. As the Bluefin Squadron moves about and sets up patrols and strongholds, they cause the Smugglers to either avoid them or battle through them. Of course, as players explore the map, the way they place the new tile changes the game for everyone. The tailwind action everyone has access to, while thematically questionable, allows players to teleport their ships to different parts of the map, encouraging battles. Battles are simple and quick, and it’s wonderful that the winner gets to choose from a couple different options: sometimes it’s best to deal a damage and steal a coin from the defender, sometimes it’s best to collect a Smuggler reward, and sometimes it’s best to just deal 2 damage. Damage covers up action slots on your ship so you can no longer place dice there.

The Mollusk Union and Smugglers are the more interesting factions at first glance. The Mollusk Union has a bunch of fun plan cards, which allow for some “Wait, you get to do that?” moments, and the Smugglers choosing their own rewards and cargo pledging make for an entertaining and varied go. However, the Bluefin Squadron is still a lot of fun (not just because they’re sharks) because of all the options they have, even if they are the simplest faction once grasped, without all the bells and whistles of the other 2. The balancing here is very good. The only problem we ran into was when a newer player was in control of the Bluefin Squadron, which led to the Mollusk Union running rampant and taking a fairly uncontested victory.

Ahoy also scales well. The 3-player game is actually the longest version, but even then, with experienced players, it rarely goes over an hour. Even with a bunch of new people, 1.5 hours was the most Ahoy ever went. It’s amazing that designer Greg Loring-Albright can provide a fairly deep, asymmetrical experience in under an hour. What I love about the 4-player version of the game, which is my favorite way to play, is that it’s actually pretty short because the Smugglers keep jacking up the value of each region, making it easier for the Bluefin Squadron and Mollusk Union to score points. It’s refreshing to play a game that takes less time with more players. If there’s any drawbacks here, it’s that the 2-player game is less interesting. It’s by no means bad, but having a Smuggler or 2 spices things up, and when playing with 2 players, you have to play with the Bluefin Squadron and the Mollusk Union.

Ahoy’s components are great. The indented player boards and exploration tiles work wonderfully, the dice are great, and the plastic insert neatly packs everything in the box. Leder Games helpfully included short quickstart guides for every player (essentially 5 paragraphs of text) that can help get games started right away (these are truly, wildly helpful, especially for all the different terrain types). This is the most I’ve enjoyed Kyle Ferrin’s now legendary artwork: the animal creature humanoids are entertaining, hilarious, and inspiring.

Root can sometimes feel overwhelming, especially to new players, especially if you’re playing with a bunch of different factions that score points in a bunch of different ways. I like the complexity, but it’s not the friendliest to new players. I also like that Ahoy’s point-scoring is simple: the Bluefin Squadron and Mollusk Union score points according to the value of the regions they control, and the Smugglers score points when they deliver cargo and reveal their pledged cargo at the end of the game. This is a game you can get new people playing in under 3 minutes, thanks to the simple scoring and quickstart guides.

Ahoy takes the cargo-delivery from Outer Rim and combines it with the area-control of games like Risk and Ankh. Is it better at either of those things than those games? Probably not. However, you get both of those in 1 game, and that 1 game is shorter than any of those titles. Even if you already own Root, if you like asymmetric strategy games, Ahoy is worth a try. It’s simpler than Root, which makes it a better introduction to the genre, and it’s a lot of fun in its own right. To put it in Star Wars terms, where else do you get to play as the Imperials, the Rebels, and 2 scoundrels/bounty hunters? If you’re not heavily biased to enjoy ocean-themed games, remove a point from my score, but know this: here there be monstrous fun.

Asymmetric area-control with heavy player interaction in under 75min? Yes please. Plus, there are sharks.