Review – Valley of the Shadow: The Spiritual Value of Horror 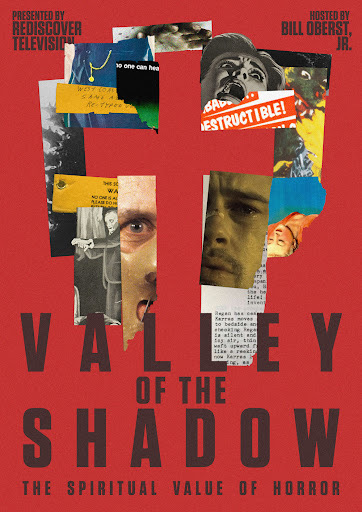 Documentarian, film professor, writer of the blog Battleship Pretension, and author Tyler Smith, is back once again with his newest documentary Valley of the Shadow. We at Geeks Under Grace reviewed his last film Reel Redemption when it was released in spring 2020.

Tyler Smith is a practicing Christian with a deep knowledge and admiration for film as an art form and he’s put a lot of effort into trying to use his documentaries as educational tools to teach Christians how to better engage with modern contemporary artwork. With his first film, he made the case that independent Christian films were a notable genre with the potential to grow into something meaningful. With his newest film, he takes on a more challenging topic by trying to convince Christians to embrace the wider horror genre.

Violence/Scary Images: Some infrequent but unsettling depictions of gore and death. The film uses clips from dozens of horror films that depict dead and decaying bodies, as well as blood and creepy imagery.
Language/Crude Humor: None.
Drug/Alcohol References: None.
Sexual Content: None.
Spiritual Content: Themes of hope, faith and walking through horrific situations.
Other Negative Content: Some unpleasant visual and thematic content that may unsettle easily sensitive viewers.
Positive Content: Themes of faith, hope, and pointing value and meaning back to Christ.

Disclaimer: Geeks Under Grace received a screener copy of the film to review from the film’s director

I reviewed Tyler Smith’s first documentary last spring. It’s been a while since I’ve watched Reel Redemption but I still think fondly of what I watched. It’s a very raw, low-budget documentary but Smith is a film professor to the core. He uses his time smartly in the film to build a concise history of the relationship between Christianity and cinema before digressing into a debate about the perspicacity of independent Christian films as a subgenre. Are they worthy artworks in their own right that future generations will study? He makes the case the genre may eventually mature and blossom into something notable! His second documentary is Valley of the Shadow, another low-budget documentary that just dropped on the Rediscover Television streaming app on October 20th.

Valley of the Shadow is more honed as a documentary but it’s also somewhat more lingering than its predecessor. The film is presented as a 2.5-hour semi-stream of conscious monologue that meditates on the spiritual depths of the horror genre in film and literature. I ended up watching the documentary over two evenings on and off just because of its length and other time commitments.

The film definitely benefits from a more honed theme though, if only because it’s taking on a more challenging thematic goal. Both Reel Redemption and Valley of the Shadow are functional arguments being made by a very open-minded Christian film critic to the overwhelming culture of Evangelical Americans that mainstream Hollywood films need to be engaged with, critiqued, understood, embraced, and possibly loved by us. Certainly, that’s understandably challenging given the American religious right has always been skeptical of “Godless Hollywood”.

With the horror genre though, he’s actively chasing down some of Christianity’s most aggressive taboos. Christians have been anti-horror for decades. It wasn’t uncommon in the past several decades for mainstream Christians to regard Dungeons and Dragons, Lord of the Rings, and Harry Potter as satanic and dangerous to the minds of vulnerable children. Horror films were arguably even worse because of their depictions of violence and demonic imagery and were always a BIG taboo in conservative Christian culture.

Thus is Tyler Smith’s mission; to try and make the case that horror can be a vital part of art with and without the Christian experience and that it can even be edifying to embrace horror films and stories as an expression of Christian values. To do that, he’s teamed up with Bill Oberst Jr, an actor and performer known for films like Rob Zombie’s 3 From Hell, Synchronic, Take This Lollipop, and dozens of other screen and theater credits. He’s also a professed Christian! Bill is a spectacular narrator for the project and manages to speak earnestly to his faith through Tyler’s script over the course of the film’s 146-minute runtime.

Valley of the Shadow presupposes there are four primary themes that Christians ought to contemplate when they view horror films: The Unstoppable, The Inevitable, The Abominable, and The Unknowable.

Each of these themes speaks to a different aspect of the horrific and grotesque as humanity experiences it. These themes encapsulate the essence of humanity’s fear of death, fear of human nature, fear of the demonic, and fear of the self. As Smith argues, most Hollywood films are rooted in some theme or bleak realization about human nature. This tracks with the Christian idea of sin very well. The Christian believes sin to be an aberration that haunts the human experience and slowly tears it apart, eventually leading to spiritual or physical death. By depicting them, audiences are able to come to terms with them and experiment with them in a safe setting.

Of course, these themes do not exist in a vacuum. One shouldn’t necessarily engage with dark subject matter for its own sake. Smith rightly attributes that these themes must speak to something. They must speak to the nature of hope that we see in the Bible. Smith rightly addresses that The Bible is a book filled with horrors. It’s filled with moments of supernatural activity, ghosts, monsters, uncertainty, death, desolation, violence, and demonic evil. It’s a book filled with moments of despair that real-life humans had to live through and come out at the other end. At the end of the day, what makes horror valuable is its honesty. It speaks honestly to the reality of human suffering but it only becomes meaningful when it finds the hope and light that makes life worth living in the midst of the depths of human evil. Oberst says it beautifully when he says:

“These stories make us afraid of the dark so maybe we’ll turn on a few lights.”

As with his first film, Valley of the Shadow at once feels raw and comprehensive. It’s a documentary for young and uninitiated cinephiles who haven’t seen it all or heard it all before. As a professor, Smith’s inclination seems to be to build his stories from the ground up and that means often taking pedantic detail and time setting up complex historical contexts. Smith cites dozens of films and goes in-depth about how they fit into wider movements and thematic contrasts of subgenres and thematic intentions within horror. The film offers a lot of individual insight into great horror films!

That detail isn’t entirely a good thing though. The film’s excessive runtime leaves Valley of the Shadow feeling somewhat excessive and unfocused at times. The movie’s narration is twirling from example to example, film to film, and offering great insights into each of the dozens of films it discusses but its length betrays its purpose. I wonder how much more effective it could’ve been if it had been mercilessly cut down. Then again, I don’t know which parts I would’ve cut out personally.

I’d be curious to see how the film’s target audience would react to it. I’d love to sit and watch it in a room filled with Evangelical Southern Baptists who believe horror movies are inherently evil and see how many people walked out of that room more open-minded. Alas, it’s hard to judge the films on those terms, speaking for myself. I’ve already watched most of the horror films he talks about and I fully agree with his thesis (see my former series Flawed Faith for further elucidation). Without that, I can’t say for certain whether Valley of the Shadow was an honorable misfire or an admirable work of Christian polemicism. It spoke a lot of ideas and cited films I was already familiar with. If you’re not already familiar with the horror genre, it would certainly make an excellent introductory course on the subject. By itself, I’d rank it as a smart and thorough—if raw and unfocused—documentary that I enjoyed.

Valley of the Shadow is certainly admirable and very well researched but it falls into some of the pitfalls of low budget and independent filmmaking. What works is held together by Tyler Smith's comprehensive research and Bill Oberst's earnest delivery.