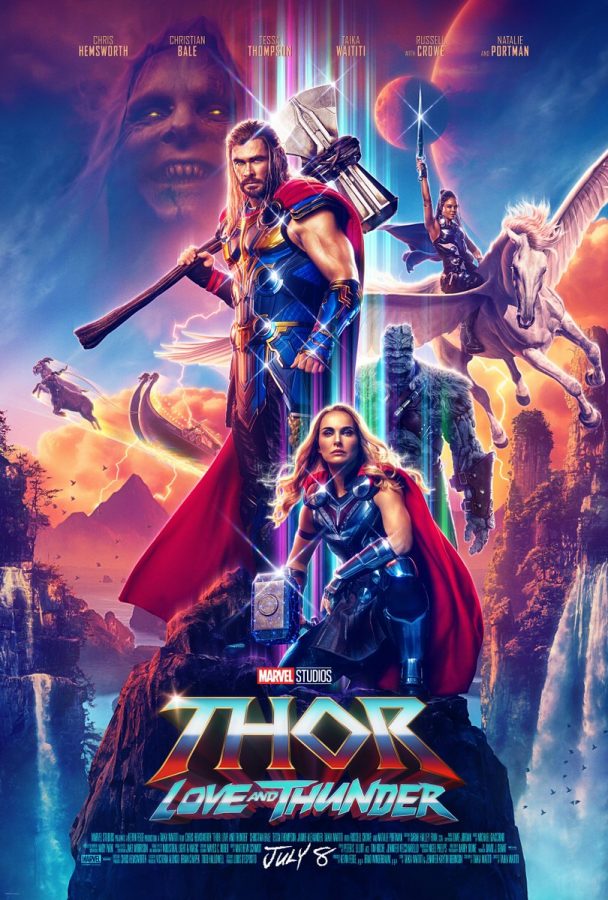 Thor is back! And so is director Taika Waititi to direct his second film in the franchise with the fourth Thor film! Waititi is one of our best living directors and he has spent the last seven years defining himself and his career as one of our most in-demand and creative filmmakers. So far, he’s directed What We Do in the Shadows, Hunt for the Wilderpeople, Thor: Ragnarok, Jojo Rabbit, and the season 1 finale of The Mandalorian, as well as a handful of episodes of Flight of the Conchords. He’s been attached to almost a half dozen projects since he broke out, many of them being in questionable statuses like a Star Wars film, We’re Wolves, and the live-action Akira film.

Violence/Scary Images: PG-13 action violence; several characters are stabbed and bleed golden blood.
Language/Crude Humor: Some swearing and language.
Sexual Content: One character describes how an alien rock species mates, and several overt references to lesbianism, homosexuality, and polyamory.
Drug/Alcohol Use: Characters drink alcohol.
Spiritual Content: Godhood is a major theme in the film, with pagan demigods sarcastically depicted as cruel hedonistic beings while a man tries to murder them for their cruelty.
Other Negative Themes: Themes of hatred, death, and atheism. Characters mock the concept of an afterlife.
Positive Content: Themes of love, redemption, and relationships.

I don’t like the fact that it’s probably going to be controversial that I liked Thor: Love and Thunder. This movie has definitely developed a reputation beforehand as a deeply POLITICAL and WOKE film long before it ever hit theaters, and in the end that reputation wasn’t totally uncalled for. It’s a movie filled with LGBTQ+ dog whistles and campy creative choices. And it’s definitely a film that, by its design, is going to fall into the movies the Marvel fans tend to dislike—much like Iron Man 3, Guardians of the Galaxy Vol. 2, and Doctor Strange in the Multiverse of Madness which prioritized auteur-ish themes and ideas that put off many of the fans. If you liked those movies, you’ll probably like Thor: Love and Thunder too.

The film is set in the immediate aftermath of the events of Avengers: Endgame, with Thor Odinson having joined the Guardians and now traveling across the galaxy helping people for money. When a distress call comes in from Lady Sif, Thor discovers that a mysterious being called Gorr The God Butcher is roaming the universe killing demigods. Thor arrives back on earth just as Gore is attacking New Asgard, and discovers to his shock that his former girlfriend Jane Foster is defending the town using his once destroyed hammer, calling herself the Mighty Thor. Now Thor Odinson and the Mighty Thor must team up together with Korg and Valkyrie to defend New Asgard and save a group of kidnapped Asgardian children.

As its title suggests, Thor: Love and Thunder is very much a love story. However, it’s a love story defined by the films that came before. Its story directly picks up from the events of Thor: The Dark World and Avengers Endgame, but its aesthetics are more readily drawn from director Taika Waititi’s previous work on Thor: Ragnarok. It’s a strange combination, given that the third film was specifically written to move the franchise away from the characters and ideas of the previous two films. The mix ends up being odd. Like its predecessor, the fourth film is far more light-hearted, colorful and whimsical than most MCU films, arguably to the point of detriment.

My fellow film critic Christian Toto, editor at Hollywood in Toto, scorched the film for these creative choices and compared it to Wonder Woman 1984, saying, “No one on set told the director he’s pushing the silliness too far.” He continues, “We thought “Batman and Robin” would forever prevent superhero films from aping ’60s-era camp. Taiki Waititi didn’t get the memo. And it’s a terrible choice Waititi abandons mid-movie. By then, it’s too late.”

While I agree the film is haphazard and somewhat underwhelming compared to previous MCU films, I wouldn’t say it’s nearly that bad. Waititi is a far more brave and competent director than Patty Jenkins for one, as his ironic work playing Hitler in Jojo Rabbit shows. He can make a movie where a character has an imaginary friend called Hitler that slowly unfurls into a tragic story about coming to terms with the nature of Nazism. It is true though that the tone shifts wildly at times in Thor: Love and Thunder.

The whimsy of the previous movie is somewhat lost by the halfway point as he’s faced with Christian Bale’s incredible work as the villain Gorr The God Butcher, who plays the role with such horror and malevolence that it barely fits into the MCU aesthetic at all. Gorr is, to borrow a turn of phrase, the world’s most militant atheist. He’s determined to kill all of the demigods in the universe in vengeance for the cruelty he faced when he confronted his own patron God’s apathy. The theme is even carried to its logical conclusion when Thor Odinson takes a midpoint detour to a city filled with omniscient demigods like Zeus who live decadent hedonistic lives while ignoring the needs of their worshippers. Gorr does have a point, but his cruelty and hatred are his undoing. He’s too corrupted by hatred.

What makes the film work for me is that it really earns those three-story arcs for Thor, Jane, and Gorr. These three characters build up the entire emotional and thematic core of the film to its final moments and really capture complete character growth for them. Thor is able to face his own sense of apathy, Gorr is able to (I’m not going to spoil that), and Jane Foster finally gets the grand fantasy love story that Natalie Portman always wanted to explore with her character.

Thor: Love and Thunder is definitely imperfect. It’s inferior to its predecessor which felt like it had a more decisive endpoint for its story. This one is more meandering and doesn’t want to commit to a big Thor story not knowing which acts may or may not sign on to whatever big event Disney is planning next. The love story though held the production together and smoothed over most of the elements I might’ve found annoying in a movie that offered me little to distract from them.

Thor: Love and Thunder is likely going to be quite divisive if its lax early response is any indication. It's a strange blockbuster with moments of bleakness, comedy, and bittersweet romance and may or may not work for everyone.