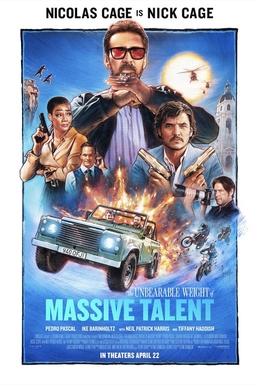 April 2022 has been an absurdly good month for original films in movie theaters—from the old school Bayhem of Ambulance, to the cathartic spiritual renewal of Father Stu, to the madcap insanity of Everything Everywhere All at Once, to the revolutionary epicness of RRR—there has been no shortage of original ideas, big ambition, and fun in movie theaters. Now to close out the month we have received the widely anticipated The Unbearable Weight of Massive Talent—a meta Nic Cage movie about Nic Cage movies starring Nic Cage as Nic Cage!

Violence/Scary Images: Cartoonish action violence, gunshots, car chases and some blood.
Language/Crude Humor: Extreme language throughout including dozens of uses of f***, s***, a**h***, and more.
Sexual Content: Crude offhand references to sex and pornography.
Drug/Alcohol Use: Characters drink heavily and there are scenes of extended drug use.
Spiritual Content: None.
Other Negative Themes: Depictions of family neglect and ego.
Positive Content: Themes of fixing family issues, overcoming ego, and connecting with others.

The film critic Jonathan Rosenbaum once wrote that “One of the most reactionary forms of cinema is the film in which fiction and nonfiction merge, trade places, become interchangeable.” There’s a lot of truth to this. Fiction and non-fiction are words that describe states of how we ought to interact with a story: as a historical event or a story that we can learn from. When you meld the two together, you can create meaningful stories but it does create problems. A movie like Orson Welles’ F for Fake can blend truth and falsehood together but if you don’t have a salient point to make with the blending you won’t accomplish very much.

This is especially true for “meta” or self-aware films, which acknowledge and comment on their own existence to say something about the subtext of storytelling or the culture around the thing it is satirizing.
The Unbearable Weight of Massive Talent is difficult to discuss for this reason — it is a self-aware semi-autobiographical film about the life and career of Nicolas Cage, starring Nic Cage as Nic Cage about Nic Cage. It’s a drama/action movie about two characters writing a drama/action movie about their family and lives wherein their real-life problems get solved by the act of being sucked into a Nic Cage movie.

There’s a lot going on here… or maybe not enough?

Nicolas Cage is one of the most well-regarded and famous movie stars on the planet, or at least he used to be, or maybe still is. I’m not sure. He’s famous for his utter decline in career trajectory in the past decade from an actor who would regularly star in massive Disney films like National Treasure and The Sorcerer’s Apprentice, to being the kind of actor who only acts in straight-to-Redbox films and cheap indie projects like USS Indianapolis, Willy’s Wonderland, and Left Behind.

At the same time though, his skill as an actor hasn’t declined. His excellent performances in Mandy and Pig run the gambit of Cage’s talent as a wacky/crazy nut job to an understated emotional actor. The Unbearable Weight of Massive Talent is definitely trying to align itself more with the former though; an astroturfed effort to backward engineer the kind of more artful side of Cage and simultaneously make it into a meta-textual commentary about the image of Nic Cage, how it reflects the man and how culture reacts to it.

If that sounds sophisticated then don’t worry, it’s not. It’s really just a chance for Cage to make offhand references to films like Con Air, Face Off, National Treasure, and Mandy in very obvious and unsubtle ways. There are some more subtle deep cut references, including a repeated joke of Cage talking to a CGI version of himself dressed as he dressed in David Lynch’s Wild at Heart—I suppose an extended homage to Withnail and I—that really just serves as an obvious metaphor for Cage arguing with his own ego. I’m not sure most of the references will go over people’s heads though if you’re familiar with his filmography.

It has major writing flaws though that make me think it needs to be critiqued, namely that all of its characters act like jerks. Cage, his family, and all of the people he meets act like irrational, wildly inappropriate, and inconsiderate monsters who are completely consumed with their own ego and prestige. Most of the film’s drama, as a result, feels cheap and cliche. This is usually a sign of a screenwriter trying to create drama but not fully realizing how to write complex characters without resorting to cheap storytelling cues.

The whole enterprise just has a vibe of being too cute, too clever, and too aware of how clever it is. It’s pretentious, in the most literal definition of that word. It doesn’t help that the melding of genres—a serious drama and goofy Nic Cage movie—undermines the actual themes. The film is nominally your classic dad-needs-to-learn-to-connect-with-his-family kind of story, and the moral of that story is usually that the dad needs to learn to stop working so much and be more attentive. This film does not earn that ending and instead turns into a movie where a character’s ego sucks two people he loves into a dangerous situation, only for them to forgive him for being a cool action man. That’s not a good character arc.

This reflects the danger that Rosenbaum describes above. If this film wants to be a metatextual commentary on Nic Cage films, it needs to find a way to subvert Nic Cage films and fully deliver upon some hidden tension or idea hidden within them, revealing something about them and the star it is deconstructing. That satire doesn’t go far enough and as a result, it feels like the story doesn’t answer any of the problems raised in a meaningful way.

I don’t want to sound overly negative. The Unbearable Weight of Massive Talent is an enjoyable film and one I have been rooting for based on the novelty of its premise. It’s funny and melodramatic in goofy ways and the meta aspects of the story put a massive clown noise in every scene that makes it hard to not excuse it. The movie is a self-justifying ouroboros of postmodern metatextual commentary on itself, a work of art commenting on itself and its own existence solely because it wants to be a self-aware Nic Cage movie about Nic Cage movies. I don’t think it earns its levels of pretentious self-regard though. This isn’t a Godard or Tarantino film with a point to make, ala the way Breathless and Inglorious Basterds are in constant thematic dialogue with themselves.

That said, I applaud it as an original movie that genuinely took some creative risks, and I hope the novelty of it draws audiences because I’d love for it to do well, but I can’t say it worked for me. While you’re at it, go support The Northman, Ambulance, and Everything Everywhere All At Once! April 2022 is an amazing month for original films and they deserve your support for taking huge risks, even if they don’t pay off!

The Unbearable Weight of Massive Talent is a jovial, funny, and metatextual joke about the career of Nicolas Cage, and it has clearly proven to be very endearing to many viewers. There are some loose thematic elements that undermine it but it would appear it is still enjoyable and I would encourage readers to give it a shot for being different and novel!