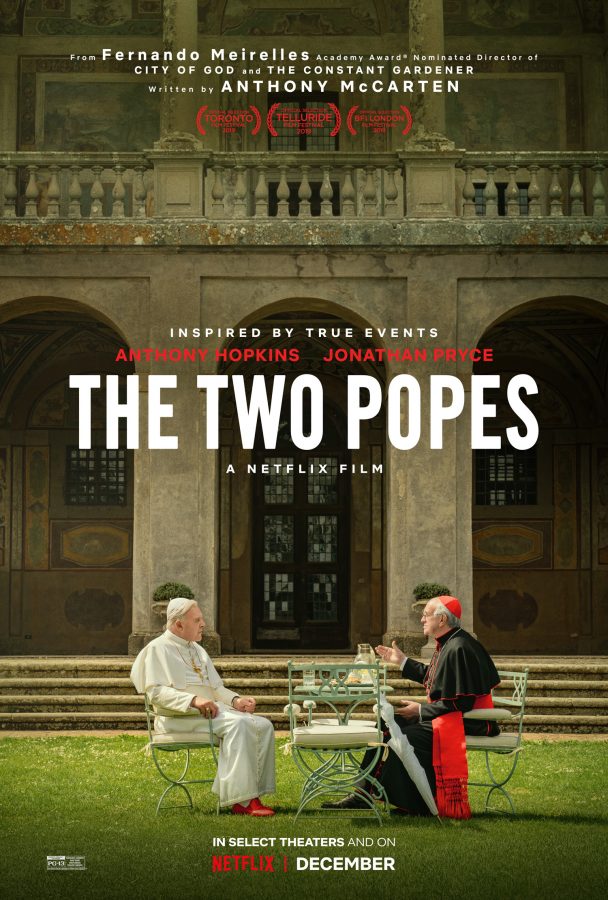 The election of a pope is one of the most hotly anticipated and controversial moments in the lifespan of the Catholic faithful. The average tenure of a pope is seven years, which means a person will usually live to see multiple popes in their lifetime. A pope is elected by a council of bishops and then expected to live out the position until his death. That was until 2013 when Pope Benedict resigned in response to his role in several major ethics scandals within the church, including the massive sex abuse crisis uncovered in 2001.

This drama was captured in the 2019 Oscar-nominated film The Two Popes, which explored the drama of this contentious moment in history through two amazing performances. The film was nominated for Best Actor, Best Supporting Actor, and Best Adapted Screenplay for the 2020 Oscars, as well as nominated for the Critics Choice Awards, British Academy Film Awards, and Golden Globes.

Violence/Scary Images: Part of the film takes place during an Argentinian Civil War where people are shot and killed; PG-13 levels of violence.
Language/Crude Humor: Some language including d*** and b****.
Sexual Content: Themes of sexual abuse, but nothing is depicted, only discussed.
Drug/Alcohol Use: Casual drinking.
Spiritual Content: The film follows the most powerful man in the Catholic Church and explores religious themes about God and faith.
Other Negative Themes: Some political themes that may annoy traditionalist Catholics, or that arguably serve to bolster the reputation of a controversial pope.
Positive Content: Themes of forgiveness, faith, confession, penance.

I was very late to catch Netflix’s The Two Popes, a biopic on the transition between Pope Benedict and Pope Francis in 2013. I didn’t watch it until this past fall, and when I did I was genuinely surprised by how engaging it was as a film. It is a contentious movie, and a potentially controversial one given the way it depicts the ongoing culture war between Progressive Jesuit Catholicism and Traditional Catholicism, but it is nonetheless a curious artifact of our culture’s widespread fascination with religion that tackles some challenging themes about forgiveness and guilt.

Hollywood doesn’t approach religion the way it used to. You won’t see a movie like The Belles of Saint Mary anymore, where Bing Crosby will play a priest and Ingrid Bergman will play a nun. You don’t see the Bible epics of old like Ben Hur or culturally spiritually morality plays like It’s a Wonderful Life. All we get these days are Mel Gibson films, which always come with awkward conversations… Religion today is the realm of the Arthouse, a subject to be explored by Terrance Malick dreamscapes like A Hidden Life, speculated upon by Paul Schrader’s unique brand of misanthropic anti-heroes like First Reformed, or disabused by deconstructionists like Darren Aronofsky for art films about environmentalism or feminism in films like Noah and Mother!

Sadly, The Two Popes is a film that doesn’t particularly thread the needle of that issue well or emerge unscathed, although it does manage to accomplish a lot as a character study!

The Catholic Church is unified politically under a catechism but internally it is a church divided by rigid ideological lines. There are conservative traditionalists on one side and progressive modernists on the other side. Officially, they all agreed on major questions of theology but they differ widely in practices, placing different restrictions on the church’s liturgical rites, official stances on abortion and homosexuality, and the right to declare who can receive the sacraments, specifically those who live outside of church teaching. The film is an explicitly partisan movie that falls into mainstream media’s abiding love affair with the IDEA of progressive reform in the Catholic Church but doesn’t really understand what that means or why it should be achieved (i.e., it’s almost impossible to reform the Catholic church to the point where it allows gay marriage or approves of Marxism).

The Two Popes is clearly rooting for one side of this debate. The film follows one of the most fascinating and contentious moments in modern religious history, the election of a new pope. It frames the election of Pope Benedict in 2005 as a kind of failure on the part of the church, a middle step between the conservatism of Pope John Paul II and the supposed progressivism of Pope Francis who is depicted as a man of the people who wants to feed the hungry and save refugees. The movie ends up hanging a lot of baggage on Pope Benedict’s failures, failures that went beyond him that he nonetheless was guilty of perpetuating, namely the sexual abuse crisis and several Vatican ethics scandals.

When the film finally reaches the inauguration of Pope Francis, he declares that “the carnival is over” and declines to wear his traditional clothing, preferring cheap shoes and simple vestments as a political statement. It then cuts to a montage of the new pope touring the world, feeding the poor, and seemingly trying to take steps to fulfill the idea of internal reform in the church.

Regardless of your thoughts on this culture war, The Two Popes does a really interesting job in exploring the fascinating minutia of the process of the Papacy, as well as depicting the complex inner lives of Pope Benedict and Pope Francis in a particularly contentious moment in the Catholic church’s history. The significance of the title is that there hasn’t been a period in world history where more than one recognized Pope was alive at once. There was a brief period between 1378–1417 where three popes were ordained but not recognized by differing factions of an ongoing schism. It is a historical oddity at the moment in 2022 that Pope Benedict and Pope Francis are still very much alive, as it was in 2013 when Benedict resigned.  It is this oddity that The Two Popes dramatizes.

The film is a magical character study for Anthony Hopkins and Jonathan Pryce, two of the best living actors who play the roles of these figures with a deep sense of reverence and emotional complexity. Hopkins carries a grizzled weight upon his soul, reflecting his life failures. And Pryce similarly carries the hopeful burden of a man who wants to reject his destiny to pay penance for a lifetime of failing to stand up to authoritarian regimes in his home country of Argentina. Both men turn out to have much in common, both being men who grew up in totalitarian states and who carry the burden of regrets for not doing enough to improve the world (Benedict, also known as Joseph Ratzinger, was a teenage conscript for the Germans in World War II).

Most of the best stuff in the film is just the film’s dialogue, of these two brilliant orators and theologians, two of the most educated and theologically knowledgable men alive talking about minor aspects of faith and also bearing their souls to one another, admitting the depths to which they feel isolated from God and the necessity of popes to seeking confession for their deepest and most complex failures. The core of the film’s drama is how both characters can respond to their failures, what responsibility they have to the world and how they can live it out. Benedict feels lost to God, no longer capable of hearing the voice of the spirit of God and feeling a need to confess his sins. This ends up placing a burden on Francis, who approached the pope seeking a resignation but instead found himself endorsed for the position of pope.

The Two Popes is a fascinating and engaging biopic that I’ve now revisited for a second time! It is a curiosity insofar as it is delicate, quiet, and intelligently exploring complex issues of faith but also serves as a kind of soft propaganda film for Pope Francis, who remains one of the most controversial popes of the last century. There are multitudinous realities one could correlate and spin-out discussions of based solely on what this film does and doesn’t choose to depict in these debates. By itself though, it’s a lovely film and one of my favorite things Netflix has produced in years!

+ Great performances by Pryce and Hopkins
+ Fascinating themes of guilt, faith, and confession

The Two Popes is a wonderful work of drama, albeit one that falls into the realm of Oscar-Bait, that also indulges some bitter problems within the Catholic Church's ongoing culture war. It does have a lot to say about these two great theologians and offers introspective themes about forgiveness and faith.