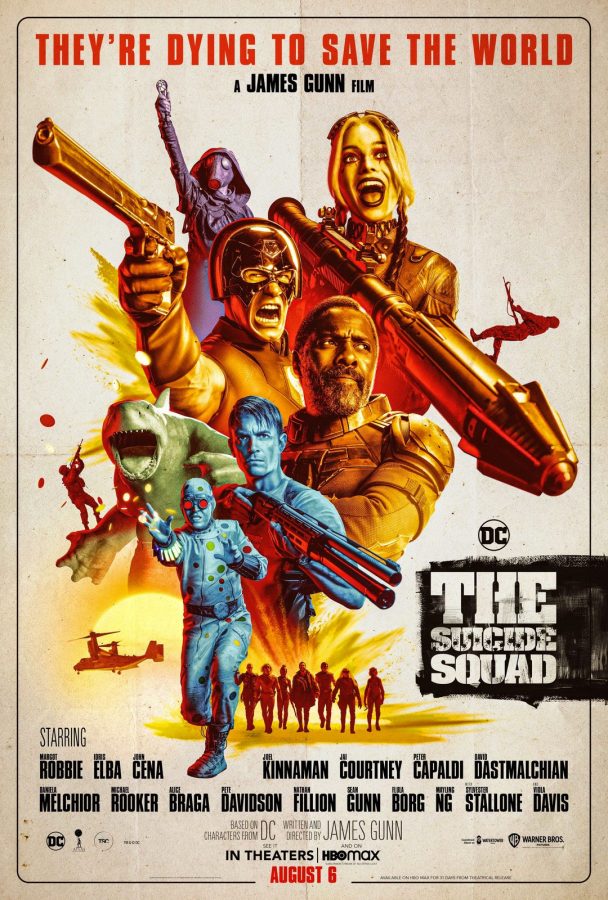 I’m somewhat nervous to review another DC film. I was on the more negative side of reviews for Zack Snyder’s Justice League (despite finding it engaging and interesting) and I’m similarly on the negative side of criticizing David Ayer’s Suicide Squad from 2016. This past week, Ayer himself disowned the film in a bid to convince Warner Brothers to allow him to #ReleaseTheAyerCut and get another chance to re-edit the film. Regardless, I have no innate DC or Marvel bias. My favorite superhero is Superman and I gave Avengers Endgame a 7.3/10 score. I also generally like the MCU films better than the DCEU films except for Shazam and Joker. I review movies as individual works and not as pieces designed to advance individual artists’ careers or hold up the backbone of a franchise (believe it or not though I don’t actually enjoy disagreeing with DC and Marvel fans…).

All that said, I have been genuinely interested in The Suicide Squad (2021) as both a sequel to its predecessor and as the comeback film for Hollywood’s most infamous comedic director James Gunn. He famously lost his job with Disney in 2018 just prior to starting production on Guardians of the Galaxy Vol. 3 when journalists dug up gross jokes he’d put on Twitter prior to working for Disney in 2012 that referenced everything from pedophilia to rape. He was subsequently rehired by Disney in 2019 after the controversy boiled over, but that was after Warner Brothers picked him up to direct a sequel to a film they’d already made which had ripped off Guardians of the Galaxy. GOTGV3 is currently slated for release in May 2023 alongside a Disney+ exclusive Christmas Special in December 2022.

Violence/Scary Images: Extreme R-Rated violence throughout. Human bodies are destroyed and gored in every way imaginable (stabbed, sliced, shot, exploded, eaten, burnt, squashed, electrocuted, polka-dotted, starfished) and some of the deaths are be quite grizzly and painful. Multiple close up shots of injuries, where sometimes the camera even travels inside the wound. Two instances of animal cruelty (CGI); one animal killed on screen by being squished, while others are killed off screen. There are sequences involving thousands of rats—film not recommended for those suffering from musophobia.
Language/Crude Humor: Severe language throughout; dozens of F-bombs and other severe language including taking the Lord’s name in vain (although it’s later placed within its proper context).
Drug/Alcohol References: Casual drinking at a bar. A character smokes a cigarette.
Sexual Content: Two characters have sex offscreen and there are crude references of male genitalia. There are two scenes of frontal nudity, both male and female.
Spiritual Content: A character remarks casually that God doesn’t exist. Another character starts thanking every version of God they can think of because their friend survived.
Other Negative Content: Extreme meaningless violence, gore, nihilism and dark content that will unsettle children or sensitive viewers.
Positive Content: Themes of redemption, friendship, understanding and truth.

Whatever can be said for or against James Gunn, he’s a very talented artist who has a real heart for bleak, emotionally damaged characters who learn to put aside their differences to give a crud about the world around them. In that sense, he was possibly the ONLY director who could be brought on to make a film like The Suicide Squad work.

The movie is an absolute riot and a vast improvement from its predecessor while also being a direct continuation of the story of the first film. As the film starts in media res, Amanda Waller has turned Task Force X into a consistent black operations team for the United States that’s regularly capable of getting results. The film opens with a team of D-list DC comic characters being loaded up onto a helicopter and dropped out of the back of a plane to start a mission on the fictional island of Corto Maltese. Immediately, things hit the fan and a half-dozen superpowered beings are brutally eviscerated and left for dead.

From the word go, The Suicide Squad tells you the movie you’re watching is funny, brutal and that death is going to be a casual thing going forward. No character is safe and anyone in this cast of C-list assassins and freaks is technically on the chopping block (with the possible exception of Harley Quinn since Margot Robbie seems to actively love working with Warner Brothers and is probably still campaigning behind the scenes for a sequel to Birds of Prey).

Much of this is to be expected. James Gunn is an intensely funny writer but his pre-MCU reputation was as a schlock-meister and nihilist. He made body horror films like Slither and dark genre deconstructions like Super. The Suicide Squad, being an R-Rated superhero film, gives him more freedom on a major film than we’ve likely ever seen and he doesn’t hold back his every cinematic instinct. This is a movie that absolutely relishes in the silliness and meaninglessness of its premise as characters with no moral compass are sent out into the world to murder their way through their problems on behalf of a government that doesn’t acknowledge their existence.

The film doesn’t hold back on just how dark the premise can get as well. There’s a lot of stinging criticism on display about the nature of American foreign policy and how countries go about their dirty work in illicit and morally abhorrent ways (the titular “Suicide Squad” themselves being yet another expression of American military power being unleashed upon poor and innocent developing nations). Seriously, some of the content here is among the darkest story material that James Gunn has ever cooked up, up to and including his writing in films like Tromeo and Juliet or Toxic Avenger. It’s probably fair to say he has a lot of resentment built up in his system that he’s working out…

When the film isn’t being dark, it’s either trying to make you laugh at its absurd humor or indulging in just how violent it can possibly get. Again, these are characters with no moral qualms about killing people and the multitudinous ways in which human bodies are crushed, sliced, shot, eviscerated, burned, eaten and otherwise defiled is impressive. This is the kind of film that’s made for action fans who love indulging in movie violence and it’s unapologetic in just how much it enjoys desolating the human body.

At times the film feels like a total lark. Maybe that’s all it needed to be but James Gunn is still James Gunn. He probably could’ve gotten away with just making a funny and violent action movie but he actually does a good job making the film feel more substantive than it needs to be. While the movie never fully embraces the emotionally heart-wrenching depths of either of the Guardians of the Galaxy films, it’s still peppered with enough emotional moments and connective tissue that these characters actually end up feeling like real people. You get a sense of just how deeply isolated most of them are because of their tragic backstories, and the fleeting moments of connection they feel with each other end up making their choices later in the film feel somewhat earned.

Almost all of the characters in the B-team end up being highlights in that regard. Idris Elba shows up to play as the film’s lead, Bloodsport—a nominal replacement for Will Smith’s character Deadshot but honestly a performance that outclasses it and finds more depth in its portrayal of amoral vigilantism than what the first film achieved. John Cena shows up as the brutal Peacemaker, an ultra-jingoist American soldier who is willing to do anything in service of his country (for better and worse). Sylvester Stallone voices King Shark, a giant shark-man who alternates between being the film’s most naively innocent character and its most brutal as he constantly rips people apart or eats them whole. The best performance though might belong to Daniela Melchior as Ratcatcher 2, the daughter of Ratcatcher (Taika Waititi in a small but emotional cameo) whose power is that she can speak to and control rats (which ends up being weirdly useless as far as superpowers goes).

And for good measure, most of the usual staple of James Gunn friends all show up for small cameos: Michael Rooker gets a small role as Savant, Nathan Fillion gets a cameo as Arm-Fall-Off-Boy and Sean Gunn cameos in the role of Weasel, a human sized weasel known for eating children.

Everyone really shows up to play and gives the film some added emotional depth that keeps it from delving too deeply into depravity and meaningless violence.

As far as I can tell, The Suicide Squad is a film that doesn’t quite attain any sort of career heights but I found the movie genuinely engaging and rewarding. It’s narratively clean cut, sharp, angry and almost every joke the film pulls hits very well to the point where there was at least one point where I was laughing uncontrollably in the theater. It’s hardly insightful and to be frank I can imagine a thousand reasons why an average audience member is going to walk away from the film feeling disgusted or frustrated by it. It’s DEFINITELY not a film for everyone. That said, I think the film finally does deliver upon the promise the Deadpool films set out to try to fulfil. Its attained the heights of being a pitch dark genre parody while still being a solid story in its own right.

For what it’s worth, it’s probably the best piece of blockbuster studio filmmaking in 2021 (if you can handle it)!

The Suicide Squad is a wonderful work of ultra-violent action filmmaking and a strange work for director James Gunn. It's an energetic, angry and surprisingly touching film that draws on the violence and empathy that has defined his entire career up until this point, successfully resurrecting a dead franchise!