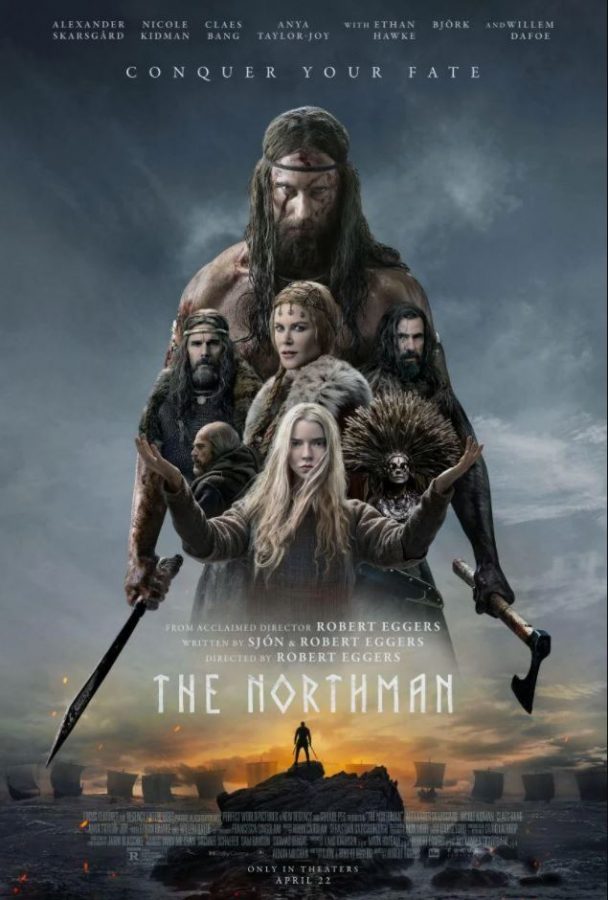 Robert Eggers has developed a unique career path for himself in modern Hollywood. His breakout 2015 film The Witch was a triumph of modern horror filmmaking; a slow-burn thriller about a puritan family trapped in the wilderness with a coven of child sacrificing witches, but also a commentary on patriarchal norms in Christian puritanism set against the libertine freedom of the witches. His 2019 film The Lighthouse was a universally beloved dark fantasy story; a mythical retelling of the legend of Prometheus set against the mundanity of two frustrated men trapped alone in a lighthouse during a storm.

His work is defined by deep attention to detail, a heavy atmosphere, and a fascination with using mythology and fantasy to tell very modern stories about theocracy, oppression, toxic masculinity, and violence. Now his third film has finally reached theaters. The Northman is a Viking epic set against 10th century Pagan Europe that loosely retells the legend of Amleth—a Danish legend that would later inspire Shakespeare’s Hamlet.

Violence/Scary Images: Extreme violence and brutality throughout, with characters dying, having their limbs torn apart, or otherwise being gored and left as a dead husk. One character is decapitated and his head is preserved.
Language/Crude Humor: Infrequent language such as b**** and w****.
Sexual Content: Several scenes of implied sexual assault and sexuality. A woman is seen fully naked in one scene. Characters have brief sex scenes in distant shots and sit naked with each other.
Drug/Alcohol Use: Drugs are taken during rituals and alcohol is consumed casually.
Spiritual Content: Christianity is mentioned once in the film in a negative context, but all of the characters are either Norse Pagans or witches, and practice their religion through idol worship, human sacrifice, and violence.
Other Negative Themes: Depictions of slavery, rape, pillaging, and human sacrifice, often which go uncommented upon.
Positive Content: Themes of honor, justice, family, and love.

The Northman has a very simple story, but it is an old and familiar one. Eggers’ style brings it to life beautifully and uncompromisingly as an epic, both fully alive in its vision of the world and emotionally distant from some of the colder aspects of this time in history. 10th century Scandanavia was, of course, a time of brutality. The Norse religion of its people was a warrior religion—a spirituality where the old gods would allow their worshipers to rape, pillage, and blood feud amongst themselves, where vengeance is a virtue and human sacrifice is pedestrian.

The story follows the titular Amleth in the aftermath of the destruction of his kingdom. His father is murdered by his brother and the young prince is chased off into the wilderness and picked up by a Viking raiding party. When he discovered a group of slaves being carted off to serve his brother, he brands himself a slave and sneaks about their sailing vessel en route from Scotland to Iceland, where he slowly begins to earn the trust of the man he plans to kill.

The film is a marvelous work of epic storytelling. It feels uncompromising in its willingness to bring the ancient world of the Icelandic Sagas and The Poetic Edda to life with vitality and breath. This is a living, breathing vision of the living world we see depicted in Beowulf, of warrior kings and glorious acts of bravery. This is a movie that feels like it could’ve been made by someone of this culture—a living testament to a world where great deeds and great deaths earn one a seat in the halls of Valhalla. Egger’s filmmaking makes it feel alive and lived in. His set designs capture an intense detail, showing us the life of Pre-Christian Europe with an incredible eye for visual fidelity.

Eggers is a curious filmmaker, insofar as he’s an intensely talented student of myth but also a deeply progressive voice who seems interested in subverting the nature of those myths for modernistic ends. It’s tempting to accuse him of falling into the same Neo-Pagan temptations as writers such as Marion Zimmer Bradley, whose epic The Mists of Avalon retold the King Arthur legend as a story of feminine suffering under the heel of the Christian boot, and the slow death of the divine, naturalistic, feminine witch.

The Witch was even praised and endorsed by The Satanic Temple, a non-theistic Satanic human rights organization that advocates against organized religion, when it was released in 2016 for its portrayal of “the plight of women and outsiders throughout history who suffered under the hammer of theocracy and yet fought to empower themselves.”

The reality though is more mundane. As Eggers said in a recent podcast with comedian Marc Maron, “Growing up in a secularized society, there isn’t a lot of the sublime around.” He said, “living in a mythological system where everything around is imbued with significance is appealing to me.” Eggers is clearly fascinated by religion and spirituality but is intellectually disengaged from it. The result is that these ideas become tools for him to tell stories that project his understanding of the world—modernist morality plays.

Consider that The Lighthouse borrows heavily from the story of Prometheus Bound, the Greek play by the poet Aeschulyus about the god who defied Zeus and raged against the will of heaven, a play that deeply inspired Karl Marx.

There is a layer of modernist subversion to The Northman. At the story’s halfway point, there is a curious turn where our protagonist’s motivation is undermined by a dark revelation about the nature of his quest that threatens to undermine his drive and certainty. Amleth starts the film repeating to himself a chant that he must avenge his father, save his mother and kill his uncle for his crimes. The revelation throws that certainty into chaos, undermining his certainty in the morality of his actions, and revealing to him just how exploitative and cruel his slave-driving Viking culture truly is.

Such a revelation though hardly dents the certitude of Amleth. Unlike his successor character Hamlet, Amleth is a determined warrior with his eyes set on vengeance. He doesn’t have time for wimpy Hamlet’s existential angst about the nature of truth. He seeks his justice, sees his enemy fight in combat, and battles until he sees the gates of Valhalla open before him. Of his three films though, The Northman feels the least subversive. It neither loathes the Calvinists of The Witch nor embraces the oppressor-oppressed dynamic explored in The Lighthouse.

It’s an extremely lively film and one that functions by feeding life and vitality into the real-life humans that history recalls now as the Vikings. Their culture is largely lost to history, preserved in the volumes of the Eddas, but largely incomplete as their oral and religious traditions have been mostly lost to history. The film feels like an attempt to visualize those cultures, to bring back the stories of Norse Legendary prowess and brutal justice to life in a way that energizes these sorts of archaic pre-modern morality tales.

Curiously the film’s attention to detail and history seems to have given the film a reputation that it’s impenetrable and difficult to understand. The early test screenings of the film came back with feedback like, “You need to have a master’s degree in Viking history to understand, like, anything in this movie”.

Speaking for myself, I’ve read Neil Gaiman’s Norse Mythology and watched the Thor movies several times and I don’t think there is anything deeply alienating about the film. It isn’t like a revenge story is hard to understand. I can’t speak for other people though. It is brutal, violent, and unflinching in its ideas. It’s a long-winded and extremely violent meditation on the nature of cycles of violence and the ruthlessness of pre-modern warrior cultures, many of its ideas I’m sure are also intended as reflections on modern culture as well. It’s full of references to Odin’s Raven and archaic rituals. I don’t imagine that a two-and-a-half-hour Pagan revenge epic will be well suited for everyone.

As far as this kind of story goes though, The Northman is excellent. It’s a beautifully made film that uses its relatively low budget to draw one of the most exciting and engaging epics in recent cinema.

The Northman is an epic in the truest sense of the word, and an excellent continuation of the works of Robert Eggers after his breakout success with films like The Witch and The Lighthouse. He rounds out his trilogy with a massive film that manages to capture a classical tale of Pagan vengeance.