Review – The Most Reluctant Convert: The Untold Story of C.S. Lewis 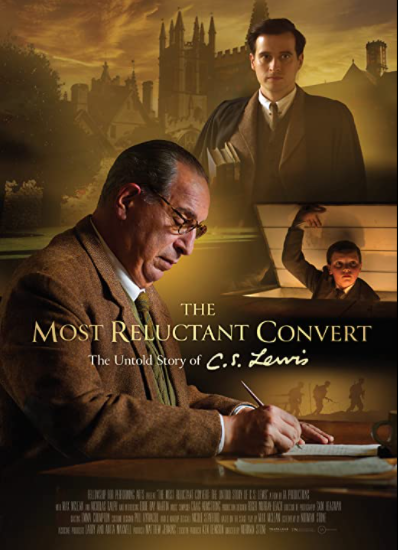 Max McLean has been a forceful Christian and an actor for decades. He founded the Fellowship for Performing Arts in 1992, recorded The Listener’s Bible which is available free online, and has performed multiple stage plays across the United States including adaptations of the Gospel of Mark, classic Christian plays like A Man for All Seasons, and original plays based on the novels of C.S. Lewis.

With the onset of COVID-19, he’s been forced to shutter his stage plays for over a year and a half but decided to put his time and money into a larger project. Using the script for his critically acclaimed stage play, he’s worked with a team of filmmakers to craft FPA’s first film adaptation: The Most Reluctant Convert.

Violence/Scary Images: A brief scene of military combat with gunfire and death. No gore or blood. A character is described experiencing spiritual torture and suffering in hell.
Language/Crude Humor: None.
Sexual Content: Brief discussion of youthful sexual temptation; nothing graphic or inappropriate for young viewers.
Drug/Alcohol Use: Frequent casual drinking and smoking throughout the film.
Spiritual Content: The film is a conversion story that explores the nature of faith, God, occultism, atheism and spiritual joy.
Other Negative Themes: None.
Positive Content: Themes of faith, hope, joy, intellectual growth, and maturity.

I’ve been following the work of the Fellowship for Performing Arts for several years now. I first heard of them when Max McLean appeared as an interview subject on The Andrew Klavan Show back in 2017, but really started taking them seriously in late 2019. I was very lucky to see the stage version of The Most Reluctant Convert performed live in March of 2020 at Northwestern University just before the COVID-19 lockdowns shut down society at large. Around this time as well, the company staged their critically acclaimed stage adaptation of Paradise Lost in New York City. The company is arguably one of the most interesting touring groups in modern Christendom and has produced fascinating renditions of The Great Divorce, The Screwtape Letters, and other plays like Martin Luther on Trial, Shadowlands, and A Man for All Seasons.

Unfortunately, COVID forced the company to roll back live performances for over a year. Thankfully, the pandemic hasn’t affected the company’s ability to stay productive. The company was kind enough to perform free Zoom renditions of several of their productions to entertain their fans. With time on their hands, they even decided to do something ambitious.

In the summer of 2020, the company came together and decided to produce a filmed version of their most popular stage play. The company even brought in British director Norman Stone (The Narnia Code, CS Lewis: Beyond Narnia, BBC’s Shadowlands) to oversee the production. Stone has directed several notable works based on the life of C.S. Lewis and thus fit into the production quite naturally. The crew even took advantage of the pandemic to shoot the film on location in the mostly empty halls of Oxford University where Lewis himself taught as an English tutor.

The final resulting film will be released in theaters for one night only on Wednesday, November 3rd.

Anyone who has seen The Most Reluctant Convert on stage will recognize much of what the film adaptation has to offer. The opening credits to the film version acknowledge that McLean’s script is an adaptation of Lewis’ autobiography Surprised by Joy (albeit with some inserts from other books like The Problem of Pain). The film version is very much an adaption of the same script that McLean has performed on stage dozens of times. It’s entirely (if not mostly) comprised of Lewis’ own delicately worded prose and McLean takes advantage of that verbosity and wit to give us a look at the early decades of the life of C.S. Lewis from his childhood until his conversion experience in 1931.

Much like many of the great stage-to-screen adaptations like Kenneth Branaugh’s Henry V and Jesus Christ Superstar, the film begins with an introduction acknowledging the artificiality of the production. The lead actor, Max McLean, walks from his makeup trailer to the set of the film and begins his monologue. This definitely helps lend some credulity to the production. The film is almost a pseudo-documentary but it’s comprised of a single 70-minute monologue given by the film’s star, Max McLean. The film intercuts some of the dialogue by handing them to actors that perform younger versions of Lewis, Tolkien, and Owen Barfield, along with others in individual scenes, but McLean himself appears as the narrator in every scene.

That’s not to say the film is particularly Brechtian or Avant-guard in its pursuits. This is just a good series of solutions for how to adapt a one-man-play as a film.

As someone who’s seen the stage play, the most interesting aspect of the film is how this rendition of the story relates to its prior version. They are very similar. The script is mostly the same, albeit there are a few altered lines of dialogue. What really changes in this adaptation is the tone. McLean plays up the staged version of the story to emphasize the comedic nature of Lewis’ writing, to highlight cute moments of irony and sarcasm. Stone’s film adaptation highlights the emotional weight of the story, drawing every ounce of emotion out of the script and even managing to pull off a couple of minor tear-jerker moments.

The biggest change to the stage play is a short epilogue; drawn directly from C.S. Lewis’ book The Weight of Glory, the film uses his famous “there are no ordinary people” speech to great effect as a kind of haunting addendum to emphasize the beauty of his complete intellectual journey. Then the camera pans one final time over the church and to C.S. Lewis’ actual grave to reassert the reality of these events. I find this addition to be very welcome. The stage play ends quite abruptly with the moment of Lewis’ conversion and it definitely benefits from the added moment of self-reflection.

The Most Reluctant Convert is something I deeply enjoyed watching. It’s a great stage play adapted from a great book and presented here lovingly and earnestly. I’m certainly biased in my affection towards McLean and his prior work, but I do think that he and Norman Stone have crafted the definitive version of his most popular stage play. I still love the way that McLean himself emphasizes different emotional beats than Stone does, but the work captures the quality of C.S. Lewis and showcases what makes him such an endearing and beloved writer. He was at once a brilliant writer, a brilliant satirist, and a deeply logical thinker. Much like its source material, it captures the life of intellectual challenges and knots that an intellectual Christian has to work through to finally reach the challenging point in their faith where they take the leap and trust God fully.

McLean and Stone do a wonderful job playfully stringing the thread of this complicated life story. While it’s clear the budget was very low, they take full advantage of the Oxford setting and managed to make something that feels lived in and grounded. McLean does excellent with his performance as C.S. Lewis and brings the joy and kindness of the man into the forefront (although I’ve always appreciated David Payne’s performance in An Evening with C.S. Lewis given how much he personally forwards Lewis’ Englishness and grumpiness). The Most Reluctant Convert isn’t a perfect or groundbreaking film but it is delightful and comes together in a way few Christian films do!

Norman Stone does an admirable job bringing Max McLean's one-man show to the big screen with his great locations and a witty script! Some of C.S. Lewis' best prose comes to life with this performance that captures the public figure's tumultuous three-decade conversion experience!