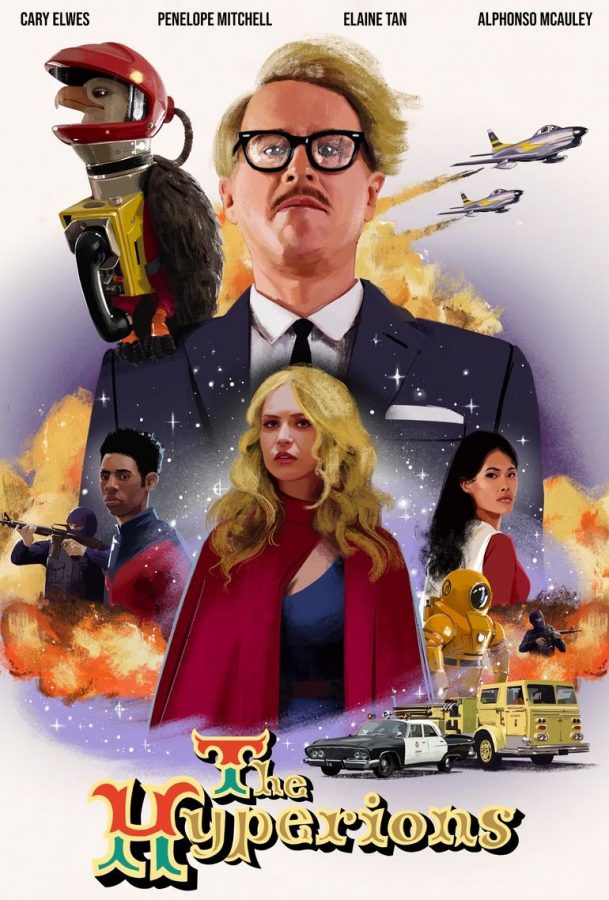 The Daily Wire’s gambit to make a dent in the culture war continues with their third film, The Hyperions. The film is a superhero comedy, but it wasn’t written and directed by Bonfire Legends—the studio behind the company’s in-house production. Instead, this film is produced by Saban Films; a boutique distribution company that previously released low-budget films such as Deadlock, American Sicario, Night of the Sicario, 3 From Hell, Jay and Silent Bob Reboot, The Assignment, USS Indianapolis, and Domino.

They’re known for producing late-career films with filmmakers like Bruce Willis, Walter Hill, Brian De Palma, Kevin Smith, Mel Gibson, and Nic Cage, but the most notable films that I’m aware they’ve produced are Fatman and Guns Akimbo. To my knowledge, Saban Films has no connections to Saban Entertainment—the western distributors of Power Rangers—although initially I assumed there might be some connection.

Violence/Scary Images: Some bloody images and gruesome offscreen deaths.
Language/Crude Humor: Some severe language including s***.
Sexual Content: None.
Drug/Alcohol Use: None.
Spiritual Content: None.
Other Negative Themes: None.
Positive Content: Themes of family, forgiveness, and love.

The Hyperions is a clear attempt for The Daily Wire to diversify their entertainment from their image thus far of grizzled right-wing female empowerment fantasies. Whereas Run Hide Fight, Shut In and Terror on the Prairie are stories about women defending themselves and their families from violence, The Hyperions is a superhero comedy. It’s a bright, over-saturated, and quirky indie-comedy shot and graded to look like a Wes Anderson movie.

There’s a lot of ambition that goes into a genre film with this much style and cinematic influence. It’s for that reason that I would consider The Hyperions the weakest film The Daily Wire has distributed thus far. Its massive ambitions call for a level of creativity and thematic clarity that the film doesn’t quite land.

The titular “Hyperions” refer to a comic book-style superhero family created by an eccentric supergenius named Dr. Ruckus Mandelbaum. The film is presented with a Walt Disney-esque atmosphere and presents him as an emotionally distant father figure to three adopted children. Even the title and music seem to be drawing heavily from classic Disney films. As is explained, Dr. Mandelbaum invented a special type of badge that allows for genetic manipulation, thus granting individuals superpowers if they are worn.

The story begins in media res with two of his adoptive children in the act of robbing a museum which they understand to be carrying several of the badges. They smash it up trying to obtain them only to realize that the only way to access them is for Mandelbaum to personally unlock them, thus facilitating a hostage crisis that lasts for the duration of the film. The film’s presentation is nominally about exploring how Mandelbaum’s children turned into robbers and unfolds as an exploration of neglectful family dynamics, abandonment, and hidden emotional motives.

Above all, this is the film’s greatest weakness. The film starts with a prologue that establishes Mandelbaum’s final meeting with his daughter, Vista, when she attempted to leave the family with her badge that allows her to psychically read other people’s minds. He takes the badge from her and doesn’t see her again for fifteen years. This structure should be enough to establish the basic stakes and dynamics between the characters but immediately we’re faced with the reality that Vista’s motivation can’t drive the story. There is no sense of betrayal or surprise to her actions because her dynamic hasn’t been established enough with Mandelbaum or the other Hyperions for us to understand how this works.

The outline of the story is there for this to be a solid family drama—ala The Incredibles—but the inelegance of the film’s exposition and reticence to thread drama and tension into their relationship keeps it from shaping into a fully realized narrative.

The film certainly doesn’t lack style though. The worldbuilding is mostly handled in animated transitions between the major scenes that help establish the rules of this universe and retroactively build up the characters. Some of the framing and cinematography are amazing, capturing a depth of field and use of saturated color appropriate for a Wes Anderson homage. This isn’t true during the hostage scenes, which switch to handheld shaky-cam in a bleach-white environment.

The film as a whole though doesn’t gel together. For a genre that’s usually focused on spectacle and action, this movie wants to fall back on intimate character drama. There’s nothing wrong with that conceptually. A quiet, intimate drama using the artifice of a superhero movie might actually be an interesting new way to explore the genre, given how played out it is. Unfortunately, it doesn’t set up these motivations from the start. If it wanted to have tension, most of the revelations of this film would’ve needed to happen in the opening ten minutes, playing out over the film as characters progress. A main character’s motivation generally shouldn’t be a story revelation.

Compare it to something like James Gunn’s Super, a superhero black comedy about its lead character grappling with depression from a breakup and processing his grief through brutal violence, escapism, and denial. The Hyperions tries to have a similar cathartic finale but the revelations aren’t tied to character decisions. The reveal of Vista’s actions isn’t caused by character motivation but by manipulation, and Mandelbaum’s responses don’t feel earned. The superhero setting doesn’t add anything to the film either, merely highlighting the film’s low-budget production design.

I feel like I’m being harsh on The Hyperions and maybe it’s just because I’m holding it to a very high standard. I’m not sure what they saw in the film that made them want to buy the distribution rights, but I’m not sure it will impress most audiences. If The Daily Wire wants to compete in the film market, it needs to focus on its strengths. There’s a reason a thriller like Jeremy Saulnier’s Blue Ruin can be made for $420,000 and look like a masterpiece but Deadpool is made for $80 million and looks like it was shot in a parking lot. High-concept genre filmmaking is some of the hardest filmmaking out there and it requires a lot of money. Their thrillers are better made and more interesting.

The Hyperions is a movie many fans of The Daily Wire are rooting for and one hopes that they enjoy it, but I'm not sure it will appeal to politically neutral moviegoers or superhero fans. It is in no way a political film but it is a film that needed more passes in the screenwriting stage.