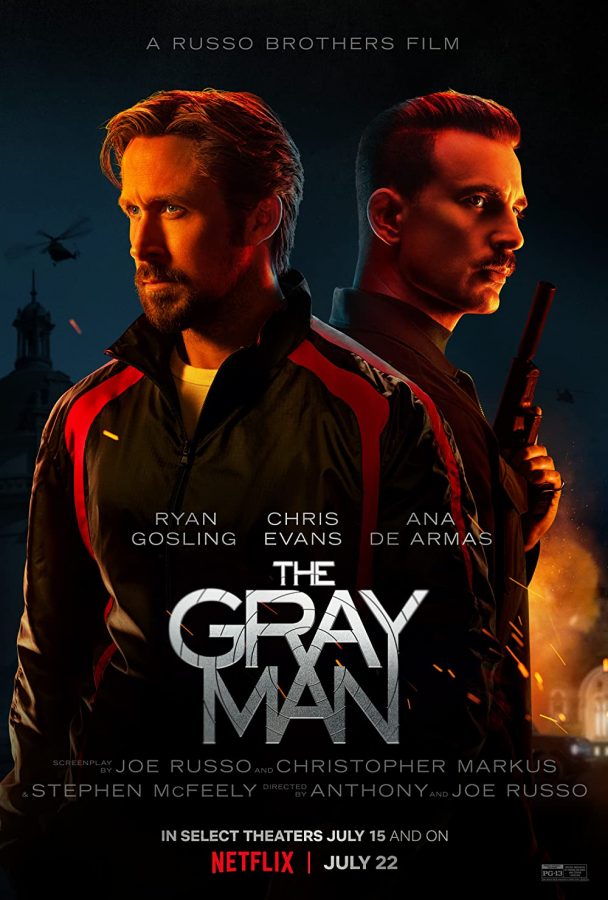 The Russo Brothers have built a strange career for themselves. The one-time co-creators of TV shows like Arrested Development and Community went on to direct four of the most popular and successful Marvel Cinematic Universe adaptations and became the most financially successful directors of all time. They’ve also thrown their money and prestige around to help support smaller film productions get off the ground like Everything Everywhere All at Once, Extraction, Assassination Nation, 21 Bridges, and Relic. They’ve also attempted to branch off into new creative directions away from the MCU, directing the AppleTV+ crime epic Cherry and Netflix’s new $200 million action blockbuster The Gray Man.

Violence/Scary Images: PG-13 action. One scene of a man having his finger nails violently removed off screen.
Language/Crude Humor: Frequent and severe language including d***, h***, a**, s***, b****, p*** and more, one incomplete use of m*****f*****.
Drug/Alcohol References: Brief casual drinking.
Sexual Content: None.
Spiritual Content: None.
Other Negative Content: None.
Positive Content: Themes of confronting and revealing corruption, stopping evil and cruelty.

It’s not fair to judge a movie by its fans, despite the best protestations of the upcoming Barbie movie and its army of terminally online incel fans. When it comes to reactions to films though, I find myself often needing to detach and ignore whatever the greater conversation is, especially when the critics and general audiences have inverse reactions. This happens a lot, and it’s happened again with the new Russo Brothers film The Gray Man, which is currently sitting on Rotten Tomatoes at a Critic Score of 48% and an Audience Score of 90%. Cue the people who believe critics are irrelevant and “real people” know what’s actually good…

Before I go on, I should say I used to be a huge fan of the Russo Brothers when they worked on Community and I was extremely happy when they were picked up as the directors of Captain America: Winter Soldier, as well as three subsequent Marvel team-up films. And they did very well with those movies, becoming the highest-grossing directors in history. My taste for them has decreased though, mostly because I’ve aged as a cinephile and started to realize their limitations. The Russo Brothers don’t have a clear creative voice. That’s been obvious to me since at least their first post-MCU film Cherry, a bland flavorless crime epic filled with tons of BIG SOCIAL COMMENTARY moments and tons of expensive camera setups and huge actors, but was itself a film that said nothing, felt like nothing, and accomplished nothing.

The Gray Man is a film very much in that realm. It represents a major attempt and career pivot for the directors of the highest-grossing film of all time to branch out in a new direction. It’s the most expensive film in the history of Netflix with a budget of over $200 million, eclipsing recent films like Red Notice, 6 Underground, and The Irishman for that title. It’s also proving somewhat popular, as its high audience score can attest. And I don’t blame audiences for that reaction, at all. The Gray Man is a very well-produced, filmed, acted, and scripted film. It’s slick, there are tons of shots that look SUPER expensive, the dialogue is quirky, Ryan Gosling is here as a cool guy and Chris Evans is hamming it up as a casually evil supervillain. There is a lot to recommend here.

The story follows the eponymous “Gray Men”, a secret CIA group comprised of hitmen assembled from former jailed criminals who volunteered to serve out their lives as Sierra agents. When one agent, Sierra Six, discovers he was ordered to kill a fellow agent named Sierra Four, he finds himself hunted by his own organization who has sent a brutal private contractor named Lloyd Hanson to kill him by any means necessary to cover up dark secrets.

The problem for me is just that the slickness covers up a lot of the middling nature of the film’s story. At times, I was prepared to chop the film up as a kind of Mission: Impossible/John Wick/The Bourne Identity ripoff; a gritty spy movie with an emphasis on gun fighting, colorful lighting, and tight hand-to-hand combat. Anyone who has seen those films though can attest that The Gray Man isn’t nearly as tightly wound as those three movies. For all of its slickness, there’s no panache in how the film is assembled. It’s presented plainly, often somewhat disinterestedly.

Readers may recall I gave Avengers: Endgame and Infinity War scores of 7.3/10 because I found them thematically confused and convoluted. My reaction to The Gray Man is very much the same, although those films felt more coherent and emotionally driven than their newest effort. This new film feels sloppy. All of the ideas in the film are fine (if pulled from a pedestrian off-the-shelf dime-a-dozen espionage novel and recycled from previous spy films). The film though lacks a deep sense of drive and urgency. It’s a long film and it’s mostly entertaining to watch at the moment but lacks a lot of its energy and grows tedious at times.

What is the point of a film about questioning allegiances and fighting against the grain to do what’s right when the movie itself barely cares about those concepts or explains why our character ought to care about them?

The Gray Man is functionally harmless of course, and there is nothing overtly egregious about it, which likely explains the high Rotten Tomatoes score. Everything in the film superficially works. I almost find that more frustrating though because it doesn’t leave enough of a mark. It lacks the constant propulsion of Mad Max: Fury Road or The Raid. It lacks the grandiose beauty of Casino Royale or Skyfall. It lacks the breakneck clarity of John Wick. It lacks the tightly wound dramatic tension of the recent Mission: Impossible films. It just comes off as cold to me, like the cinematic equivalent of a Ritz Cracker. It doesn’t need to reinvent the wheel, it just needs flavor or purpose.

It’s clear from a distance the Russo Brothers are hoping to turn Sierra Six into their own James Bond, a reliable spy franchise they can return to in absence of a major franchise like The Avengers. Between this and Cherry, it’s clear to me that they want to strike out on their own and show they have more to offer than just MCU Films, which is clear given they apparently turned down the directing chairs for the upcoming Avengers: Kang Dynasty and Avengers: Secret Wars films coming out in 2025. And they’ve certainly succeeded at showing they can make a slick, pleasing movie that people will generally enjoy. As I’m watching their career trajectory though, I can’t help but lament they don’t have more vision for their work. They’re quite content and generally competent in adapting other people’s books and properties in as large and expensive a way as possible, but I can’t see what it is that makes them tick other than vague allusions to better films and a liking for smooth jazz soundtracks.

The Gray Man is a slick and visually engaging summer blockbuster being released conveniently on Netflix, but it lacks the tension or style of recent action flicks and feels somewhat tedious in comparison.