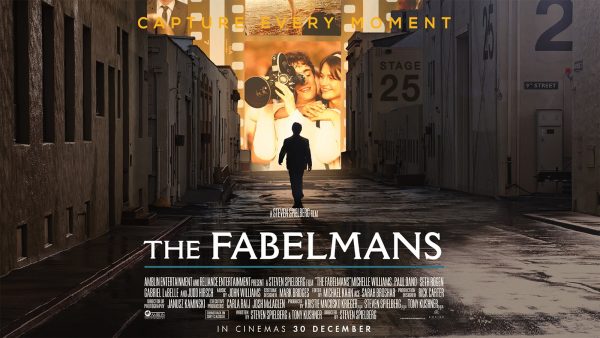 Steven Spielberg is one of the greatest directors who ever lived. Since his debut with Duel (1971), he has directed thirty-two films and many of them are masterpieces of storytelling, like Schindler’s List and The Color Purple. He is also one of the greatest blockbuster directors of all time, but following his adaptation of Ready Player One he’s mostly moved away from action movies. The fifth Indiana Jones film was handed over to director James Mangold, with the fourth entry considered one of Spielberg’s weakest films.

Spielberg has either grown bored or lost his touch directing action films, as the movies that he is still inspired to make are attaining critical acclaim but are unappreciated by audiences.

Violence/Scary Images: Scenes of bullying, punching, slapping, and old film action.
Language/Crude Humor: PG-13 levels of language, including some anti-Semitic speech and crude sexual references.
Sexual Content: A bizarre scene involves a Catholic girl declaring Jesus “sexy” and kissing the main character because she’s attracted to him because he is also Jewish; nothing is depicted but kissing. The plot also involves themes of adultery and divorce.
Drug/Alcohol Use: Limited to none.
Spiritual Content: The film follows a family of religiously practicing Jewish people, most of their neighbors and friends are presented as Christian or anti-Semitic, either rudely praying to cure the family’s Judaism or brutally bullying them.
Other Negative Themes: Some uncomfortable and bizarre scenes.
Positive Content: Themes of family, healing, and filmmaking.

Steven Spielberg doesn’t need to be defended after five decades of being one of the greatest living filmmakers, but lately, it seems like the public needs to be reminded that he is still a great director. His movies have consistently tanked over the past decade as the one-time director of popular blockbusters like Jaws, E.T. The Extra-Terrestrial, Indiana Jones, Jurassic Park, and Saving Private Ryan shifts into the phase of his career when he merely focuses on personal projects like Bridge of Spies and the remake of West Side Story, the latter of which bombed last year and only earned back $76 million of its $100 million budget.

Spielberg’s newest film is doing even worse, having grossed $7.8 million on a smaller $40 million budget. His market share seems to decrease with every new film, and yet he is still Steven Spielberg and is already in pre-production producing a sequel of Steven McQueen’s Bullit for Netflix. The 75-year-old director cannot be stopped.

The Fabelmans isn’t one of his strongest recent films though. Despite a script by frequent collaborator Tony Kushner, composer John Williams, and cinematographer Roger Deakins on hand, this new film mostly edges out toward the lower tier of the director’s recent filmography. That said, it is still one of the best films of 2022, a lovingly crafted semi-autobiographical story about the life of a young Jewish boy growing up in the 1950s who finds refuge from the world in movies.

Anyone with a passing familiarity with Steven Spielberg knows that family abandonment is a theme that he has repeatedly returned to throughout his filmography. Close Encounters of the Third Kind, E.T. The Extra-Terrestrial, and A.I. Artificial Intelligence all explore stories of characters struggling with estrangement from their loved ones who have disappeared for some nebulous reason. These stories all came from a deep place for Spielberg, as his own parent’s divorce was a formative and traumatic experience in his young life.

Trauma ends up being one of The Fabelmans central themes. In the opening scene, a young boy named Sammy Fabelman is disturbed by the depiction of a train wreck scene in the movie The Greatest Show on Earth (1952). Trying to get a grasp on what happened, he tries to recreate the scene with his model train set and a video camera and discovers that film is a way he can gain control of his emotions through the process. Over his adolescence, Sammy becomes a proficient amateur filmmaker and makes large movies for his friends and family, who dismiss his talent as a mere hobby.

As this is happening, Sammy Fabelman struggles with family problems, isolation, and relationships as his dad constantly moves the family for his computing job, his mother begins having an affair, and his fellow students bully him for being Jewish. It is always clear that the events we see are a near representation of Steven Spielberg’s actual life and childhood, with several major events even being recreations of moments in his own life. There’s weight in seeing how the childish Sammy reflects the adult Steven’s own battle with abandonment and isolation.

For the most part, The Fabelmans is a very laid-back work. It is a coming-of-age story and it doesn’t have very many big moments of splash or melodrama. Even the more eccentric actors in the film like Seth Rogan are playing very muted characters. The story as it is isn’t episodic, but it strings along its theme slowly and unfurls revelations as we see how the actions of our characters slowly unwind and break apart the family over time.

The result is a film that threatens to indulge in some of the most grotesque ego-driven autobiographical cinema ever produced but doesn’t. Instead it comes across as dignified, self-assured, and modest, even though it explicitly isn’t. It helps that Spielberg has dozens of the most talented filmmakers in Hollywood working alongside him to make something like this look easy, but this is still very challenging filmmaking. Despite this, it is easy to want more from the film given that Spielberg has delivered a dozen dramatic masterpieces greater than this in the past. Even so, the dozen or so scenes where the film does hit its stride make it great!

The Fabelmans isn't a cinematic miracle like some of Spielberg's other recent work, but it is a very solid piece of emotional storytelling that is worth seeking out!