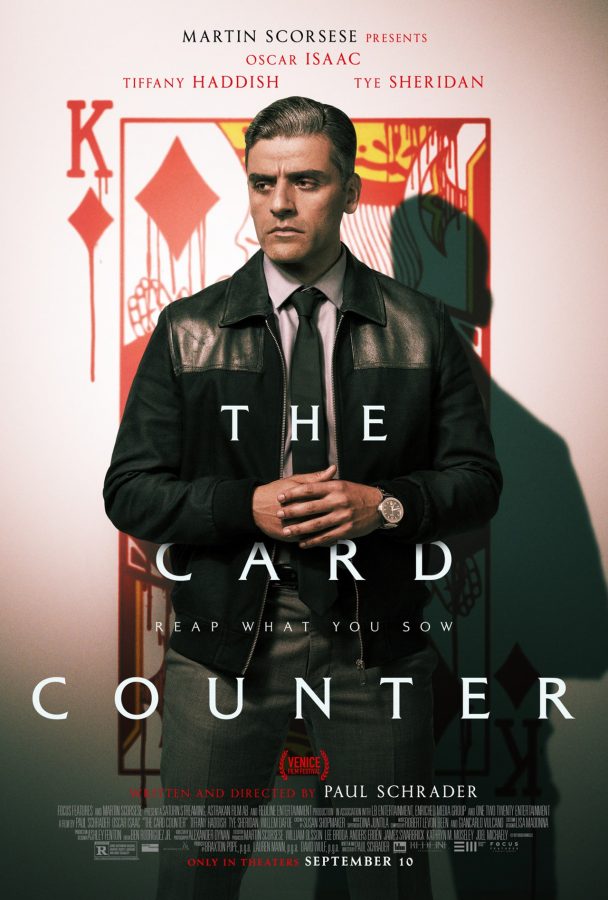 Paul Schrader came back into the spotlight of mainstream Hollywood in a huge way back in 2018 with his career masterpiece First Reformed. His dark spiritual thriller, inspired by the works of classic filmmakers like Robert Bresson, proved to be one of the most powerful mediations on faith, damnation, and self-loathing in recent cinema. Now he’s back again with his newest film, The Card Counter. This gambling-themed drama was conceived as something of a reunion film for Schrader and his old creative partner Martin Scorsese. Since it was announced though, Scorsese’s role in the film has seemingly been radically reduced (likely by COVID or creative differences) and Schrader’s influence was given more presence.

Paul Schrader is probably one of the best screenwriters alive. I say “probably” because his work is deeply inconsistent. Few writers are more passionate, angry, and spiritually fascinating as he is, but few directors create filmographies that vacillate so violently in quality. This is the man who wrote the screenplays for Taxi Driver, Raging Bull, and The Last Temptation of Christ. He’s also the director of masterpieces like Mishima: A Life in Four Chapters and First Reformed. He’s also directed movies as awful as Dog Eat Dog.

It’s for that reason that I was very interested in seeing his newest film, The Card Counter. It’s arriving in the immediate aftermath of his career masterpiece, First Reformed, which completely shocked everyone who has ever seen a Paul Schrader movie by somehow pulling off his most complete, dark and spiritually fascinating work of filmmaking. It was a story driven by his usual brand of Calvinist self-loathing, progressive anxieties, and cinephilia that manages to explore deep and troubling questions about death, salvation and environmentalism in a way that felt subtle and powerful.

It’s a shame then The Card Counter must immediately live in its shadow. That film would always be a tough act to follow but here I’m not sure what Schrader is trying to do. At its surface, his newest film appears to be something of an attempt to reverse engineer the kind of character-driven crime thrillers that Schrader used to produce with Martin Scorsese in the 1970s and 1980s. It even has Scorsese attached as an executive producer. Even so, this definitely feels like a step back for Schrader.

The film stars Oscar Isaac as “Will Tell”, a pun name that’s also a fake identity for its central character. As we meet him in the film’s prologue, he’s a highly intelligent and emotionally reserved man living out the remainder of his prison sentence that we don’t fully come to understand until much later in the film. Following that stint, he’s become a professional card counter. He tours the country cheating casinos out of small amounts of money so that he can survive day-to-day and live somewhat anonymously.

That lifestyle is interrupted by the appearance of two people in his life: La Linda (Tiffany Haddish) and Cirk (Tye Sheridan). Linda immediately recognizes Will’s talent as a professional gambler and offers to sponsor him for a professional poker tournament that could make them immensely wealthy just as Cirk starts appearing in his life. We quickly find out Cirk has connections to someone from Will’s past. The young man reminds Will of his younger self, and is therefore someone who is desperately in need of direction and help in his life. They start going from town to town playing professional poker games as Will’s dark past starts to slowly reveal itself.

If you’ve seen one Schrader film, you can imagine what the duration of the film will involve. You get long internal monologues about the nature of damnation and guilt, course dialogue from deeply flawed characters, and eccentric acting decisions that go a long way to expressing the character’s inner emotional state (namely with some of Isaac’s character ticks). Much of the film is deeply striking and a handful of the moments are even gripping. The frustrating part is just that the film is deeply uneven. The performances are rough, the cinematography feels cheap in places and even the ADR recording is obviously rushed.

What does work in the film comes directly from Oscar Isaac’s intense performance as Will Tell. The film’s entire structure depends on the slow drip of reveals and revelations about the pasts of everyone involved. It’s trying to be a moral tightrope of characters dangling between salvation and damnation and he sells that moral dynamic more than the script does. For as melodramatic and excessive as the film gets at points, he plays the role so straight-faced and committed that you actually believe this character is his true self.

That shouldn’t be surprising though. Oscar Isaac has ALWAYS been one of Hollywood’s most committed actors. You see that in his work in films like Inside Llewyn Davis, A Most Violent Year, and Ex Machina. He managed to take the initially superfluous role of Poe Dameron in The Force Awakens (he was supposed to die in the original version in Act 1) and convinced Disney to make him one of the main characters in the Star Wars sequel trilogy through his sheer talent. Without Oscar Isaac, The Card Counter wouldn’t be half the film it is.

Those elements of the film that do work are a testament to the energy and drive that went into making this film. There’s a powerful morality that plays deep in this film about the nature of guilt, sin, and evil and how those things carry into our lives for years. Unfortunately, The Card Counter is a great performance movie in search of a better film.

The Card Counter is a very interesting film coming from one of Hollywood's most important directors but it can't help but feel like a minor failure in some regard. It's trying to be a much deeper film than it is and mostly holds together via sheer charisma.