Review – Terror on the Prairie 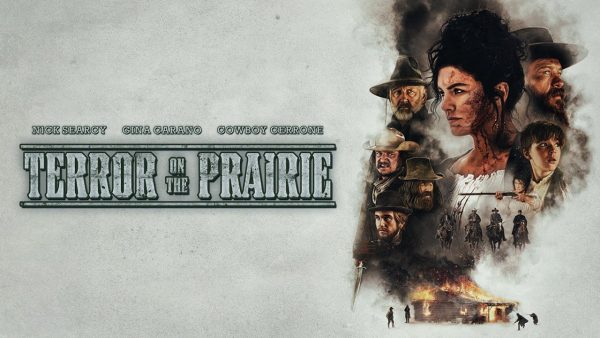 The Daily Wire teamed up with Bonfire Legends, the former owners of the now-defunct film studio Cinestate, in early 2021 to start an experiment in alternative media distribution. They committed to producing films and distributing them through a subscription service app, charging $15/month or an annual fee of $144 (with a free tumbler). So far, they’ve distributed three feature films and a handful of documentaries, including Run Hide Fight, Shut In, The Hyperions, and What is a Woman? They’ve also committed to producing $100 million worth of children’s content, bringing in former Babylon Bee animator Ethan Nicole to produce a show called Chilla Time and other animated content.

Their biggest and most newsworthy acquisition though was hiring former Disney star Gina Carano, who was fired from The Mandalorian last year following a concentrated “#FireGinaCarano” campaign on Twitter after a series of social media posts mocking transgenderism, vaccine efficacy, election fraud, and comparing the plight of Republicans to Jews during the holocaust, which she has since apologized for.

Terror on the Prairie represents her first project since the firing and is the Daily Wire’s attempt to rehabilitate and “UnCancel” a relatively major celebrity. Carano also has a second Daily Wire film slated for this year called White Knuckle.

Violence/Scary Images: Intense moments of violence; a man is scalped on screen, characters are repeatedly shot and stabbed, and several animals are shot and killed. A woman dresses a bloody wound. An attempted rape is depicted.
Language/Crude Humor: Some language.
Sexual Content: Rape is a major plot point late in the movie, and an implicit threat for the duration. A female prostitute attempts to sleep with a man.
Drug/Alcohol Use: Characters drink casually.
Spiritual Content: Most of the characters are implicitly Christian and frequently pray and quote the Bible.
Other Negative Themes: Lots of casual violence and killing.
Positive Content: Themes of family, self defense, loyalty, and the struggle to do the right thing.

Much ink has been spilled in the lead-up to Daily Wire’s new western film, which premiered exclusively on its streaming app this Tuesday. The film is the first starring role for actress Gina Carano following her being fired from Disney+, and it isn’t shy about the fact this act of filmmaking is openly partisan. Terror on the Prairie is openly advertised as her comeback feature, with the film’s description saying, “Disney canceled her. Now, the uncanceling begins. Gina Makes her return in this gritty new western and original feature by Daily Wire.” It is hard to ignore the film is overtly being sold as a political football, a reality seemingly reflected by the fact that the only major reviews for the film thus far have been from right-leaning publications like Hollywood in Toto, Geeks and Gamers, and Bounding into Comics.

Terror on the Prairie is set on the Montana plains in the decade after the American Civil War. Two middle-aged ranchers, Hattie and Jeb McAllister, are struggling to keep the farm afloat thanks in part to Jeb’s gambling and stubbornness. As we come to discover, he’s a former Civil War veteran from Missouri who turned from the Confederacy to the Union at a decisive moment in the war. While he’s away one day in town, four vagrants with mysterious intentions approach the ranch asking for food and assistance, and Hattie discovers their horses are lined with human scalps. Realizing they’re murderers, she is forced to barricade herself and two children inside her cabin with a shotgun until help arrives.

The film is very much in line with the stories the former producers of Cinestate have thus far produced with Daily Wire. Run Hide Fight and Shut In are both grindhouse thrillers about women who are trapped in violent situations and must fight their way out from male violence using their wits and protecting their loved ones in the process. Female-oriented revenge thrillers seem to be their forte. It’s thus far proved a functional, if repetitive, format for the fledgling company to rely upon, creating films that are both overtly sentimental, morally binary, and heavy-handed in their political subtext — often to their detriment but well suited to its conservative audience.

What sets Terror on the Prairie apart is its performances from Gina Carano and Nick Searcy. Carano has a limited range as an actress, a trait she shares with other MMA stars turned actors and actresses, but she’s very good when cast in the right part. The Mandalorian used her to great effect, creating a character that was overtly aggressive and lively but grappling with deeply buried wounds. Carano’s character here doesn’t have that benefit, as she’s playing a much more subdued and normal character. The film mostly relies on Carano’s stature and strength to emphasize just how hard-bitten and cruel life in the west could be when the battle of civilization and chaos rolled up to an average person’s front door. Again though, Carano is an MMA fighter so at times she exudes the same overbearing muscular features that Ben Affleck did in Live by Night, being a massive physically imposing figure in a story that called for more vulnerability.

Searcy ends up carrying a lot of the film as its villain, a brooding and angry preacher’s son roaming the mountains seeking vengeance for past transgressions, quoting self-satisfied Bible verses about vengeance and justice as he brutally murders those he despises — a contradiction the film loves indulging. While his full intentions don’t become clear till late in the film, he does a good job driving the film’s conflict almost single-handedly. At first, the implication of his arrival has a dark sexual subtext, carrying the fear of a woman alone in a room full of four violent men and all the baggage that implies. Quietly though, the film slowly reveals his more personal motivations for seeking out the McAllister homestead.

Even for a film with a limited budget, the Terror on the Prairie looks very good and benefits from beautiful natural backdrops and nicely furnished production design. The film was shot on location in Montana, and anyone who has driven through the American heartland can tell you that the countryside has some of the most breathtaking vistas and scenery anywhere in the world. It’s a beautiful, unforgiving landscape that serves the same purpose to the mise en scene as it does in every western, becoming a battle for the souls of men and for civilization itself.

Terror on the Prairie mostly ends up being a retread of western settings and themes, although that’s not a terrible thing. There have been thousands of western films and most of them repeat the same handful of plots and themes. The way to judge a good western from a lukewarm or bad western is how well it interrogates its setting, using it as a vehicle for some understanding of the struggle of identity, civilization, and humanity in a world where justice is meted out at the end of a gun. In that regard, the movie is passable, as it charts out a story of personal struggle and inner fortitude in the face of one’s past coming to haunt them.

The result is that Gina Carano’s comeback film is pretty good but doesn’t quite hit a deep stride. It’s a beautifully shot movie, filled with good performances and moments of sporadic intensity, but it never hits the pure catharsis and brooding terror it wants to hit. Most audiences I’ve read seem to find the film tense and brutal, but it’s relatively tame compared to previous films from these producers. The script, direction, and performances don’t elevate the story in the way producer Dallas Sonnier’s previous collaborations with S. Craig Zahler elevated Bone Tomahawk and Dragged Across Concrete into seething masterpieces.

Given that Terror on the Prairie is meant to represent the Daily Wire’s biggest foot forward into alternative media filmmaking, one wishes it could deliver a harder punch. If this is meant to be the proof of concept, that proves major stars can move forward without the benefit of mainstream Hollywood financial support and social media approval, it succeeds but only just. If this film punched in the weight class of a film like Bone Tomahawk, it would become the biggest cult hit of 2022. Sadly, it doesn’t hit that high watermark.

Terror on the Prairie is a solid western, even though it needed to be a standout work of filmmaking. Carano does very well leading a film with heavy expectations!