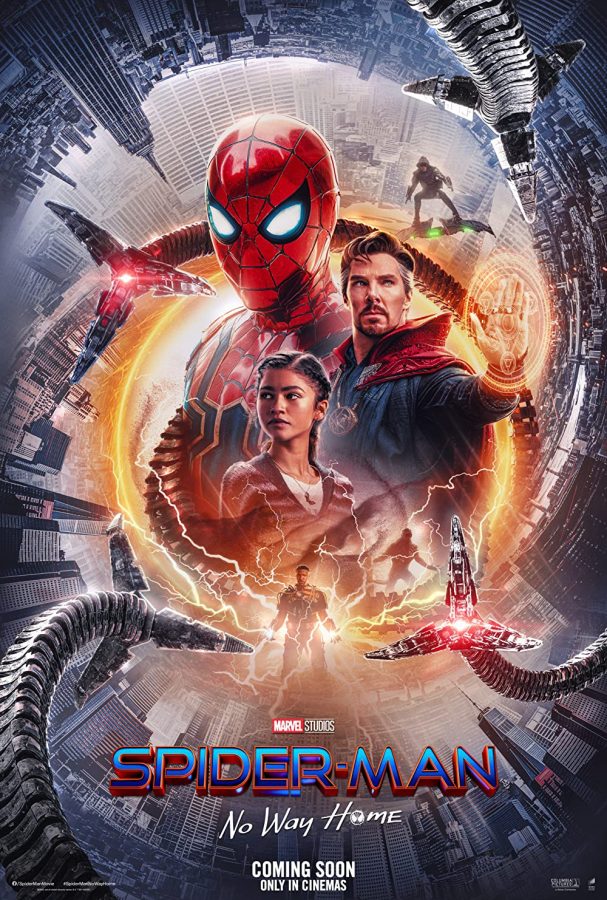 To be frank, I wasn’t a big fan of Spider-Man: Homecoming. Thanks to a few rewatches and the sequel, it grew on me over time. Upon the ending of Far From Home, I found myself eagerly awaiting the third entry to the series alongside the rest of the fanbase. After much speculation on the title, we learned earlier this year the third movie in the trilogy would be Spider-Man: No Way Home. Then the rumors, potential leaks, and theories came pouring in. Thankfully, the film is out now, and all of that can now end. Of course, how things play out paves the way for even more of that. The big question is—does it deliver on everything we asked for? I won’t reveal any of that here. Whether you already THWIP’d over to your local theater or want to know what that PG-13 rating is all about, this is a SPOILER-FREE review from your friendly neighborhood geek under grace.

Violence/Scary Images: Multiple fight scenes occur in the film. Characters frequently punch one another. Bladed weapons come into play via a particular character who uses one to stab another character. One of the main threats has the power of electricity, and they use that power to blast others and send shocking volts through their bodies. A character gets hit by a vehicle. We see one death on-screen, in which blood is seen on the character’s face. That moment leads a character to search for a wound that leaves blood on their fingers. Then, a group of policemen fires their guns at a character who manages to escape.

Language/Crude Humor: Frequent uses of “s**t”, “a**”, and other swear words such as h*ll and d*mn. One use of “GD” and another in which “God” is used as an expletive. A mug has a picture of a fox and text on it, implying “for fox sake.”

Drug/Alcohol References: One character sits intoxicated at a bar.

Sexual Content: Two characters kiss on screen multiple times. Peter is seen in his underwear with his costume at his ankles. One very short conversation has a character ask if they practice safe sex. An onlooker asks if MJ will have Peter’s “spider babies.” During the introduction of a character, they are naked, and only seen from the waist up.

Other Negative Content: This movie is easily the darkest and bleakest in tone compared to the other two films.

Positive Content: The message in this movie is about redemption—the idea that everyone deserves a second chance. The attitude that Peter holds towards these villains is very Christ-like.

In Spider-Man: No Way Home, the story picks up exactly where Far From Home left off. The world now knows that Peter Parker is Spider-Man. We see how Peter, his friends, and those close to him handle this situation. I came away impressed with how well the movie made use of its runtime. The film has three phases—Peter’s exposed identity, the villains’ arrival, and the solution. No scene ever felt too long or drawn out. Sony and Marvel did not waste a second of the 2-hour and 28-minute runtime in the slightest. Viewers may laugh in one minute, could shed a tear in the next, and be on the edge of their seat in another. Its balance of tone is also a feat to admire.

Reports of Tom Holland and others involved in the film told us to expect a much more serious tone, but that wasn’t the case for the entire movie. Though it starts on a stressful note, some moments lightened the mood. For example, one of the negative traits that held the first two movies back for me was Peter’s time in school and his fellow students. Peter doesn’t spend nearly as much time at his High School in this film, but it serves as a setting for some fun comedy. Flash Thompson was easily the worst of the students but much less so this time around. Though they likely wrote the character for that purpose, it was nice to see him better utilized as comic relief. We learn how both the students and the school’s staff are reacting to the news.

We see two sides to the argument over how people feel about Spider-Man. Sadly, much of the film’s first part feels too close to home—pun not intended. The events occur due to Mysterio’s actions at the end of Far From Home. While this aspect of No Way Home stays true to what makes a classic Spidey story, it feels too relevant to some of the issues and political debates that the U.S. and the rest of the world are dealing with at this current time. I was very grateful for the comic relief early on for that reason. Thankfully, we get to move on to more significant problems. The time spent on the repercussions of the previous film is necessary to get Tom Holland’s Peter to the point in time that every Spider-Man goes through.

In the trailer, we know that Doctor Strange attempts to help Peter by casting a spell that would make people forget he is Spider-Man. After the process is interrupted, it does the opposite and attracts the entire multiverse towards that identity—that is where the villains come in. All of the work you dedicated fans who went through every poster and trailer with a fine-tooth comb pays in dividends. The writing and dialogue meticulously explains everything and it pleases me to say that very few stones were left unturned, which had to have been a monumental task, especially since word got out that parts of the film were being re-written on set.

Another aspect of No Way Home I must applaud is that it successfully blurs the line of hero, villain, ally, and enemy. The movie at first has us questioning Peter’s motives and whether he is being selfish or not. After all, as we see in the trailer, it’s his fault things are a mess after the spell misfires. Then, we see the villains straddle that line as well. Unfortunately, there seems to be a disconnect when Peter makes a decision which goes against Doctor Strange’s advice, and I found myself siding with Strange on this topic. The lead up to Peter making that controversial decision feels too sudden before we learn what kind of plan he has in mind.

It was an absolute treat to see the older actors on screen again, such as Alfred Molina and Willem Dafoe. It was also good to have a better time with Jamie Foxx as Electro, though the reasoning for him no longer being an honorary member of the Blue Man Group wasn’t much of one at all. Based on the trailer footage, I knew this would be the case, but I was a bit bummed that The Lizard and Sandman got relegated to their CGI counterparts. I selfishly wanted more of Thomas Haden Church, who I feel is the saving grace of Spider-Man 3. Although, I was happy that he gets to do more than be a giant sand cloud. The writing didn’t verbalize it, but I believe Peter’s encounter with Flint Marko is what helped shaped his decision making process.

The focus in all the marketing for this movie was mainly on Doctor Octavious and Green Goblin to a lesser extent. So, I had expected much less time with the other three villains than what we got—every one of them had their moment in the spotlight. It feels absurdly weird to say that these guys are all a part of the supporting cast, though we know it doesn’t remain that way. The writers brought these characters from the previous Sony films and went above and beyond, even with the weaker ones. Before my viewing, I assumed I would be having nostalgia shoved down my throat alongside the popcorn, but what I got feels more like an honest homage.

In tackling the fate of these villains, No Way Home aims to correct what was an ongoing flaw across each series of movies—each of them killed in battle against Spider-Man. In that process, the Amazing Spider-Man films take some comedic jabs while Spider-Man 3 takes its licks; Sony being willing to include such moments adds a layer of self-deprecation that is hugely meta. In the same breath, both celebrated as well. No Way Home sets out to put the past in the rearview mirror and does so respectively. This movie successfully takes all of the good and bad in every film and makes me appreciate them even more than I did before watching it.

In conclusion, Spider-Man: No Way Home is a movie you should not miss though it isn’t without flaws. My experience seeing this movie in the theater is one I will remember for a very long time. Many fans have specific expectations going into this film; whether it meets those is for you to discover. The Sony producer alongside Kevin Feige, Amy Pascal, has said more movies are coming in the future. That seems accurate, but whether they will be in the Marvel Cinematic Universe is not a question that got answered. Either way, I can assure you that fans will be satisfied and that I look forward to the future of the series.