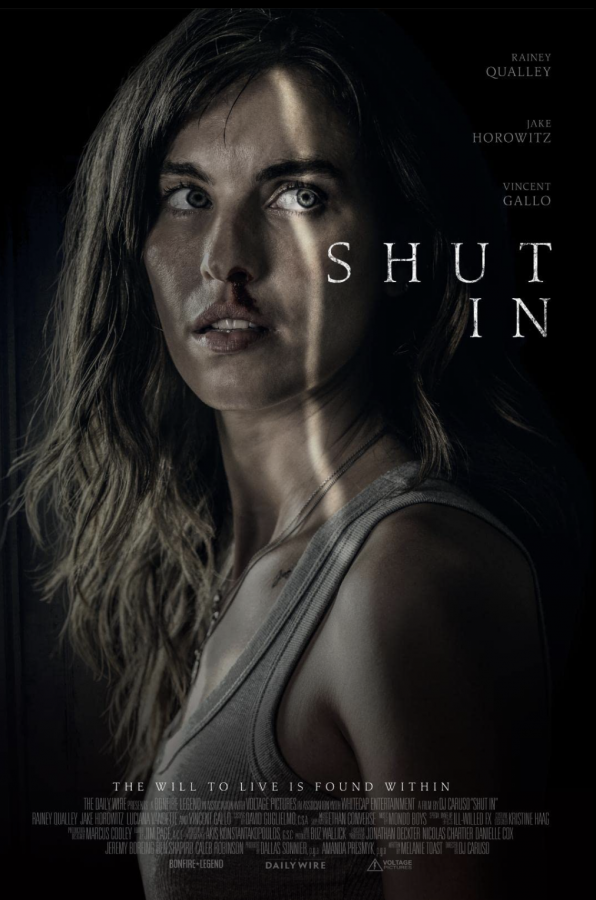 The Daily Wire has made a major effort in the past two years to try and break into filmmaking as part of its effort to turn the tide of the culture war. In order to do that, it’s brought on the former producers from Cinestate to form a small independent studio capable of producing slick, shocking, and attention-grabbing action films and thrillers.

Their lineup of films includes last year’s Run Hide Fight, Shut In, Terror on the Prairie, and an upcoming unnamed film directed by exiled Mandalorian actress Gina Carano. The second of these is scheduled to premiere this coming Thursday live on YouTube before being exclusively released on the Daily Wire’s streaming service.

Violence/Scary Images: Some intense images; several scenes of nails being driven through hands with draining blood and cries of agony, a man is set on fire, characters are shot offscreen.
Language/Crude Humor: Severe language throughout including f*** and s***.
Sexual Content: Nothing depicted, although one character is repeatedly described as a pedophile.
Drug/Alcohol Use: Meth addiction is a theme in the story and a major plot point.
Spiritual Content: Themes of redemption, rebirth, and overcoming temptation.
Other Negative Themes: Very dark themes and story that isn’t appropriate for children.
Positive Content: Themes of Christian redemption and family.

Disclaimer: This reviewer has written two film reviews that have been published at the Daily Wire in the past but has no professional connections to the distributor or the producers of this film.

Shut In has a premise that should by all rights be lurid and exploitative in the hands of a cheap director. Three methheads get into a fight in a rotting farmhouse that results in one of them being forcibly locked in a pantry while her children are alone in the house with a roaming drug-addicted pedophile. By all rights, this should feel lurid, disgusting, and a reprehensible dive into human depravity, but the film actually does manage to make a modest production out of the preceding premise.

Shut In is part of Daily Wire’s ongoing attempt to break into the movie industry. Produced by the folks behind films like Bone Tomahawk and Dragged Across Concrete, Shut In is the second of four announced films to be distributed by the politically conservative media company as part of an attempt to create an independent film studio.

Shut In definitely bears the marks of a film produced by the Daily Wire. For one, the title “produced by Daily Wire” appears at least three times during the opening and credits. I suspect if anything that’s going to be the biggest barrier to entry for this film, if only because that’s immediately going to turn off non-conservatives from seeing the movie, especially if they’re afraid the name brand reflects the movie’s politics.

Frankly, it doesn’t. Shut In’s worst sin is a somewhat saccharine ending and a predilection for cheap sentimentality. Beyond that though, this is a grindhouse movie on par with the likes of Standoff at Sparrow Creek, VFW, and Run Hide Fight. It’s violent, unrelenting, and populated by foul-mouthed destructive characters. There’s no obvious pontificating about political issues in the story (beyond the general presence of overtly pro-Trump actors and producers).

The most immediate cinematic comparison that comes to mind is 2016’s brutal Green Room, about a punk band who gets locked in the back of a Neo-Nazi bar after witnessing a murder. That should be an indication that we’re not dealing with a Pureflix propaganda film.

As I said, the film is your classic single-room thriller. A young mother of two named Jessica gets trapped in her pantry and she has to figure out a way out of the house so she can protect her two children who are locked in their bedroom upstairs, momentarily safe but cold and hungry.

Jessica’s story ultimately turns out to be a story about overcoming the past and becoming a new person. She and her ex-husband are revealed to be former drug addicts, and the reality and temptation of it hang over the film as her husband and his friend (played by Vincent Gallo) barge back into her life hoping to drag her back into their world.

The symbolism is not subtle in this regard either. There’s a lot of overt Christian symbolism in the story, best optimized by the reveal of a Bible and a crucifix that Jessica has hidden in her pantry since the death of her mother. The image of hands being punctured by nails is a frequent one throughout the film and draws clear allusions for which character is meant to be the sacrificial Christ-figure in this story. The plot ends up involving these symbols and serves as a clever metaphor for the wisdom and guidance of her mother that she’s bottled up and ignored, never once consulting.

Shut In is a modest production but it’s also a very well done film. Its script is sharp and it never fully succumbs to the dark lurid version of itself it could’ve become in less empathetic hands. It might’ve benefited from a less over-the-top happy ending but the emotional intent of that scene is there for a reason even if it feels a bit off for me. It certainly makes sense for a story about overcoming drug addiction to have a light at the end of the tunnel.

Shut In is a modest but well-made movie that's a solid stepping stone for The Daily Wire as it continues to try and build up its brand as an independent film distributor.