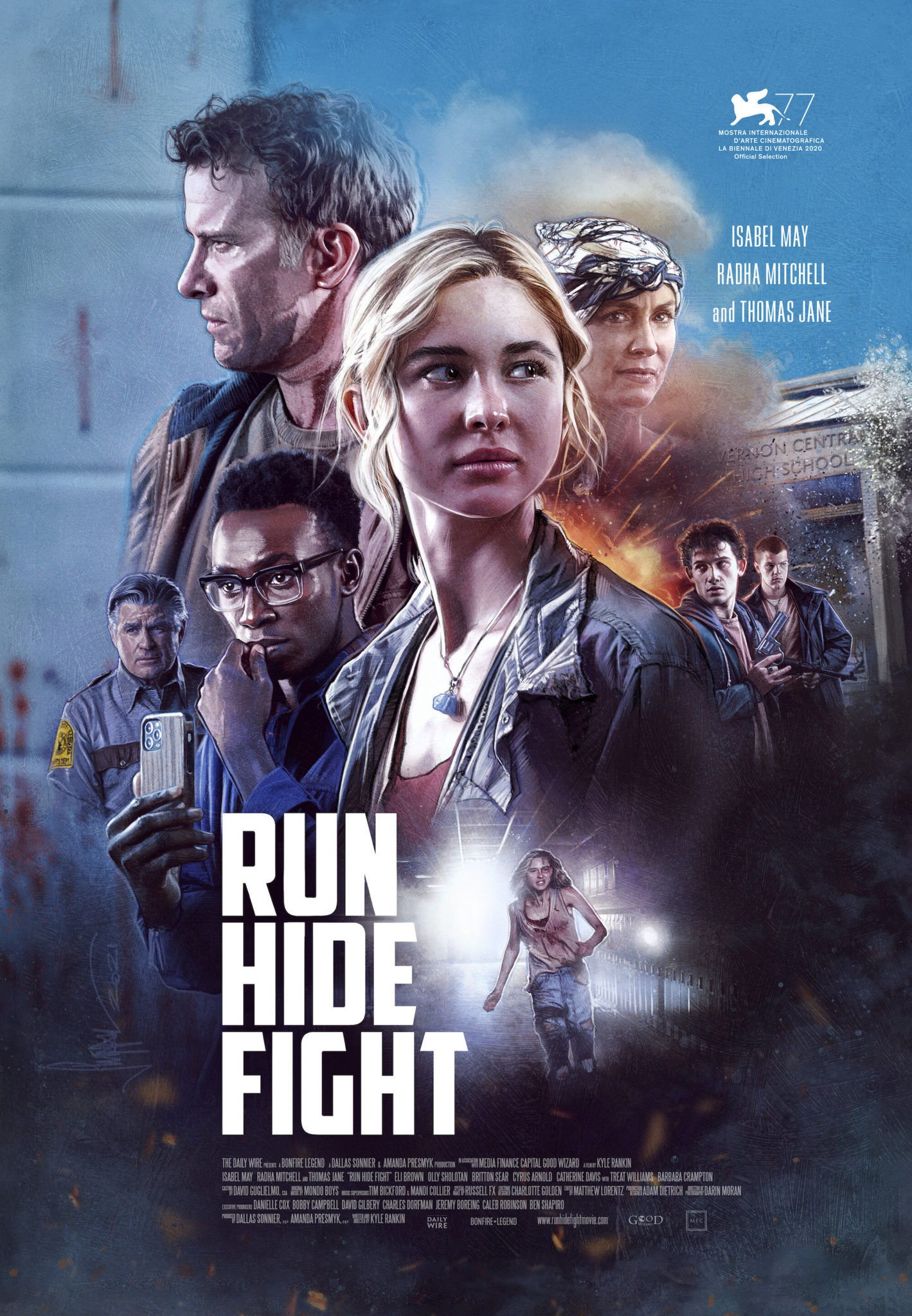 Run Hide Fight was regularly marketed by The Daily Wire as the publisher’s first venture into the mainstream culture with a feature length film.  Can’t tell if that’s a threat or a promise.  Either way, it’s certainly a bold move.  Responses to it were as polarized one could probably assume, with critics raking it across the coals and audiences treating as something hardly distinguishable from the Second Coming.

While I have come to fully recognize myself as the member of an endangered species known as the “black conservative”, I prefer not to let my views on anything but art influence my assessment of it.  At the same time, no criticism can be done without holding one’s values in tow.  Nor can one make art without it being made out of the whole of the artist’s being.  That will come into play.  The aim is to not put the ideals cart ahead of the art horse.  I have faith this can be done by the folks behind Run Hide Fight, and I won’t be handing them any special favors.

Violence/Scary Images: Bloody violence is a frequent occurrence.  Characters are shot through the chest and head.  Blood and bullet wounds are visible.  Explosions.  A charred corpse is seen near the end of the film.  A hunting scene ends with the bloody killing of a deer.

Sexual Content: A kiss is shared between protagonists.  A woman is forced to remove her top (nothing is shown onscreen).

Positive Content: Themes of bravery, resolve, and compassion for the broken and hurt abound.  Insight into the mind of the narcissistic criminal.  Zoe is resourceful and cunning, but not indestructible.

It was difficult for me to go through Run Hide Fight, the latest release from the survivors of the now-defunct Cinestate film studio, without thinking “High School Drama Die Hard”.  It certainly wears its inspiration on its sleeve and makes no apologies for it.  At the same time, the plot of the 80’s action movie classic wasn’t nearly so present and immediate in its situational trappings as what writer-director Kyle Rankin offers here.  The subject of school shootings is a hot topic to be certain, one prone to bring fiery rhetoric about everything from gun rights to video game censorship, usually from those who aren’t experts in either topic or any of the topics in between.  Setting what is largely a standard selection of action thriller tropes against that controversial backdrop may rub some folks as being tasteless.  Maybe even exploitative.  Under certain angles, Run Hide Fight feels at times like it belongs in the same bin as grindhouse classics such as Night of the Living Dead, The Last House on the Left, and They Call Her One Eye.  The parallels could probably warrant their own article.  I’ve taken it as axiomatic that a great movie can be made out of anything, though certain types of subject matter require a deft hand, and Run Hide Fight handles itself with the deftness of a sledgehammer at times.

If “school shooter thrillers” were to be identified as its own subgenre (and I certainly hope that it isn’t), it’s not one that I’d be able to bear out with any regularity.  I recall there being a number of films oriented around the 9/11 terrorist attacks being made during the first and second decades of the third millennium of Our Lord, but only one managed to win me over as a truly worthwhile effort, and that was Paul Greengrass’ United 93.  Likewise, there’s only enough room in my heart for one film about a school shooting, and that’s Gus Van Sant’s 2003 drama Elephant.  As for films that delve deeply into the kinds of sociopathy that results in the act of nihilistic mass killing, We Need to Talk About Kevin goes further into the waters of that nightmare than Run Hide Fight ever could.

Much in keeping with the policy of conservative distributor The Daily Wire regarding active shooter suspects, Run Hide Fight keeps it primary focus of attention and sympathy on the victims rather than the perpetrators.  Zoe Hull (Isabel May) is a student struggling both with a strained relationship with her combat veteran father (Thomas Jane) who’s been teaching her survivalist techniques, and with the recent death of her mother (Radha Mitchell) who lost a battle with cancer.  Upon this canvas of quiet resentment born of untreated grief is an upcoming prom and a request from her best friend, Lewis (Olly Sholotan), to join her as her date.  All seems normal with the exception of some odd marginal behavior here and there, until a van crashes through the cafeteria, and four armed students begin to bring fear to the system.

While Zoe’s character doesn’t seem much more dynamic than the typical world-weary, combat-hardened survivalist action hero we’ve all seen a million and two times, there is an interesting thread to her arc.  The vision of her deceased mother appears to her as a person standing in the midst of the bloodshed offering her motivation, tough love, and anything else she may need but not necessarily want at the time.  It’s tempting to call the “depth” of her character as an example of the “pancake fallacy” (just because she has more than one side to her, that doesn’t mean she’s any less flat), but she and nearly all the other most important characters are played by their actors with solid cadence and believable vigor and chemistry.  Whatever issues one may have with how lacking in depth Run Hide Fight may be, it cannot be said it isn’t at least well-made.

As for the opposition, there’s little to be said about this macabre motley crew.  The lackeys are mostly one-note embodiments of teen angst and resentment that most of the time seem to just be along for the ride in order to add a bit of excitement to an otherwise dull school day.  Chris Jelick (Britton Sear) operates as something of the trigger-happy oaf who answers to a dog whistle.  His sister, Anna (Catherine Davis), moves about life as an erect middle finger.  The tech guy, Kip Quade (Cyrus Arnold), is the only one in the group who gets something of a redemption arc, though I found it to mostly fall flat when all was said and done.

It was the ring leader, Tristan Voy (Eli Brown), who was the main course of villainy here, and the writers clearly spent the most effort in embellishing him with the mentality of a nihilistic killer.  In much of the government training I’ve received, it’s been relayed to me that there are five main reasons behind the motivations of criminals such as those guilty of espionage or active shootings.  They could be summarized by the acronym “C.R.I.M.E” (coercion, revenge, idealism, money, and ego), and Voy’s character either practices or exudes almost all of them (with the notable exception of money).  While Brown doesn’t ever manage to radiate the hollow banality that real-life active shooter Elliot Rodger displayed in his manifesto video before shooting up Isla Vista in 2014, he does convey a darkly charming charisma emblematic of the standard narcissistic megalomaniac.  His motive is simply to become infamous, going down in the history books, news articles, and online trending topics as a kind of sinister celebrity, becoming most violent when his place under the spotlight is threatened.  Arguably the greatest value that Run Hide Fight has in store is an exploration of what forensic psychologists have been warning news media outlets about for years – namely that their eager coverage of such active shooters can have the negative side effect of giving the criminals what they want and emboldening future copycat offenders.

Where the film falls shortest, I found, was in how it ends its hero’s journey on a note that undermines the moral integrity and clarity of its protagonist.  Without spoiling anything, while chances at redemption are scarce, the attitude of taking pleasure in the defeat of the villain isn’t permitted. The final notes of the film, by contrast, are struck with a resonance of the kind of “an-eye-for-an-eye” morality that I was hoping we’d do everything to avoid.  It didn’t completely undermine the experience, which admittedly was very well-paced and always engaging, but it did manage to be an unwelcome bit of bitter seasoning on an otherwise satisfying, if somewhat familiar, dish.

I’ll always encourage ambitious new talent to interject into the Hollywood establishment. Here’s hoping there’s a bit more in the way of levity and sophistication the next time around.