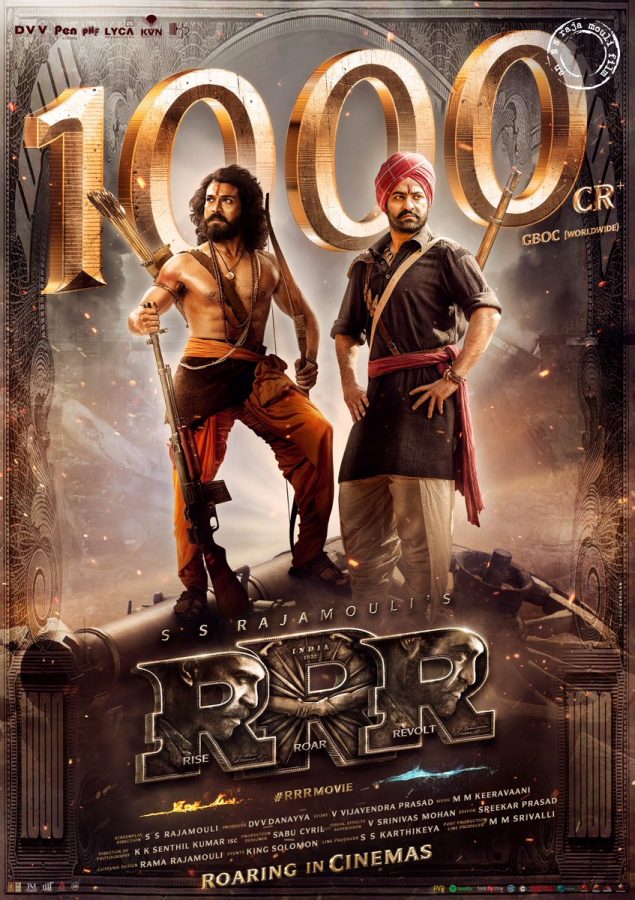 In late March, I started hearing weird buzz about a strange-sounding Telugu-language Indian film called RRR that Film Twitter refused to shut up about. Initially, I wasn’t sure if it was something I ought to check out or it if was just a weird thing that people were ranting about online. I took a chance on it and found a ratty old AMC theater south of Nashville that was still showing it after its second week and sat down with an iced tea to watch it. Three hours later I was blown away by what I saw!

Today, June 1st, RRR is being given one more encore screening in select theaters in the United States, and I am urging you to seek it out. Even if you can’t, the film has been on Netflix since May 20th and it’s been topping the international release charts!

Violence/Scary Images: Some intense images of action, violence, blood, and gore. Characters are shot, beaten with various weapons, suffer broken bones, and are stabbed and struck with arrows. A character is whipped with a thorned whip. Animals bite humans with bloody results.
Language/Crude Humor: Mild to none.
Sexual Content: None.
Drug/Alcohol Use: None.
Spiritual Content: The film draws heavily upon Hindu spirituality and Indian mythology.
Other Negative Themes: Themes of vengeance, violent revolution, and subtextual appeals to Indian Nationalism.
Positive Content: Themes of friendship, love, and justice.

I enjoy going to movies blind! There’s an excitement to seeing a movie with no expectations or foreknowledge, knowing only that people around you already like it. In late April, I took up several of my friend’s recommendations for a strange Indian film called RRR that I had never heard of, from a creative team I had never heard from, and not expecting I would be walking out of 2022’s best movie!

Indian cinema is not well regarded in the West, mostly because it is rarely indulged. Aside from the odd breakout hits like Dhoom 3 in 2016, which occasionally works their way into the weekly top 10 domestic box office, audiences only seem to engage with Indian cinema ironically. We see weird out-of-context clips of the films on YouTube and laugh at their physics-defying action and corny musical numbers.

That hasn’t stopped RRR from becoming one of the most successful films in the history of Indian Cinema, since March. The film’s international release has been very well received and it has earned a sincere cult following in the West of filmgoers who know little of Indian cinema but suddenly got drawn in by this massive undertaking.

RRR is a three-hour long historical epic set in the 1920s during the British colonial occupation. After a British Governor kidnaps a young girl from her village, two great men—Rama Raju and Bheem—find their destinies tied together in a fight over the colonial power of their nation. Both men are based on historically significant figures in the history of India’s revolutionary anti-colonial movements, although the movie is entirely a work of historical fiction. Both men never met and their real-life feats were never as impressive as the movie makes them out to be.

Again, that doesn’t stop RRR from being an absolutely massive and incredible undertaking. The Indian film industry tends to approach filmmaking with a kitchen sink design philosophy—films are always filled with action, comedy, romance, spectacle, and of course musical numbers. RRR is no different but it brings to bear some of the best examples of these genres in years. It does all of these things perfectly and with complete sincerity. Even the film’s incredibly corny and over-the-top villain—a British Governor played by Ray Stevenson—is appropriately cast against the insanity of the proceedings. He starts the movie with a villainous racist rant about how the colonials aren’t worth the cost of a bullet and proceeds to haunt the movie as a nearly unbearable and all-powerful villain with the might of the empire at his back.

The film’s scope is appropriately massive, with huge set-piece scenes, massive filmmaking, and huge stars to match, like its two leads N.T. Rama Rao Jr and Ram Charan are two of the largest stars in contemporary Indian cinema. The film’s action captures them as superhero martial arts masters, warriors with animal-like supernatural strength and the energy to single-handedly wrestle two hundred men to the ground at the outset of the story.

It’s hard not to just gush and describe every aspect of the film as great. Its musical numbers are already viral sensations. The movie was advertised with a trailer featuring its best musical number Naatu Naatu, which became a viral sensation on India’s social media channels. The film’s writing is perfect old school Hollywood melodrama and character drama, contrasting the ideologies and personalities of these men against each other just as it sets them up to become best friends by right of their shared abilities and seemingly shared values.

It can be hard to discuss RRR though in some regards because it is both a movie that appeals to a kind of perverse novelty to indulge the curiosity to engage in another culture’s wackiness without its cultural context—à la Gangnam Style—but also a sincerely perfect work of epic filmmaking that works for very unironic reasons. The film is sparking a lot of complex conversations about cultural representation and how Western audiences indulge their curiosities for cultures they don’t understand, but the fact that RRR is bringing people to the table is a point in its favor. Awkward conversations are how good conversations start. Speaking for myself, I couldn’t have told you what the difference between Bollywood and Tollywood films were before I started researching the movie after I watched it.

Thankfully, the movie is strong enough on its own that it can be enjoyed by anyone willing to give its excessively long runtime and insane set pieces a chance. RRR is a perfect action movie, a perfect musical, and a perfect story about rebels overcoming an evil empire through righteous anger and glorious revolution. It is already bound to end up being one of the best films of 2022, and considering the past five months have already given us Top Gun: Maverick, The Northman, Everything Everywhere All at Once, and more, that is saying a lot!

RRR is one of the best films of 2022 and stands as an excellent entry point into contemporary Indian cinema!