Review – Raya and the Last Dragon 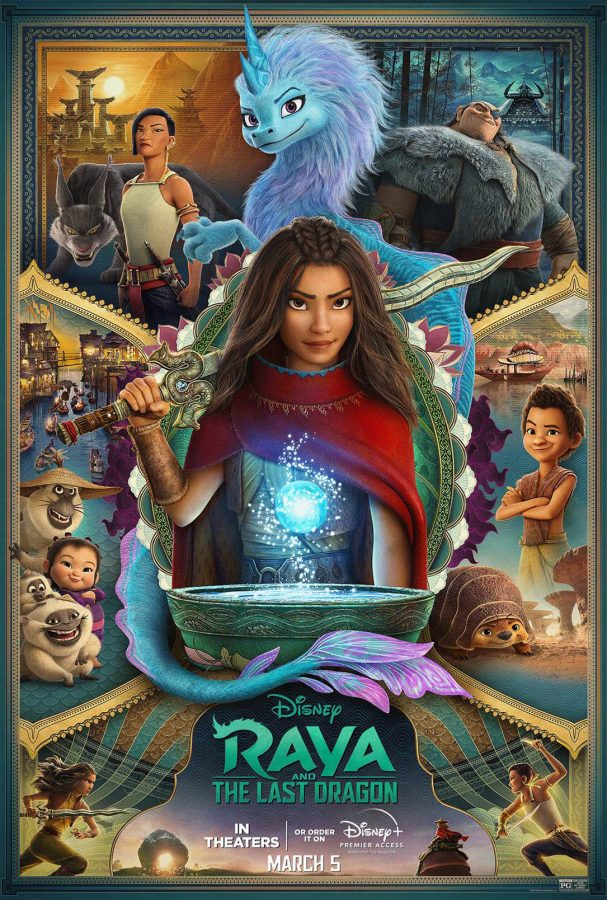 I’m not too sure what Disney is trying to make of themselves these days.  After the massive financial (and arguably moral) flop of last year’s Mulan, you’d think a significant reconsideration of what to do from here would be in order.  Obviously, some smooth-brain in there decided “in for the penny; in for the pound” and made another shallow attempt at stroking the cultural ego of “Southeast Asia” (which is not mostly China I guess, but anyway) with an ill-conceived amalgam of the most superficial elements of Disney’s recent greatest hits.  You’ll see what I mean soon.  I hope.

Violence/Scary Images: Electric-purple blob monsters — the manifestation of a plague known as the Druun — attack relentlessly at every opportunity, turning people and dragons to stone. Central characters are impacted; some sacrifice themselves (i.e., willingly turn to stone) to save others. Many have lost loved ones (including children who are without parents/family members). A main character is struck by an arrow, presumed dead. People fight with bow and arrow, swords, knives, other blades. Close-contact combat/violence. Characters must run to escape capture. Dangerous pursuits on ground, at sea. Glimpse of a skeleton. The Fang warriors ride scary big cats. A Spine warrior hurls a huge axe.

Language/Crude Humor: A couple of characters say “badaxery,” which sounds very much like “badass-ery.”

Other Negative Themes: Tensions brought upon by betrayal.  Dubious treatment of “trust”.

Positive Content: Audiences will be exposed to Southeast Asian cultures and will learn about courage, teamwork, communication, and perseverance.

Strong theme of importance of trust. Lasting messages about impact of grief and acknowledging how those you love are a part of you. Lessons about courage, teamwork, perseverance. Shows the need to overcome prejudice and assumptions to find commonalities with others.

Raya is brave, selfless, generous, kind — also suspicious and wary of accepting help, but learns the importance of teamwork. Sisu is powerful, courageous but also sweet, forgiving, trusting, empathetic. Namaari is loyal and persistent but also deceptive. Raya is the first Southeast Asian Disney princess, but the movie’s fictionalized cultural tradition isn’t strictly based on one particular country, so representation includes elements of several real-life countries.

There have been numerous times where I’ve been tempted to write one of these reviews as an open letter to the producers.  I’ve come close to giving into that temptation more than once.  This is one of those times.  The critical obstacle to me doing so is that the effort behind it would be far more forced than inspired.  Honestly, even getting through Raya and the Last Dragon in one sitting was more of a chore than an enjoyment, as was finally working up the nerve to put together this review.  One would think that with the depressing dearth of any good new releases, I’d be excited for just about anything mildly promising, especially a new original script from the Mouse House.

Look, I’m all for settled giants of the industry going out of their way with a new IP, but the fact does remain that they have to work extra hard in order to make such ideas compelling.  Frozen managed to shock the world as a new IP in a number of ways; probably the most effective was by going back to their roots as a unique brand of animated family entertainment.  Raya and the Last Dragon barely made even a splash with its release, and it seems highly unlikely that all of that failure can be ascribed to the necessity of releasing on the Disney+ streaming platform.  Many a survey has shown very little interest in what has been marketed as the flagship vehicle for Disney’s “first Southeast Asian princess”, which strikes me as another ill-fated commercial attempt at getting on the Chinese box office’s good side rather than a legitimately inspired take on the “fractured magical MacGuffin symbolically representing national solidarity among a diverse union” trope.

Kumandra was once a great and prosperous unified nation arranged along a massive river that sort of resembles a Chinese Loong, but the people were once set upon by the Druun, a malicious cloud of fire and smoke that petrifies people into stone.  To ward off the threat of the Druun, the dragons gathered their magic into a stone, sacrificing themselves in the process, leaving the people of Kumandra to live on.  Unfortunately, a great deal of civil conflict erupted over who should lay claim to the stone, dividing Kumandra into tribes named after which region of the river best represents which part of the dragon to which the river bears a likeness: Fang, Heart, Spine, Talon, and Tail.

Five hundred years later while division still remains at large, Chief Benja of the Heart tribe (Daniel Dae Kim) trains his daughter Raya (Kelly Marie Tran) in guarding the stone while teaching her that the hope of reunifying the land of Kumandra is not long dead.  What follows can at least in one sense be seen as a showcase of Disney’s most recent accomplishments.  We’ve all just had our fill for over a decade following a diverse superpowered motley crew as they seek and gather powerful stones to avert the end of the world, and now we’re seeing it in a much more truncated version that leaves much to desire this time around.

Honest Trailers put together probably the best hot take of all comparing Raya and the Last Dragon to Nickelodeon’s Peabody Award-winning animated series Avatar: The Last Airbender, but part of me saw a parallel to an even older work – or perhaps a line of work.  With the five nations of Kumandra being so distinctly rendered and identified by their culture, commerce, customs, and color schemes (the art direction is certainly the film’s greatest strength), I was reminded partly of a trend in YA fiction novels dating back at least to the four houses of Hogwarts.  These factions almost seem to present themselves as something of a “personality quiz” to the viewers, to see which of the nations they are “most like”.  Similar instances of this trend can be seen in The Hunger Games and Divergent, both of which, like Raya, feature survivalist warrior women as their main protagonists.

Sadly, Raya herself is too passive and reactionary a character to be a very compelling protagonist.  Her rival Namaari (Gemma Chan) proved to be a much more dynamic and multi-dimensional character with a more intriguing arc of development and completion by the final credits.  I honestly believe the movie as a whole would have been made that much better having Namaari take the center stage of focus, but Raya’s the one with the cute animal sidekick (played by Alan Tudyk no less), so…

What of the means of ending the plight on the land that the Druun has wrought?  Well, it’s little ill-conceived, to put it politely.  While scavenging through a shipwreck, Raya comes across the last living dragon, Sisu.  Played by Awkwafina (the only Asian girl who’s blacker than I am), Sisu operates as both the moral anchor of the film constantly seeing the best in everyone, and as an Olaf-style comic relief.  What Sisu brings to the table is where a lot of the most confused elements to be found come into play.

What little arc Raya has is found in her coming to terms with trusting the peoples of the other tribes, a prerequisite to unifying Kumandra as her father wished.  Strangely, at nearly every single turn where either Raya herself or Sisu have an opportunity to put their faith in others who could aid them, such acts of trust almost immediately wind up biting them in the backside.  What exactly are we to take from this?  Is trust something advisable or not?

It could be argued that the small band of orphans that gather into Raya’s party could present some credence to the moral validity of the rival tribes, but they hardly contribute much of anything to the drama proper.  I could hardly find any good reason as to why they had to be there except as a symbol and a witness.  With all that, the film’s grasp on the idea of “trust” seems shaky at best.

With the Druun being little more than a soulless unnatural disaster, the film is also largely lacking in a real villainous entity.  That’s not a bad thing at all, but those characters who could pose as a villain just don’t have the chops to bear that title.  Namaani’s too sympathetic and intriguing, her Machiavellian mother is too underdeveloped, and everyone else too busy cracking bad jokes to do much of anything else.

Even the mechanics of the stone itself are rather slapdash.  The magic of the stone is primarily meant to dispel the Druun and we’re made to think that it wouldn’t be so effective in its fragmented state.  Sisu even makes a hilarious satirical analogy between the stone and a live puppy in a throwaway line, but it doesn’t seem to accurately reflect how well the stone fragments work in keeping the Druun at bay.  Maybe I’m overthinking this.  Perhaps it’s meant to elucidate to the fact that the nations have some strength on their own, but are strongest when united.

I try to at least give some benefit of the doubt to works that have unrealized potential.  There was potential here.  It was the inspiration that was lacking.  Pity.

It’s not only understandable, but advisable to just wait when this becomes free on Disney+ this June 4th.