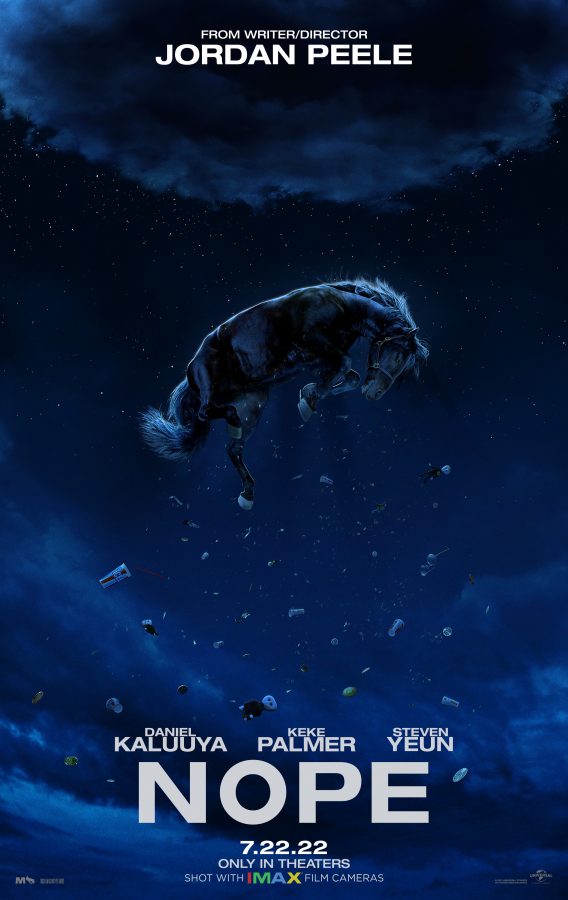 Writer and director Jordan Peele is back! Following his incredible career-defining work on Get Out (2017) and Us (2019), he’s finally emerged from the COVID pandemic with his third major project, not counting his not terribly great TV reboot of The Twilight Zone. After three years, he’s returned with his largest and most ambitious project to date, a massive science fiction horror/comedy set against a UFO abduction story!

Violence/Scary Images: R-rated horror content, blood, death, and suffering. Characters are eaten alive in one scene, several scenes of intense blood and gore, and large volumes of blood are shown on screen. A woman with a horribly scarred and mutilated face is seen for one scene.
Language/Crude Humor: Severe language throughout including f*** and s***.
Sexual Content: Nothing depicted. One character is a lesbian and brags about sleeping with her therapist.
Drug/Alcohol Use: Minimal to none.
Spiritual Content: None.
Other Negative Themes: Depictions of violence and death.
Positive Content: Themes of family, protection, and overcoming impossible odds.

I can already tell that Jordan Peele’s Nope is going to be one of the most discussed films of 2022, and frankly, it deserves as much. It is the most ambitious of his three film projects thus far in terms of size and budget. It’s shot on IMAX 65mm film and displays some of the most expensive and massive special effects he has attempted so far. Additionally, Peele is one of the most watched and celebrated directors of the past five years. That’s ultimately the challenge that people are going to face when discussing this film. How does it compare to Get Out and Us? Is it his best film? What is it saying about Black identity and America, given how deeply his first film penetrated the zeitgeist in the aftermath of the last decade of cultural chaos?

I don’t think Nope is going to hit the zeitgeist in quite the same way as Get Out, but personally speaking, I’d say it’s my favorite of the three just because I like its subject matter—UFOs. I’m a minor UFO nut with a fascination with the unknown and the supernatural and I love movies about the subject. And it would appear Peele is too, given how much he references mainstay alien blockbusters like E.T, Signs, and Close Encounters of the Third Kind in Nope. Its primary influence though would likely be the 1993 horror film Fire in the Sky, a movie about the horror of UFO abductions.

Nope has a complicated setup, one that I imagine will be sparking a lot of fascinating discussions about the history of Hollywood, the predatory nature of the entertainment industry, and the nature of filmmaking itself. Our characters are a family of horse breeders well known in Hollywood as one of the oldest in filmmaking, as their great great grandfather was the first man ever filmed riding a horse. The family is dealing with hard times and has started selling off its horses after their dad died in a freak accident. When a mysterious flying object is seen kidnapping one of their horses, the siblings decide to try and capture it on camera, only to slowly realize they’re dealing with something they don’t fully understand.

I won’t say more than this because the trailers have been deliberate about hiding information. The actual premise of the film was hidden for a long time prior to some of the later trailers which revealed the actual UFO.

Topically, the film is playing into recent headlines about the US government’s slow revealing of secret UFO knowledge and footage, but the movie takes an interesting perspective in its depiction and revelations about what is actually happening and why. Our lead characters are thankfully very intelligent and perceptive to the point where they can read the room and not make basic mistakes.

Part of what makes it interesting though is how much of a genre mashup it is. It’s obviously a horror/comedy like Peele’s previous films but the genre here leans very hard into science fiction and western aesthetics and themes. There’s a fascinating triumphalism that comes into the film in its final scenes as the characters finally gain an edge in the story and the tone shifts from horror to western. Suddenly these characters stand tall and confident, with an old Hollywood coolness. The horror of the film’s earlier scenes gives way and we’re left with these characters at their best.

I wouldn’t say the movie has backed away from Peele’s career-defining politics but I would dare to suggest that his accomplishment with Nope is a more personal one—a victory lap for the idea of Black filmmakers and the role they play in Hollywood as marginalized outsiders, living on the edges and attempting to do the impossible. The film’s setup and ending affirm this, capturing a story about the role Black filmmakers play in the entertainment industry in even its most remote corners.

It’s not blunt in this regard, as the race of its characters is mostly incidental to the main story, but the movie does make it clear from the outset that this is a story about Black filmmakers and it depicts the dangerous realities of the film industry, the uncontrollability of predatory forces, and the need to outsmart forces beyond your control. It is a mark for director Jordan Peele that he’s been given a unique voice in culture, and that he’s eager to find new stories to tell while celebrating the role Black Americans play in this art form.

It also just so happens to be one of the coolest and scariest UFO films ever as well!

Nope probably won't break through the zeitgeist like Get Out did but it is nonetheless another very good entry in the filmography of Jordan Peele, and maybe one of his most confident and effective projects to date!