Review – News of the World 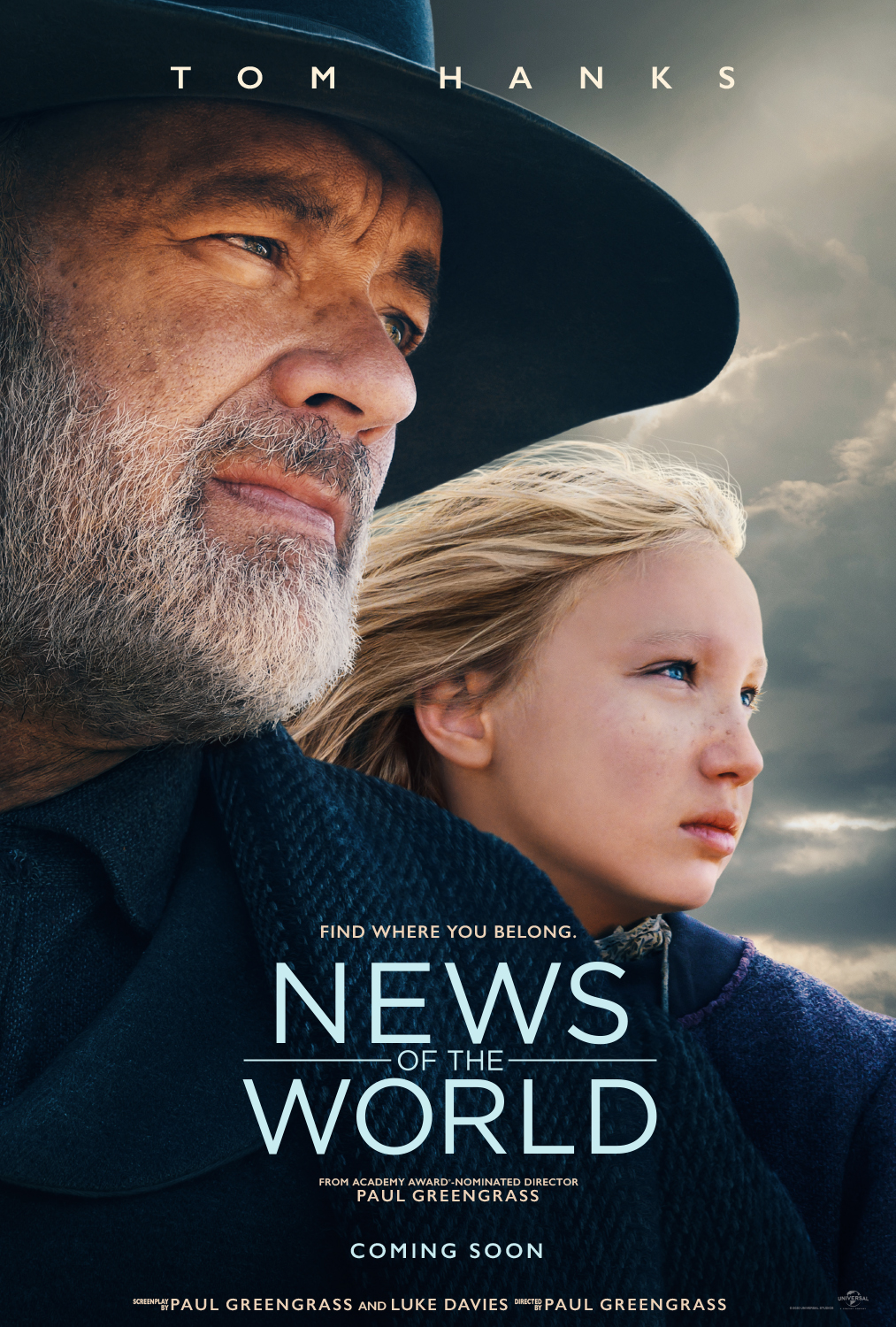 When a grizzled old gunslinger stumbles upon an abandoned child in the desert, he must fight his way through bandits and the elements to return the child to their people. No, I’m not talking about The Mandalorian…

I’m talking about the new wide-release film from director Paul Greengrass (Bourne Ultimatum, United 93, Captain Phillips) that is currently running in the five or so remaining socially distanced movie theaters in the United States. This grizzled modern western flick proves itself an enjoyable but flawed Oscar-bait flick!

Violence/Scary Images: PG-13 chase sequences and action scenes. There is a gunfight with several individuals dying of gunshots. A wagon crash results in the injury and death of two horses.
Language/Crude Humor: Some serious language including g**d*** and s***.
Drug/Alcohol References: Casual smoking.
Sexual Content: Implied sexual activity in one scene but nothing depicted. Three men implicitly want to rape a female character.
Spiritual Content: Several of the characters are implicitly Christian, most of the Native American characters are practicing their traditional beliefs.
Other Negative Content: None.
Positive Content: Themes of family, selflessness and communication.

It’s not surprising that News of the World opened up in third place behind Wonder Woman 1984 and The Croods 2. Even if it wasn’t a family movie or a blockbuster, the film has essentially been doomed to obscurity by the circumstances of the moment but it’s clear that this was, at one point, going to serve as a pillar in this year’s Oscar discussions.

That’s not surprising as this wasn’t the first time Greengrass has earned critical acclaim by teaming up with Tom Hanks. If anything, this film was clearly intended as a star vehicle for him.

Our lead character is Captain Jeff Kidd. “Captain” (Tom Hanks) is something of an oddity as his career is that of a traveling newsman who goes from town to town reading the highlights of the national and international news to the hardworking working class people of rural Texas. As he’s traveling one day, he discovers a raided army cart with a young girl hidden by it. The girl turns out to have been an orphaned German immigrant named Johanna who was adopted into the Kiowa tribe and orphaned a second time when the army removed her people of their lands by force. Realizing there is nobody left to protect her, Captain Jeff decides to personally escort her to her surviving relatives.

There’s an element of too cute/clever commentary happening in the film in the background of the film’s very basic setup.

Our lead characters job as a prototypical news man means he travels town to town and learns of the various problems happening on the frontier. This feels like something of a nod to the modern concept of news broadcasting and he plays a very similar role to the traditional conception of how we hold up journalists today. He’s an upstanding moral voice and a mediator who helps to relieve the tensions of the day by expressing people’s populist angst and telling them stories that draw out their emotions.

Such a job and position make him highly convenient and mobile for the setup of our story. The film’s time and setting are important to the themes and seemingly echo some of the stresses of our modern life. Set in Reconstruction-era Texas in 1870, most of the characters we meet are Confederate Civil War veterans. All of the major cities visited are occupied by Northern troops who constantly have to step in and resolve disputes.

It’s clear that the rage under the skin of these citizens is near a boiling point and that most of these men are a hair-trigger away from picking a fight and restarting the war. With the widespread migration of settlers to the west and the displacement of Native Americans happening as all this is ongoing, it’s clear that the world of this time is replete with corruption and immorality.

Such a setting and time period lends itself to a very loaded premise, but for the most part these ideas are just floating in the background of our story.  The structure of News of the World is very episodic. We’re given pastiches of different groups of characters and social problems as our lead characters walk by them. The march of history is just something slowly happening around these two figures as they try to resolve their small story.

That’s nothing new for a western, and several of the westerns alluded to in the film, like Red River and Cheyenne Autumn, draw heavily on these themes as well. I will say that I’m not sure it doesn’t somewhat rush through them. The episodic structure makes motivating the characters we meet challenging and the conflicts that arise on the way feels melodramatic at times, especially when you realize you don’t necessarily know why the characters are doing what they’re doing.

The worst example comes at the film’s midpoint where the characters are leaving Dallas. The Captain is propositioned by a group of poor Ex-confederate soldiers to “buy” the girl off him and he refuses. The soldiers then chase down the Captain and Johanna and get into a shoot out. The chase and gunfight are intense and contains some of the best dramatic moments of the film but it’s never clear WHY these guys want this girl so badly.

Jankily written characters and underdeveloped performances are a problem all around. Tom Hanks ends up being probably the weirdest choice for a character like Captain Jeffrey Kidd. Kidd is written like a character with a really complicated and haunted past with regrets and deep emotional pain. Hanks’s go-to emotion in all of his performances is to play up the “good guy” side of his personality. You always believe that THIS GUY is a good man while he’s on screen. I just couldn’t believe this character regretted the things he’d done until he literally explains all of his regrets to the audience. You don’t feel the lifetime of age and failure that you feel in Jeff Bridges’ performance in True Grit or Clint Eastwood’s performance in Unforgiven.

Faults aside, News of the World is a good western! Nowadays when the western genre is dead, that’s all you can ask for some days. As a film though, it’s a few screws loose of becoming something greater than it is. There’s a huge story happening in this film and it’s relegated to the background. That doesn’t mean it isn’t fun to watch this odd couple learn to communicate and become a strange sort of family, but ideally that story should’ve been more affected by the rolling tides of history.

News of the World is a gentle drama that settles into a pretty good western on its own terms, but it's hardly an instant classic of the genre.