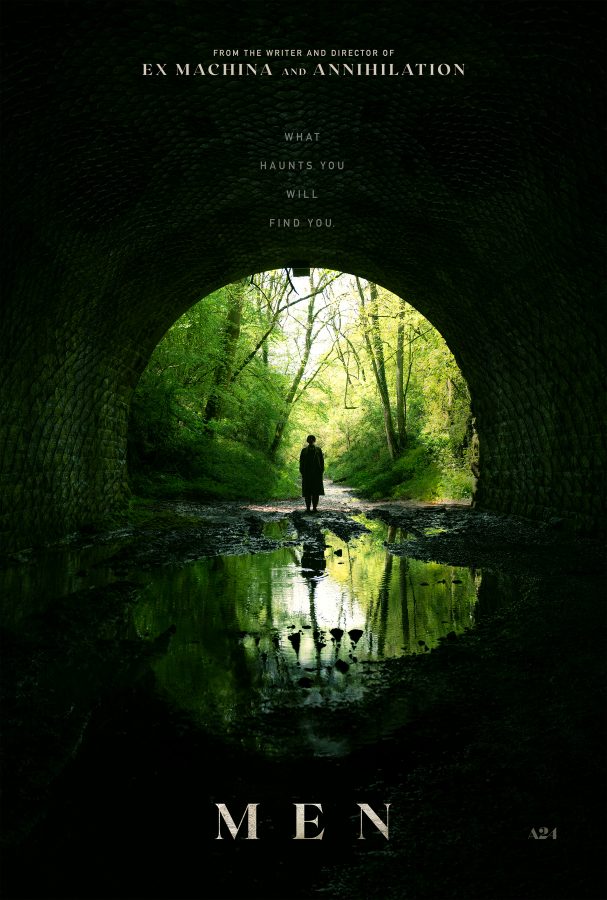 Writer/director Alex Garland has returned for the first time since early 2018 with his newest film, Men. Whereas his previous outings were science fiction films that offered a level of high concept spectacle to their premise, here he has chosen to work purely in the realm of cerebral abstract horror, à la the likes of Hereditary, Raw and Antichrist.

Considering it opened in fifth place with less than $3.3 million at the international box office, and earned a low audience score of 48%, it would appear its politically topical commentary on toxic masculinity and gender inequality hasn’t been well received by the general public.

Violence/Scary Images: Extreme violence throughout the movie. A man commits suicide and his body lands on a metal fence; it is very graphic. A man hits a woman in the face and she bleeds. A woman stabs a man’s forearm and splits it in half. A naked man covered in cuts is depicted. Several extremely graphic body horror scenes.
Language/Crude Humor: Severe language throughout including f***, s***, and b****.
Sexual Content: Rape and sexual themes are discussed throughout the film. Several male characters are depicted with full frontal nudity in a non-sexual context.
Drug/Alcohol Use: Casual drinking is depicted.
Spiritual Content: One of the villains is a vicar who is depicted as a potential rapist.
Other Negative Themes: The film is extremely dark in its content and contains excessive violence that is not suitable for all audiences.
Positive Content: Themes of self-worth and rejecting toxic attention.

It doesn’t surprise me that Alex Garland’s Men is the most controversial and political work of filmmaking so far in 2022. Its title and trailer set very specific expectations that it was going to be an overtly feminist film in its exploration of male-female dynamics and relationships. The media is certainly feeding the flame of that controversy as well. The fact that RollingStone happened to run a review titled “Men Reminds Us Men Are Awful” should be an indication what we’re working with here. Audiences are going to be prejudiced either for or against this film going into it.

It did surprise me though that it didn’t fall apart upon execution or descend into a cheap allegory. Maybe that shouldn’t surprise me though too. It is coming from one of my favorite filmmakers. I can’t begin to describe just how deeply the works of Alex Garland have become to me in a short time. Ex Machina was a brilliant film in 2015, but it didn’t fully sell me on Garland as a filmmaker whose career I actively wanted to follow. Annihilation is the one that did, crafting one of the most engaging, dense, and emotionally complex explorations of trauma and regret put to screen. It’s a movie I still rewatch at least once a year or more.

Tarantino once dismissed the works of Garland early on in his career as that of a pulpy schlockmeister; someone who too deeply enjoyed the aesthetics of genre to write something profound. This was early on though in Garland’s career when he was still a frequent collaborator of Danny Boyle. His works have trended more serious and heady with every release, culminating in the slow burn cerebral Hulu miniseries, Devs, in 2020.

That trajectory makes a film like Men seem almost inevitable, that Garland would eventually fully abandon his genre trappings to descend deep into the realm of pure metaphor and subtext to fully explore the themes he’s subtextually used his science fiction aesthetics to explore: relationships, failure, self-loathing, mysogeny, etc. That doesn’t mean of course that he’s given up the horror aspect of his films…

Men is a film you can describe the actual plot of fairly easily. A young woman, grieving the suicide of her husband who she was in the process of divorcing, moves to a countryside cottage to heal and work remotely when a mysterious naked stalker starts trying to chase her down and hunt her while all of the male influences in her new neighborhood downplay the situation and put her in further danger.

It is a very blunt setup as far as storytelling goes and one that doesn’t seem to set itself up for nuance or meaning any deeper than just scolding men for their failures in the post-#MeToo and post-Roe-vs-Wade world. It could’ve descended so easily into a violent power fantasy for women seeking vengeance against their oppressors, as did the likes of Promising Young Woman, or simply propagandized a real historically vague event by looking at it through the eyes of modern gender politics, as Last Duel did. Upon final analysis though, it’s a bit more complicated than that.

The casual coldness and microaggressions you would expect are all there, with prominent scenes of mansplaining and men defending spousal abuse as not being a big deal. As it becomes clear, all these male influences are, to borrow a quote, homoousion—of the same stuff as one another. The condescension of a priest dismissing marital abuse is revealed to be no different than the policeman who releases a violent criminal back into an innocent neighborhood carelessly, which in turn is all just a manifestation of sorts of the emotions that drive her mute nudist stalker.

The film doesn’t fully come together till its final minutes, but its opening scenes reveal much of the film’s thematic weight: a husband threatening to kill himself if his wife leaves him. This is a movie about the power people exert over each other, the power of men over women but also women over men, and how broken power relationships cut down to the core of us. It even ends up being somewhat more sympathetic to the men than one would expect, even as it castigates them as stalkers and brutes. As my colleague, Lindsey Dunn, writes, “the men are broken and need her love. They can cause harm, but she can withhold and therefore exert a terrible power. This is never explicitly stated but it’s written into the fabric of this complicated story.”

The film starts with the bluntness of Get Out but slowly transforms into the abstract self-loathing of I’m Thinking of Ending Things, into a Kaufman-esc horror film about the disintegration of the self in codependent relationships and the existential angst beneath both sexes—the female fear of male violence and the male fear of rejection—set against the dual horrors of birth and death. It is a film that dramatizes the concept of the fear every woman feels when she is alone in a parking lot at night with strange men, not knowing if she can trust them, and it manifests that fear into a looming, creeping primordial horror that is always at the edges of the screen.

Again though, I’m sure it will not work for everyone. Men is a grotesque, disgusting, nailbiting, and blunt work of horror that does better than it should. Its final images, indulging some of the worst body horrors in a film you’ll see this year (shy of Cronenberg’s Crimes of the Future), burn onto your eyes and stay there. It says what it wants to say.

But feminists and anti-feminists alike have their criticisms of it. It is a message movie and one that has to violently drag its audience through the horrors of life to fully grasp the simple truth of how abusive the simple act of a threat can be. And that clearly doesn’t work for everyone. I suspect Garland may very well retreat back into genre with his next outing, where he can hide his subtext a little deeper and rely on audiences to turn out for spectacle, for better or worse. That is assuming A24 doesn’t put him in director’s jail for directing a box office bomb…

Men is a movie that is doomed to divide audiences. Its topicality will automatically turn off some audiences and its nuances may otherwise cloud the moral stridency of its fans. Its gore alone should dissuade sensitive audiences.