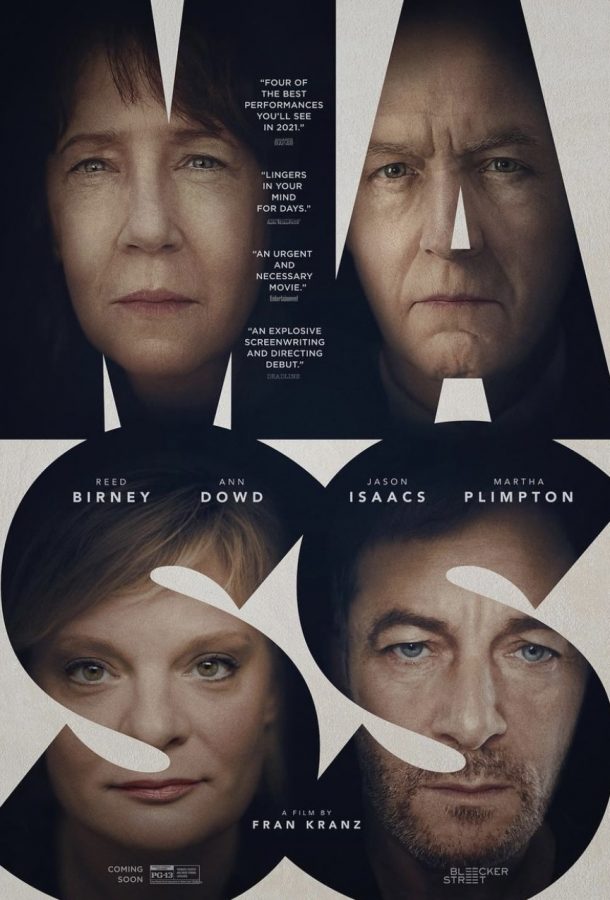 I haven’t had much time in the last year to catch many independent films. COVID-19 made driving downtown to Chicago hard to do. Then I moved to Nashville and it took a while to find a new independent theater that curates foreign and limited release films. Now, I finally have the free time and money to catch up, trying out new movie theaters. I finally had time this past Friday to do some catch-up and visit a local theater that plays independent films and I am happy to say the first film I saw was impressive!

Violence/Scary Images: None aside from descriptions of school shootings and dead bodies.
Language/Crude Humor: Heavy language throughout the film.
Sexual Content: None.
Drug/Alcohol Use: None.
Spiritual Content: Themes of the loss of faith, grief, and forgiveness.
Other Negative Themes: Depictions of hatred, rage, emotional distress, and trauma.
Positive Content: Themes of healing and forgiveness.

I went into Mass with very limited expectations. To be frank, I partially went into this movie just because I wanted to get out of the house. I just moved to Nashville last month and I wanted a chance to visit the local art house theater, The Belcourt. I understood vaguely that it was a drama and what the subject matter was but beyond that, I walked in mostly blind, without having read reviews. I walked out feeling like I’d just experienced something unexpectedly powerful, quiet, and painful. Mass is a very low-budget drama, set mostly in a single location with most of the film’s two-hour runtime being set in a small back room of an Episcopalian Cathedral in a small southern town. It’s just a story of two couples sitting down to talk yet it reveals itself to be quite harrowing.

For the first thirty minutes, the movie is quite coy about what is actually happening in the plot. We’re introduced to the church and its secretary as they’re preparing for an unstated meeting that’s supposed to happen that day. They’re cleaning and preparing food when a woman shows up who appears to be some sort of representative or agent. Then the two families enter the film. They’re escorted to the room and make awkward small talk for several minutes. For the first 20 minutes, they don’t address the elephant in the room. They don’t express to the audience why they’re there.

That’s the point of course. Mass is a drama of manners and emotional repression. It’s a story about characters who have bottled up their emotions for six years and who are only now getting a chance to process them honestly. We feel tense because we share their anticipation and anxiety. That’s because, as we slowly find out, both couples were the parents of school shooting victims. Specifically, one set was the victim and the other set of parents raised a school shooter that killed at least ten people.

Mass is a drama of emotional processing and the complex emotions that form in the minds of its four main characters. The meeting between the couples was arranged just as a means to clear the air between two families who haven’t privately fully worked through their public drama. Specifically, the film suggests the families had public shouting matches or possibly legal/political drama in the past after the shooting.

At times, the movie skews closer to a shallower more cliche version of itself. One of the dads (Jason Isaacs) is revealed to have become a political activist since the shooting, trying to push for gun control and video game bans. The debate in the movie is tedious but even the characters themselves acknowledge it’s not what they came to discuss and try to bury the topic. The heart of the story in Mass is the realization there is no clear catharsis to something like a school shooting. There is no clear demarcation point where an innocent child becomes a cold-blooded murderer. There are only parents doing their best and the cold hard realization they failed in some wholly unspecified way. No matter how hard you tried, you raised a murderer and there’s nothing you can do to fix it.

The true horror for parents of victims of school shootings, and the parents of school shooters themselves, is that your world stops. Your world crashes down around you and you’re forced to live with the cold hard statistics of the situation, learning intimate details of how your son or daughter lived their final terrifying moments. For these parents, they’ve all channeled that grief in different ways. Some try to use the circumstance to create change in the world. Others are forced to step away from the public light and bottle up their grief in shame, not properly processing or grieving.

All of this nuance is communicated beautifully in the film’s four main performances. Reed Birney, Ann Dowd, Jason Isaacs, and Martha Plimpton give career-best performances. They open up and leave the film a raw and unfiltered emotional glance into these broken people’s interior lives. By the end, the movie fully develops into one of the most beautiful explorations of forgiveness, grief, and healing I’ve seen dramatized. It takes these cold, broken characters and brings them to a place of emotional honesty that allows them to finally see the light at the end of the tunnel, and the rays of light that will hopefully allow them to see their lost son again after they die.

Mass is a rather small film set almost entirely in a single room, but it's one of the most emotionally deep films of the year with a deep heart for broken characters and a willingness to tackle challenging themes and character motivations.