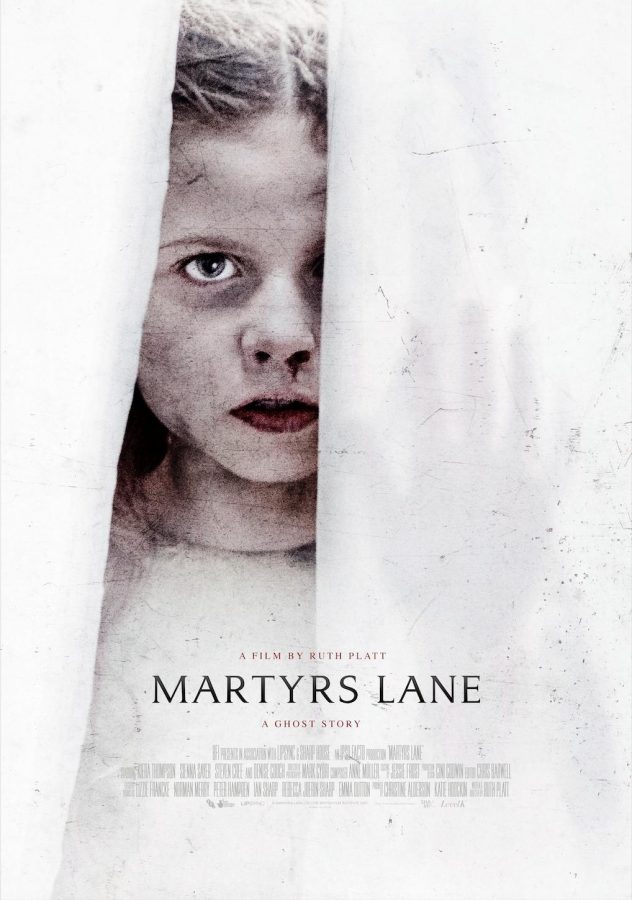 With a title like Martyrs Lane, it’s clear this Shudder exclusive will be a horror film with a touch of Christianity. Yet it’s certainly not the first time this particular genre and religion have crossed paths. Portrayals of Christianity in film aren’t always fruitful, even from a purely artistic standpoint. Thankfully Martyrs Lane is one of the rare gems that manages to balance the nuance of the pressures found in a Christian’s walk with the realistic terrors that life throws at humanity regardless of our religious affiliation.

Violence/Scary Images: This film is categorized as a horror, so scary imagery is to be expected. Some surreal dreamlike perspectives and quickened editing create jump scares. Small amounts of blood are seen on various objects, such as dislodged teeth or a button. One scene of gore where a maggot-filled injury is given a close up. One character has a creepy, supernatural appearance/origin and is a central figure to the plot. A teen slaps a child across the face. Deceased infant animals are seen. The film thematically covers the topic of child death.

Language/Crude Humor: There is one scene where family members share uncouth stories about bodily functions around the dining table, which make the mother uneasy to continue eating.

Spiritual Content: The film is set in a vicarage and follows the daily goings of the priest’s daughter. Several Biblical passages and stories inform the audience of the film’s central themes. One character has a supernatural presence, whose existence doesn’t exactly follow Biblical principles, although that part of the plot can be interpreted on a metaphorical level.

Other Negative Content: The central family in the story don’t communicate openly with each other, keeping secrets which ultimately cause hurt via isolation.

Positive Content: The film encourages people to open up about their grief, and fosters a continued interest in helping others and those less fortunate.

Disclaimer: Geeks Under Grace were provided with a screener copy prior to the film’s release.

This Biblical verse has always succeeded in firing up my imagination—as I’m sure it does for many others—so it was a delight to see it feature early in the film, Martyrs Lane, as it perfectly teases the events to come.

In many ways it operates as the motto for the story’s young protagonist, Leah, portrayed beautifully by Kiera Thompson in her feature length film debut. The camera lingers heavily at Leah’s height as the audience is introduced to this character’s world. She leads a rather unremarkable life, passing unnoticed through society. She’s cruelly teased by her older sister Bex, and it’s clear her mother is forever both a mystery and intangibly distant. Yet despite Leah’s constant sense of melancholy, she does possess the Holy Spirit; living in a vicarage and the daughter of a priest, she has a willing attitude of getting involved in her local community and assisting or otherwise interacting with those less fortunate.

No characters in this film are perfect, including Leah. This household has a habit of withholding secrets from each other. Leah’s stuck at an awkward age where she still possesses a naïve childlike optimism towards the inner workings of the world, yet she’s also mature enough to realize that not everything is quite right. The film purposefully takes its time to live alongside Leah’s character in order to establish her willingness to as to why she’d even consider reaching out to the creepy little girl that’s inexplicably flitting about the neighbouring woods.

Martyrs Lane isn’t your typical horror film. It doesn’t rely on cheap jump scares or conversely depend on graphic scenes of violence or gore. Some people like those things; to cuddle up and chuckle at the brief jolt of a musical stinger or to gasp at the depravity of a situation. If you trend towards that type of horror, then Martyrs Lane isn’t for you. In fact, it’s hard to categorize the film as a horror at all, as it barely seems interested in terrifying its audience, rather it’s more intent in telling a spooky mystery.

Martyrs Lane is certainly more atmospheric than others in the genre. A shadow might dash from one side of the screen to the other in the background from time to time, but for the most part there are no bumps in the night. It’s fortunate as a lot of those types of tales are now becoming stale and cliché. Instead, Martyrs Lane tackles its subject matter head on, as Leah develops a bond with her mysterious young, nightly visitor. The story starts to adopt the same tone as Let the Right One In and A Monster Calls, as Leah persists on interacting with this strange girl partly due to her Christian upbringing, even though such actions may flow against her own good judgement. Instead of offering scares, an impending sense of dread develops in its place. As the visits slowly take on a more sinister undertone, the film begins to focus on another Biblical story to use as an allegory for its final message.

As a mystery, Martyrs Lane isn’t the strongest narrative around. It doesn’t take much for audiences to piece together the largest chunks of the puzzle within the first act, leaving only the finer details for the finale. Where Martyrs Lane shines, however, is that it’s not solely reliant on the mere facts of the story, as the film gradually divulges the why throughout its nicely paced journey and still packs an emotional punch in its closing moments as the narrative’s thematic elements come to a head.

For all its flaws, there’s much to love about Martyrs Lane. In many ways it embodies the odd subgenre of “Christian horror”. Religion makes a frequent appearance in horror due to its inclination and openness towards all things supernatural. Although lately if a film isn’t fixated on demons or the powers of darkness, then it instead unfairly portrays believers as psychotic fundamentalists with a warped perception of reality, sending the message that religion and its followers are the real evil in this world. Martyrs Lane refreshingly does neither. Despite its prevalence in the motivations of its lead character, it’s a film that doesn’t seek to propagandize its audience with a critique about organized religion, rather the religious beliefs merely form the setting, and instead the story wishes to explore the complexities of grief and other human emotions, much like how The Babadook and Relic approach their subject matter.

In this way, faith in this film is expressed with an unpressured genuineness that’s rarely seen in cinema as a whole. It’s not trying to sell the audience anything—Leah isn’t painted as this perfect soul that leaps at every opportunity to spread the Gospel as though every facet of Christian expression must be portrayed as positive lest the viewer dare to suspect otherwise. Likewise the opposite is true; the Christians in this film aren’t completely unreasonable, pesky pious accusers that ruin the lives of others. Instead we follow a family that just so happens to follow God. There are no clanging of cymbals when a character helps another; Martyrs Lane beautifully captures just how mundane, humble and ordinary serving another should be, as though it’s not an action that deserves unique attention because it’s an act that has become second nature. It’s a film that has the maturity to look past the surface level of religion and to start tackling some of the more nuanced issues, such as how Leah’s life frequently seems to take second place when the family decides to care for another, although it’s not explicitly addressed. Martyrs Lane gorgeously aches with the situation it conjures, flooding the audience with its final haunted emotion, which sadly cannot be discussed in-depth without spoilers, much like the taboo feelings the story itself explores.

This subtle mastery is all thanks to relative directorial newcomer, Ruth Platt. She allows the narrative the chance to breathe and develop at its own pace, resisting the urge to hold the audience’s hand. Some parts of the finale get a little theatrically cheesy, though it’s easily overlooked given how much time she invests in building up Leah and her relationships with the other supporting characters. Both child actors are young, though under Platt’s direction they manage to play their parts well without distraction.

Martyrs Lane finds its stylistic inspiration from British and Spanish gothic films, and like The Orphanage, it successfully hits its emotional beats. Yet if there was one final criticism, then it simply doesn’t spin a tale as thought-provoking as any of the other movies mentioned within this review. The plot contains a number of little tendrils and not all of them are addressed; some ideas are simply too disparate and lack the power of a tightly-woven narrative. Then again, Martyrs Lane feels like a movie that could potentially deliver more to viewers that are willing to put in extra effort—a single watch may not cover all the themes the story wishes to tell.

In short, Martyrs Lane is an understated precious gem of a horror movie that will be appreciated by Christian audiences.

- Gets too cheesy at the end.
- Not all of the film's ideas come together.
- Some horror fans will hate it because it's not your typical scary movie.

More creepy than scary, Martyrs Lane is a horror film that will be appreciated by those that are usually turned off by the genre’s propensity for violence, instead offering a delicately nuanced tale concerning a Christian character.