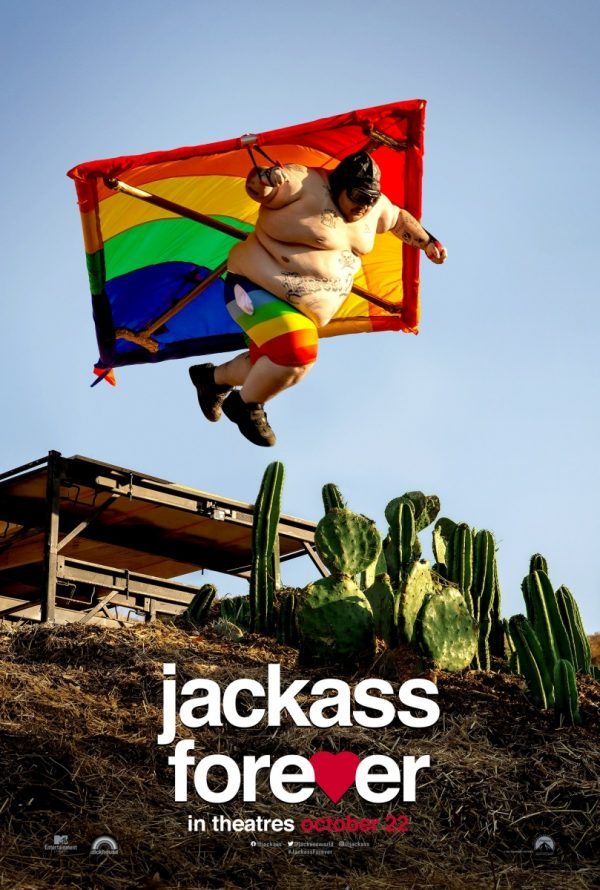 The Jackass franchise has existed since 2000 and consists of the original TV show, three films, a spin-off Bad Grandpa film, and inspired half a dozen offshoot franchises. Now after 22 years, the franchise is back once again with the fourth canonical entry in the series.

The original actors have aged up and two major cast members are gone: Chris Dunn and Bam Margera. Regardless, this is a Jackass film in all of its dumb, grotesque glory, and fans of the franchise can enjoy their chance to see their franchise on the big screen at least one more time!

Violence/Scary Images: Some cringe-inducing violence and gore. The cast are repeatedly severely injured or bitten by animals and insects.
Language/Crude Humor: Severe language throughout including dozens of uses of f***, s*** and more.
Sexual Content: Frequent full-frontal male nudity and excretion jokes.
Drug/Alcohol Use: None.
Spiritual Content: None.
Other Negative Themes: Crude humor and disgusting scenes that will off-put the easily disturbed.
Positive Content: Comradery and nostalgia.

What does Jackass mean in 2022? The franchise premiered with its original TV show in October 2000, in a world before 9/11, the War on Terror, and every other major event of the past twenty years. This was the era of Bum Fights, Girls Gone Wild, and CKY; an age when edgy teenagers were bored and in need of extremely shocking content that transgressed boundaries and found humor in cheap gross thrills. Teenagers would order DVDs of Steve-O using a stapler in horrific ways or running around setting naked women on fire as a joke.

But that was another time—a less chaotic time. Jackass Forever is coming 20 years after the franchise started, a reality the stars acknowledge multiple times. Most of them are in their 40s and 50s, and by all rights this act should be embarrassing and dumb. Its pointless chaos and idiocy should feel out of date after two decades.

And it’s certainly dumb. The film starts with an homage to Godzilla, but as the camera pulls back it reveals the lumpy misshapen beast is actually male genitalia dressed up with paint and googly eyes, that begins jokingly killing off the cast of the film before a real-life snapping turtle bites the actor’s genitals. It’s crude, disgusting and graphic but it’s trying to make you laugh in the most guttural and mindless way.

Frankly, the film isn’t really shocking. I haven’t watched the three Jackass films but I’ve seen episodes of the TV show, and I can say this mostly matches the content of the original series. Shy of the age of the actors, Jackass Forever is just a continuation of the same dumb humor and dangerous stunts, loosely edited into a movie.

In the age of the internet though, it’s hard to say Jackass Forever is shocking (that is more of a commentary on society than this film). The only thing this film contains that you can’t find on YouTube is full-frontal nudity. There would almost be something quaint about a comedy film about men being hit in the balls if it wasn’t actively trying to be gross.

The only thing that makes Jackass Forever different is its cast. The film is being released in the age of nostalgia and the original core cast of Steve-O, Johnny Knoxville, and the crew is certainly bankable, maybe enough to make the film profitable. There are tons of huge celebrity cameos including Eric André, Tyler the Creator, Tony Hawk, and Machine Gun Kelly who all show up for one or two big setpiece moments. It is slightly weird though. There are several points in the film where the camera focuses on them and they talk about how they’ve been watching Jackass since they were 12 years old, and now they’re in the fourth film.

I guess there’s something weirdly wholesome about the film in that regard, and that regard only. It’s a reunion film and it’s occasionally trying to bring back warm fuzzy feelings. The best thing I can say about the film is that the comradery between the cast feels authentic. These are real friends and colleagues who love each other and enjoy what they’re doing.

Weirdly, the film’s largest controversy has to do with the drug use of one of the film’s cast. CKY member Bam Margera was fired from the set of the film after it was revealed he tested positive for Adderall, which could’ve harmed his ability to safely perform stunts on set. Steve-O, famous for his own former drug addiction, called him out and Margera tried to sue the production. The film’s disclaimer that it takes safety seriously must mean something after all.

I don’t know if I’d call Jackass Forever anything of worth. The audience I saw it with was electric and laughed/groaned the entire time. Certainly, it’s funny at times. Not all the sketches were all that appealing to me personally. I don’t enjoy gross-out sketches or ones that involve animal bites. The freak-out segments and nutshot segments though are consistently amusing, if cringe-inducing.

As a whole, the entire exercise is one of nostalgia. It’s almost identical to the Jackass films that came before, and if those appealed to you I imagine you might enjoy it. Beyond that, it’s just gross. At the very least I can say it wasn’t an embarrassing attempt to drudge up the franchise. There’s not much these guys haven’t done that would embarrass them more than they’re already willing.

Jackass Forever is a nostalgia film meant to appeal to fans of the original TV show and the trilogy of films. If you liked those, you'll enjoy seeing most of the original cast back and doing more incredibly dangerous stunts for your amusement.