Review – In the Heights 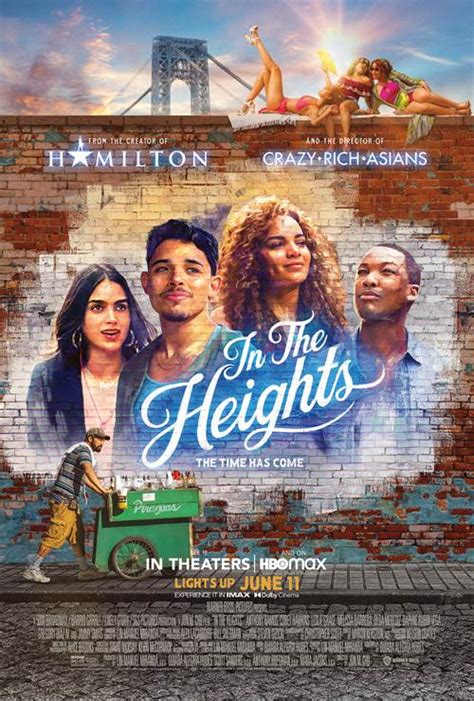 2021 has two major Hispanic-themed musicals dropping this year. The largest is Steven Spielberg’s attempt to remake the classic musical West Side Story. The second is from Hamilton scribe Lin-Manuel Miranda: In the Heights.

One can probably see the Hollywood logic why both of these films are dropping six months apart. It’s not that musicals are a dime a dozen nowadays outside of Jersey Boys, The Greatest Showman, Cats and La La Land. Some studio probably noticed a big-budget remake of a classic Hollywood musical was dropping and asked “what do we have the rights to?” Still, it is a curious film to drop nonetheless, if for no other reason than it’s dropping in the aftermath of last year’s ultra-successful release of Hamilton on Disney+.

Violence/Scary Images: None.
Language/Crude Humor: Frequent language throughout including a**, d*** and s***.
Drug/Alcohol References: Frequent and heavy drinking.
Sexual Content: A lot of crass sexuality; characters brag about their promiscuity, gossip about affairs and wear revealing clothing.
Spiritual Content: Some references to religion and themes of faith.
Other Negative Content: Depictions of prejudice, promiscuity and hostility.
Positive Content: Themes of home, patience, faith and love.

I suspect 90% of the interest in In the Heights is going to be coming from people who watched Hamilton for the first time last year and suddenly became massive Lin-Manuel Miranda fans. That’s amusing to me because, before COVID, this film was supposed to drop a year before Hamilton was screened in theaters in 2021. Then Disney shuffled its schedule and gave this film a larger potential market. Sadly that doesn’t seem to have helped the film’s box office gross. The movie opened this past weekend to a shockingly low $20 million, losing out to blockbuster horror flicks like A Quiet Place Part II and The Conjuring: The Devil Made Me Do It.

Speaking for myself, I’ve actually been very fascinated to see the film for entirely unique personal reasons. I have a weird connection to this show in particular because my high school was the first in the country to put on an amateur production of it in 2013. At that time, Lin-Manuel Miranda was still an upstart playwright who was years away from his critically acclaimed masterpiece. In the Heights was his inaugural effort and broke out into mainstream success in 2009. It’s not surprising that his freshman cult-hit did get adapted for the big screen in light of his subsequent mega-success. I’ve been excited to revisit the show for the first time in a decade and reminisce about the story and see how the director of Crazy Rich Asians would approach the material.

While my recollections of the story itself are hazy, I can definitely tell that this adaptation takes a few liberties with the play. Obvious changes include references to “John Wick”, Supreme Court justice Sotomayer, political rallies for DACA, and modern lingo like “thirsty” that I don’t believe was as popular back in the early 2010s. Beyond that though, it’s clear this is a pretty earnest adaptation of the original musical. A handful of actors from the original musical production even show up!

Much like the original, the play follows a working-class Dominican neighborhood in Manhattan called Washington Heights, where dozens of characters are working through the problems in their lives. Most of them are first-generation immigrants or children trying to figure out how to work their way out of poverty and achieve their dreams. Our nominal protagonist is Usnavi, a young man in his late 20s whose immigrant father decided to name his son after the name he saw on the side of an American ship. Now, Usnavi is a frustrated young man saving up money to move back to the Dominican Republic. Until then, he’s stuck as a corner store clerk whose store sits at the center of this bustling town where different people and cultures converge daily for coffee, drama and lottery tickets.

In the Heights is a story mostly told in vignettes. The interconnecting story is somewhat loose and mostly connects by showing how different characters/races/socioeconomic classes grapple with the same problems. Each of the dozens of characters darts in and out of Usnavi’s life and line of sight on a daily basis and form a minor part in the direction of life in Washington Heights.

The theme of how to accomplish one’s dreams is a major question in the story. Each of the characters are either slaving away at small jobs trying to save money, trying to start a business, trying to afford college, or struggling to keep up with the college work they already have. Things briefly become energetic when a lottery ticket worth $96,000 is sold and suddenly the entire neighborhood starts trying to figure out which of them has been given the chance of a lifetime to start their life over from scratch. Sadly though, the ticket is seemingly lost and everyone is forced to return to the drudgery of their normal lives. Following that, the film plots through massive events such as a city-wide blackout, a community funeral and such and explores how the large cast deals with these massive collective problems.

In execution, I’m not sure In the Heights necessarily works on film. On stage, all of these elements have a certain amount of rawness that makes the loose story frame somewhat forgivable. It’s tightly plotted but the characters are sparse and need a certain amount of intimacy to feel impactful. This version is a lovely film to look at visually and all the actors are working HARD in their roles but the film is very slow and long. You REALLY start noticing how little there is going on for the most part in the story and some of the characters feel more plastic and coarse in this version.

That’s not to say it’s a train-wreck. The ambition on display is actually what most impressed me. So much of the effort on display is just focused on bringing the details and setting of Washington Heights to life. There are so many costumes, locations and heavily choreographed dance numbers that it’s clear this wasn’t a rushed or thoughtless production. Alas, the movie is mostly keeping alive on its moments and momentary ability to dazzle and amaze. It’s trying to be spectacular (admirably) but you can’t help but see the magic trick being performed right in front of you.

It helps that those individual moments are lovely! It’s definitely fun seeing most of the Hamilton actors reunite briefly. Anthony Ramos (Phillip Hamilton), Christopher Jackson (George Washington) and Lin-Manuel Miranda himself all get roles in the film and that adds a lot of fun to the margins of the film!

I wish those elements and the overall effort overpowered the film’s weaknesses but none of them warrant a 2 hour and 23-minute runtime. If adaptations like The Producers can cut an hour of runtime out of the Broadway version, this film has no excuse. Hollywood in Toto easily put it best when he said “It’s one ruthless, and necessary, edit away from Best Picture consideration.”

Mine is probably a minority position though. As far as I can tell, musical fans and Lin-Manuel Miranda fans alike seem to be very happy with the final product. As RogerEbert.com’s 4/4 Star review of the film describes it, it’s “Jubilant, unapologetically massive, and bursting with a cozy, melancholic sense of communal belonging”. There’s a lot of hope, joy and energy on display here and it can be quite intoxicating (at least most of the time). I don’t blame a viewer who wants diverse casting and energetic musicals from coming away from the film with a shot of adrenaline. Even so, I was hoping for more.

In the Heights is a detailed, energetic and lovely musical that easily jumps to the top of recent Hollywood musicals (not that this is hard). Still, it's a film that feels underdeveloped and in need of an overhaul to work better on screen as it did on stage.