Review – Honk for Jesus. Save Your Soul. 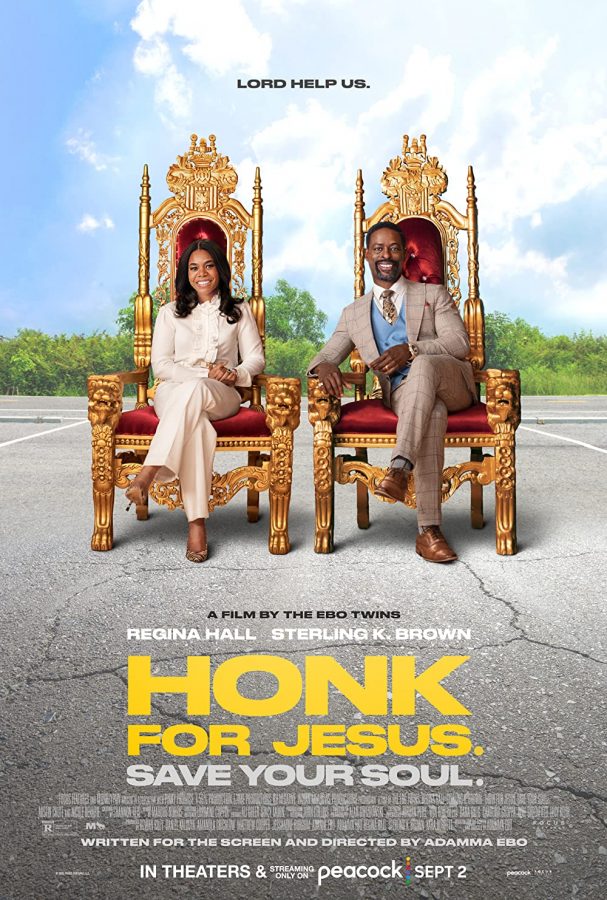 There is no shortage of films out there that satirically jab at religion, from Bill Maher’s Religulous to the more complex satire of Believe Me. Some of it is quite excellent and captures curious tensions that even religious people are happy to grapple and identify with, but sometimes the films are just mean-spirited and lurid in their abject hatred of their subject matter.

Thus enters Honk for Jesus. Save Your Soul; a satire produced by director Jordan Peele’s production company as the inaugural directing effort for director Adamma Ebo.

Violence/Scary Images: Minimal graphic content.
Language/Crude Humor: Severe language throughout the film including f***, s***, and several n-words.
Drug/Alcohol References: Minimal to none.
Sexual Content: Strong sexual themes, limited nudity or depicted sexual activity. Implications of rape and homosexuality.
Spiritual Content: The film is about the pastor of a southern megachurch.
Other Negative Content: Themes of rape, falsehoods, and greed.
Positive Content: Themes of truth, faith, and serving others.

In one of the final scenes of the new Jordan Peele-produced mockumentary Honk for Jesus. Save your Soul, a pastor is awaiting the opening of his extremely popular megachurch that once played home to tens of thousands of weekly visitors. When the first car drives in the parking lot, he stands at the entrance dancing and cheering “They’re here for me! They’re here for Pastor Lee Curtis Childs!”

But it shouldn’t of course be about Lee Curtis Child. The church isn’t about pastors. Catholic Mass and Protestant services are about worshiping Christ and allowing people to participate in the presence of Christ. And the film is aware of this, offering a harsh camera pan to an image of Christ staring directly into the audience as if to say “this was supposed to be about me.”

In the case of Honk for Jesus. Save Your Soul though, I can’t say that is what the film is strictly trying to say. It has a lot on its mind—hypocrisy, lust, greed, consumerism, etc. Much of it is substantive and important in light of the very real failures of contemporary Southern Baptist culture, but there is a lack of heart to the film that makes its criticism ring hollow.

Pastor Childs hosts a Baptist megachurch that’s halfway between a Black Gospel Church and a Joel Olsteen-style megachurch, which once stood as one of the largest congregations in his unnamed area of the American South. When a sexual-ethics scandal erupts, the entire congregation walked out and the church closed until the issue could be sorted out in court.

Childs is very clearly a repressed homosexual, something the film luridly likes to put into focus as it causes very real issues of compatibility with his wife—who is implied to be married to him for the enjoyment of being able to flaunt the money and influence he gives her.

The film really highlights these hypocrisies with lurid details of the lives of megachurch pastors who live lives of sexual sin and opulence while preaching on stage behind golden pedestals about the evils of homosexuality. The characters spend more time worrying about what Pravada clothing they’re going to wear on stage than how to write sermons.

It’s a purposely grotesque display overall, but one that feels like it’s missing the gut punch that comes from genuine human folly and failure.

First-time director Adamma Ebo has spoken of her upbringing attending Black Baptist churches outside of Atlanta but left the religion as an adult. As she told IndieWire, “It’s because we were raised Southern Baptist in Atlanta, Georgia. And we sort of got disillusioned with organized religion early on in our lives. I think we just questioned so much. And then there were incidents that were happening at our church and at other churches where we felt like the people in power weren’t being held accountable for being terrible human beings.”

Many great films about faith have been made by apostates, from Martin Scorsese’s Silence to Paul Schrader’s First Reformed to Ingmar Bergman’s The Seventh Seal. What they all have in common though is a deep sense of tragedy within their understanding of humanity and the ways religion influences people.

That earnestness is definitely missing from Honk for Jesus. Save Your Soul. The movie is directed with an ironic smirk on every character’s face, a very clear acknowledgment that the film wants you to realize how much dishonesty is flowing through their fake smiles. It’s very hard not to look at them like they’re just conceited, selfish people without the self-awareness they need to be meaningful spiritual leaders. Sadly the film offers little more than a lurid sleight and a handful of buried moments of pathos.

Honk for Jesus is certainly an angry and biting work of satire but it chews up its subject matter with little sympathy for the earnestness of believers. The film is under no obligation to do this but without it the movie comes off as aggressively hostile and lacking an understanding of what makes Protestant Christianity appealing and well meaning.