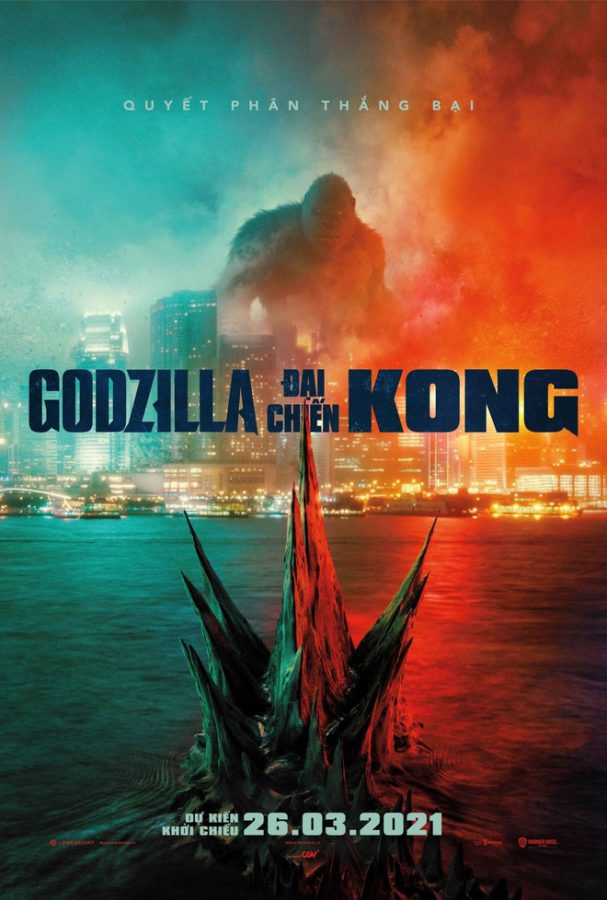 In 1962, two of the largest figures of monster cinema fought in the epic monster film King Kong vs. Godzilla. Both King Kong (1933) and Gojira (1954) were among the most celebrated and beloved films in the genre of their respective countries in the United States and Japan. The film’s incredible international success launched the Showa era of Godzilla films and established the entire formula for the franchise going forward!

Nearly sixty years later, the monsters are back together for the first time since 1962, with Warner Brother’s third attempt to turn the monsters into a mainstream tentpole franchise.

Violence/Scary Images: PG-13 violence and city-wide destruction. Monsters are attacked and killed with green blood depicted. A snake monster is killed and Kong eats its brain, but it’s mostly played for gross-out comedy. Some humans are killed in explosions or eaten by giant bat-like monsters; no gore depicted.
Language/Crude Humor: Some language throughout including s*** and d***.
Drug/Alcohol References: One character carries around a flask of whiskey.
Sexual Content: None.
Spiritual Content: None.
Other Negative Content:  None.
Positive Content: Themes of hubris, cooperation and family.

Godzilla vs. Kong is a film that has fascinated me since its announcement. It’s a direct sequel to Godzilla: King of the Monsters, which bombed at the box office in 2019. It was also being directed by Adam Wingard, a filmmaker who I very much enjoy who has produced two critically acclaimed indie-horror films (You’re Next, The Guest) and two critically reviled blockbusters (2016’s Blair Witch, Death Note).

There’s been a lot riding on the film given that the entire Godzilla franchise has been on hold while Hollywood has been experimenting with big-budget blockbuster renditions of the franchise. If the movie is a financial success, Warner Brothers will make at least one more film in the franchise. If it fails, the rights revert back to Toho and the first round of Japanese films since Godzilla: Final Wars (2004) and Godzilla Resurgence (2016) will likely begin.

Either way, the film will be a turning point for the franchise. While I can’t speak for how the film is going to perform in light of the COVID-19 pandemic and this being the first major film release to drop this year, I can say that the film is a good experience! Much to my surprise, it might actually be the best film of this Godzilla trilogy (or quadrilogy, once Kong: Skull Island is factored in)!

It’s certainly the most confident and outlandish film of the three and that’s saying something. It lacks the brooding tone and pretentious execution of the 2014 film. It’s also a great deal more vibrant, lived-in and focused than the 2019 film. Even with a smaller scale, Godzilla vs. Kong felt like the emotional height of the series!

It certainly helps that the film finally indulges in an underdeveloped aspect of the Godzilla canon that hasn’t been present in the American versions: Godzilla’s villainy!

The first two films played with the notion that the titans were, or ought to be, the rightful rulers of the Earth and that the humans needed to ally themselves with Godzilla if they wanted to survive. That said, Godzilla always felt too morally binary in the first two films. He’s under-motivated to want to help humanity and yet his only goal in both films is to attack monsters that are attacking humanity. The entire gimmick of this portrayal is that humanity is supposedly submitting itself to the whim of this giant animalistic monster yet there’s been no downside in this relationship up until now.

It’s wonderful that Godzilla vs. Kong STARTS with Godzilla attacking humans for the first time in the series, seemingly unprovoked. Then for first time in three films, Godzilla’s status as a near-invincible monster feels menacing and some of the shots in this film really do a good job of capturing the malice and animalistic rage in his eyes as he’s destroying cities.

The story is mostly fairly perfunctory and extremely predictable as these things go. Godzilla is raging and attacking humans for an unknown reason but a conspiracy theorist podcaster thinks he’s figured out a connection between all of the attacks and starts investigating a corporation he thinks might be up to something. At the same time, a team of researchers is protecting Kong on Skull Island after climate change has caused the perpetual storms on the island to close in and destroy his habitat. Seeing a way that they can simultaneously find Kong a new home and find a way to defeat Godzilla, a team of scientists lead an expedition into the hollow Earth’s core!

If you’ve seen a Godzilla film, you know where most of this is going (it doesn’t help that the film’s biggest plot-twist was already leaked months ago but thankfully the execution of it is worth seeing). There’s a good fight at the forty-minute mark and then an extended drag-out brawl for the film’s finale that delivers on the film’s promised duel between the two monsters.

Most of that is expected though. I don’t think anybody is going into Godzilla vs. Kong expecting a densely layered story or huge surprises. To me, the best moments of the film were the quieter ones where we got to learn more about the way the titans and humans interact. I loved all of the Hollow-Earth scenes when the film starts drawing on trippy imagery and mind-bending physics. The film really shines in these moments where it’s clear just how much money Warner Brothers poured into their visual effects! It’s all gorgeous work!

It helps too that the filmmakers got really clever this time around in how they framed the camera. For the first time in the franchise, we get a lot of closeups of Godzilla’s face and eyes and it’s genuinely unsettling.

The film is an odd sequel though at times. It is strange that some of the story elements from the previous film were dropped. The themes of climate change, echo-terrorism and man’s mythological place in the universe subservient to the gods are mostly sidelined for a more straightforward action film. Certainly, that has to do with the change of directors from Michael Dougherty to Adam Wingard.

Both films approach their characters with drastically different tones and this film ends up feeling far more purposely LESS apocalyptic than its predecessor. It is a strange change of tone and storytelling though now that the echo-terrorists and destroyed cities are nowhere to be seen (we don’t see Rodan or the second Mothra egg in the film sadly, and most of the slightly more obscure canonical titans from the old movies like Anguirus, Gigan, Kumonga and Minilla are nowhere to be seen and that kind of bothers me too…).

Most of that’s just personal nitpicking though, although I would suggest the more apocalyptic tone might’ve proven a better third act to a trilogy than a second act…

The film isn’t perfect. Like all recent monster films, it pales in comparison to something as tightly focused, character-driven and personal as Guillermo Del Toro’s Pacific Rim (although Colossal, Attack the Block, 10 Cloverfield Lane and The Host all come pretty close!).

That said, Godzilla is a franchise that’s designed to be imperfect and silly. More so than Godzilla (2014), Godzilla: King of the Monsters, or even Kong: Skull Island, Godzilla vs Kong really flexes its muscles and shows its strengths as a big, silly and dumb action movie that still delivers on fun spectacle. The film doesn’t feel as burdened and weighed down by superfluous nonsense and unwieldy human drama. It’s a playful movie that channels the same spectacle and whimsey as the better Showa and Heisei era films!

Godzilla vs. Kong will likely enthuse other fans of Godzilla and King Kong thanks to its willingness to lean into the sillier elements of the series! I don't imagine people who weren't swayed by the first two films will find it engaging or enjoyable (it is a pretty stupid movie in most regards) but there is a kind of movie fan who will absolutely enjoy the spectacle and visual creativity on display here!