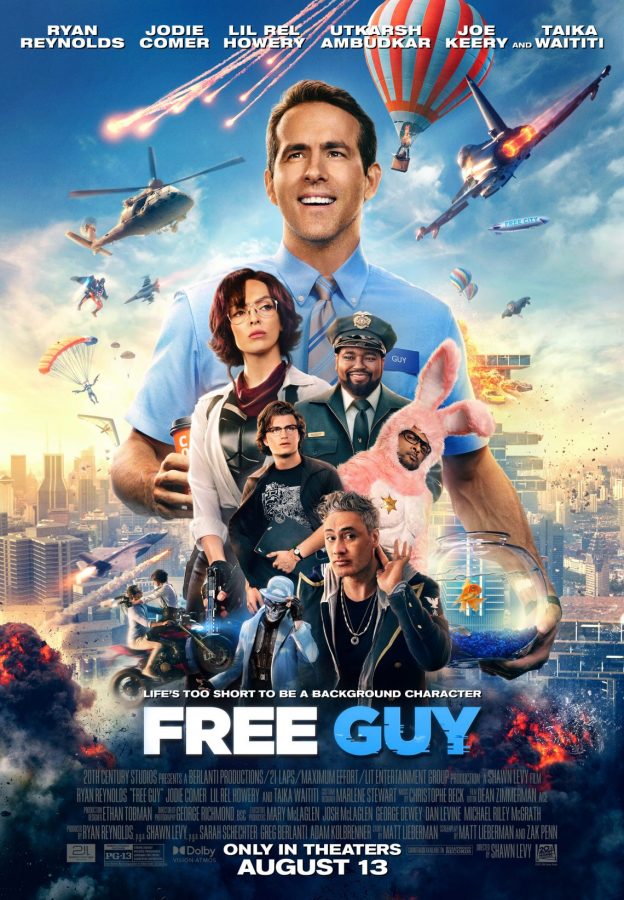 Have you seen the trailer for Free Guy? If you pay attention to films the answer is probably yes. This somewhat overexposed Ryan Reynolds comedy has been running trailers since December of 2019 and was delayed more times than almost any other movie since the beginning of COVID-19. It was originally pitched as a 20th Century Fox comedy prior to the Disney takeover before quietly transitioning into a Disney-Fox production, undergoing changes to the script in the process. Now it’s finally here! The star of Deadpool brings his chaotic, optimistic performance to a very frequently retold story in modern Hollywood while trying to find a fresh take and enough of a story to make it feel enjoyable. Surprisingly, it kinda works!

Free Guy probably shouldn’t work as a movie. It’s a premise that sounds cliche and should feel like the bloated, mismanaged $125 million dollar mess it would’ve become had a miracle not happened. It should feel like a ripoff of every movie that’s ever used its core premise before, and yet I found Free Guy to be a very charming, funny, and sweet action-comedy in spite of everything going against it.

I should back up. Free Guy’s first trailer dropped in December of 2019, just before Star Wars Episode 9 dropped in theaters. It was slated for a summer 2020 theatrical release before being delayed indefinitely due to COVID-19. As a result, movie theaters have been showing the trailer of the movie for almost two years now! In all that time, I suspected the film to be a much shallower version of its premise.

As the trailers show, it’s a comedy about a video game NPC who accidentally starts breaking his code and becomes a viral media sensation known as “Blue Shirt Guy”. This starts causing drama in the real world as the game programmers start dealing with the repercussions of an AI possibly becoming self-aware.

It’s the newest rendition of your classic “coming-to-realize-your-world-isn’t-real” story like The Matrix, They Live, The Truman Show, or Eternal Sunshine of the Spotless Mind but peppered with layers of Deadpool and LEGO Movie-esque self-aware comedy to make it broadly appealing to mass audiences (although thematically I think its most direct comparison is Yahtzee Croshaw’s MOGWORLD even though that book is a little too obscure for worthwhile discussion).

As I said, this idea shouldn’t work. It should feel bloated and dumb. And to be frank, the movie does suffer a bit because of how overtly corporate it is. The dialogue frequently has a “How do you do fellow kids?” quality to it with adult screenwriters trying to write middle-aged characters who talk like millennials. Frequently, this proves embarrassing. This isn’t a brilliant piece of writing. Beyond that though, the film actually does work. Ryan Reynolds, for all of his middling post-Deadpool work, actually does show up to play for this performance and ratchets up his persona in such a way that it feels earnest. Maybe it’s just the fact that the video game world he inhabits is so over the top but “Guy” actually does feel like a resident of this world.

It helps too that the supporting cast do a good job acting around these events and grounding them in some semblance of reality. The two human leads are Joe Keery and Jodie Comer; a pair of video game developers who broke up when they sold their video game pitch to a massive corporation that plundered their source code illegally without given them proper royalties. Jodie’s character is now looking throughout the game for evidence of the theft while her former boyfriend/partner has been brought on board to the company as a bug tester.

It’s clear from the first time we see these characters on screen together that there’s a lot going on between them and their relationship/tension is the backbone of the film. They’re the first characters to figure out what’s happening inside the game and that “Guy” has become sentient. The fact they react fairly naturally to the bizarreness of the events involved in the story actually grounds the narrative with moderate stakes that make the film work.

Again, none of this should work. This should feel like a massive cash grab but a large group of quiet professionals came together, worked hard, and the alchemy of filmmaking gelled together and made this action-comedy perform much better than it probably had any right to. Much of this can probably be placed at the feet of director Shaun Levy and screenwriters Matt Lieberman and Zak Penn. These aren’t the biggest names in the film industry but collectively they’ve been quietly hammering out solid work on movies like Night at the Museum, Cheaper by the Dozen, Christmas Chronicles, and X2: X-Men United. None of these films are masterpieces but they’re all memorable movies that people still look back on somewhat earnestly. Frankly, that’s all a movie like this needs to be. It needs to be funny and workmanlike. It may not be as smart or bitingly satirical as the films that influence it but the movie isn’t aiming for deep commentary on the nature of reality and sentience.

Free Guy is a sweet, fun movie and stands alongside Tenet, The Suicide Squad, and Godzilla vs Kong as one of the few Post-Pandemic blockbusters that has really felt great to see in a theater!

- Some lame dialogue
- Overuse of CGI

Free Guy isn't a masterpiece but it's a solid work of comedy writing and action filmmaking that probably would've been a massive train wreck had it not been in the hands of talented actors and writers who took it seriously!