Review – Everything Everywhere All At Once 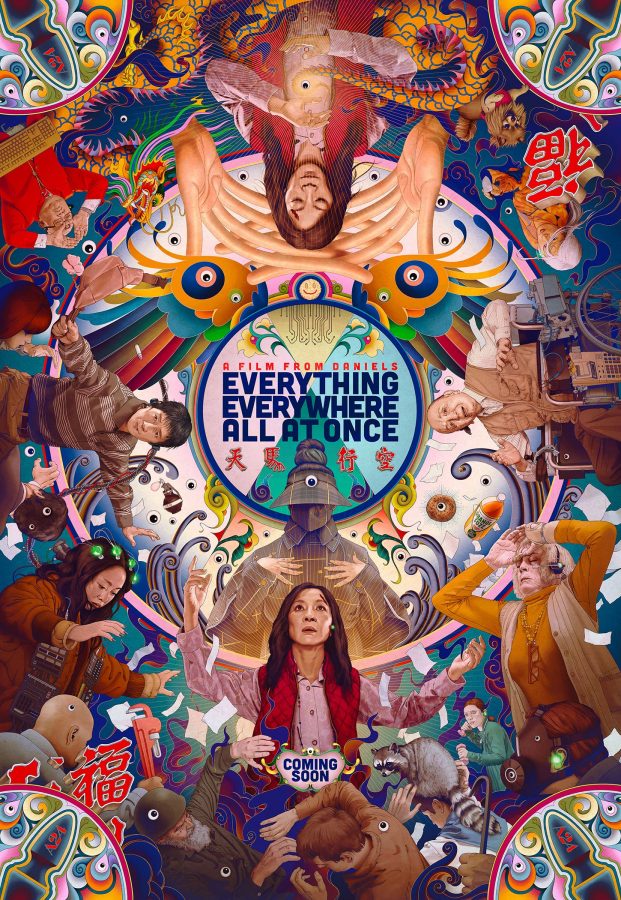 Dan Kwan and Daniel Scheinert, colloquially known as “Daniels”, have earned themselves a unique position in modern filmmaking. They first came to prominence directing the music video for Turn Down For What, before working with A24 on their first film, Swiss Army Man (2016). Scheinert then went off on his own to direct the incredible dark comedy The Death of Dick Long (2019). Now they’re finally back together for their sophomore film together, Everything Everywhere All At Once (2022).

Violence/Scary Images: Limited gore but the film is an action movie with numerous scenes of blood and death. Often injuries are played for laughs.
Language/Crude Humor: Severe language throughout including f*** and s***.
Sexual Content: No sex or nudity is depicted on screen but sexuality is a frequent plot point. The main character’s daughter is in a lesbian relationship, and her coming out as gay to her grandfather is a major part of the narrative. There are also several action scenes where sex toys are used as weapons and a scene of a man going into a back room filled with sex toys.
Drug/Alcohol Use: Characters smoke and vape. There is alcohol consumption.
Spiritual Content: Religion plays no role in the story. The film’s philosophy is that life is ultimately meaningless and the only solution to despair and loneliness is human connection and kindness.
Other Negative Themes: Themes of suicide, despair, and meaninglessness.
Positive Content: Themes of kindness, connection, communication, love, and honesty.

To say that the Daniels have certain cinematic preoccupations would be an understatement. Swiss Army Man begins with a man about to commit suicide, before transitioning into an existentialist comedy about bonding with a farting corpse. Their films are silly, scatological, disgusting, nihilistic, and emotionally charged, brimming with absurd imagery and willing to use every moment of grotesque visual storytelling to drag the viewer along and force them to ponder the meaning of life.

And that’s all to say that Swiss Army Man was a promise, one of the best debut films of the past decade, and a hope that these two directors would reunite and grow as artists together. It appears with their second collaboration they’ve not only done so but knocked it out of the park with one of the most intense tour-de-force films in recent Hollywood history.

It’s easy to love a film like Everything Everywhere All At Once. It’s a film straight out of the Edgar Wright playbook—a genre mashup comedy filled with huge references to everything from Kung Fu movies to Terminator, The Matrix, Ratatouille, etc—but also a film that tries to marry it to Terrance Malick-esc emotional reflection on the nature of life, purpose, and ultimate meaning in the universe.

And since it is a Daniels production, it ultimately transforms into a film about the desire for self-annihilation within the endless meaninglessness of the universe, and the equal urge to force the universe to mean something when the urge to stare into the abyss is hanging over you. The result is a film that is, in some regards, emotionally juvenile, but cinematically impressive.

The film follows a small Chinese-American family struggling to get by in a failing laundromat. Evelyn Wang (Michelle Yeoh) is a mostly frustrated and unhappy middle-aged woman who is struggling with finances, struggling to reconcile her relationship with her estranged father, struggling in her marriage, and struggling to relate to her recently outed lesbian daughter.

During an average visit to the IRS to work out her tax problems, she’s confronted by a mysterious individual who possesses her husband and tells her that she is the key to saving the multiverse. She is given Bluetooth devices that allow her to trade minds with other Evelyns from other universes long enough to experience their lives and steal their abilities – kung fu fighting ability, cooking abilities, etc – that she can use to help survive a brutal supervillain who is hunting her down across the multiverse for some unclear reason.

There is a lot to recommend with Everything Everywhere All The Time. It is immensely funny, brutally emotional, goofy, action-packed, mind-altering, and thrilling. But what really sells it is its introspection. It’s a very small personal story—a story of a family of four struggling to overcome neglect and resentment—that is blown up into cosmic proportions. It’s a film where the utter vastness of the universe itself is a thematic stand-in for the emotional space created between characters who don’t know how to be honest with one another—people who just want to be told that it is okay for them to be the way they are.

It helps that the cast is an all-time great ensemble. Michelle Yeoh has completely broken out into the mainstream in the past decade in a surprising way, which is refreshing if you’ve known her long enough to remember her career-defining role in Crouching Tiger, Hidden Dragon. She’s a star in Star Trek: Discovery, The Mandalorian, The Book of Boba Fett, Crazy Rich Asians, and Shang-Chi, and she is set for roles in The Witcher Blood Origin and Avatar 2. And she gives one of her best performances to date for Everything Everywhere All the Time, playing a very vulnerable and sad role of a woman who is forced to reflect on a lifetime of mediocre choices and decisions and struggles to reconcile them.

The great James Hong and Jamie Lee Curtis are both on deck for major roles, turning in excellent funny performances for vital characters. The quiet MVP might very well be the surprising performance of Ke Huy Quan who is (I KID YOU NOT) best known for his performance as Short Round in Indiana Jones: Temple of Doom. The performance calls for him to play multiple roles simultaneously including a bumbling beta-male husband and a universe hopping conspiracy theorist scientist, and he has the range to make the role fully his, playing a vital part in the plot.

Certainly, much of the film is melodramatic. There is always a danger with wacky, emotionally heightened films such as this that the wackiness serves no purpose, that it’s all just channeling juvenile emotional stakes. And there is certainly some truth in that. The Daniels’ life philosophy seems to be that the universe and the structures of society are messy and meaningless; that there is no greater purpose to life and the only thing that holds together life itself are the small moments of kindness and connection between people, and it’s the only thing that makes life worth living.

Their viewpoint is a very atheistic vision of the universe and one the film posits, lending itself to despair and self-loathing. As the rapidly aging ethos of Rick and Morty has shown us, this sort of pop-nihilism has a short shelf life. Is “Wub A Lubba Dub Dub” still funny or fresh just eight years later? If Daniels really wanted to create a 2001 or Tree of Life for this particular moment of millennial existential angst, it is unclear how well it will age as our generation grows out of its youthful malaise and actually starts seeking meaningful adult ways to grasp the world.

The comparisons to 2001 or Tree of Life shouldn’t go unheeded though. Everything Everywhere All At Once is a miracle of a film; a personal story set against the cosmos that captures a humanist beauty in the desire for life to mean something and in the necessity to reject ultimate despair and suicide. This is the kind of fully realized cinematic masterpiece most directors only pull off once. It just so happens that it is also a movie with kung fu, heads exploding into confetti, evil IRS agents possessed by agents from another universe, a love story between two people with hotdogs instead of fingers, and a raccoon that controls a man’s hair that allows him to achieve his dream of becoming a hibachi chef.

Everything Everywhere All At Once is a masterpiece of comedy and spectacle and a beautiful movie about the meaning of life. Its musings may be somewhat adolescent, but as a realization of those ideas it is a masterpiece of visual storytelling and character writing!