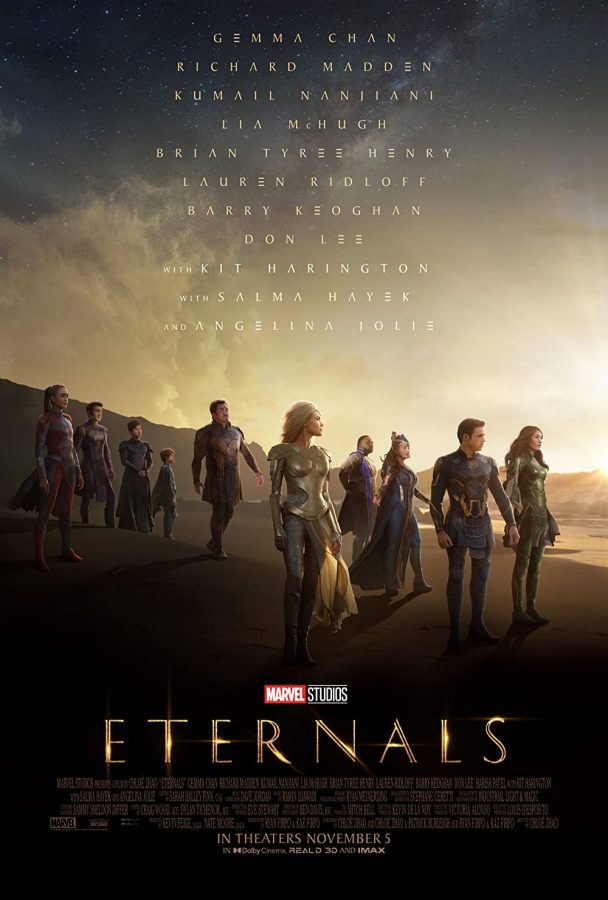 Disney’s Marvel Phase 4 continues to hold the line, alluding to huge stories and ideas it eventually wants to play with during Phase 5 but keeps kicking down the road due to a combination of COVID-19 delays, lawsuits with actors, and James Gunn related snafus that put the entire cosmic side of the films on hold until after Guardians of the Galaxy Vol. 3 drops in 2023.

For now, Disney is content to let the franchise breathe, do weird things, and tie up loose ends from the previous movies while letting new and creative directors take their shot at introducing new characters now that Steve Rogers and Iron Man can’t be depended upon for consistent box office attention. If none of that interests you, you can keep up with the adventures of Captain America, Scarlet Witch, Loki, and Hawkeye on Disney+ for the low price of $7/month!

In the meantime, that leaves us with a film as weird as Eternals dropping into theaters this fall…

Violence/Scary Images: A few scenes of PG-13 violence; characters are stabbed leaving open wounds, alien monsters are sliced and bleed grey blood, dead bodies are depicted, characters engage in warfare.
Language/Crude Humor: Some infrequent language throughout the film.
Sexual Content: Two characters have sex on a beach; no graphic nudity or content is depicted. Two married men kiss.
Drug/Alcohol Use: Characters casually drink alcohol.
Spiritual Content: Mildly anti-theistic themes that question the nature of the gods and creation; nothing explicitly or overtly subversive. Celestial beings are depicted as creation deities with the power to create life.
Other Negative Themes: Some content certain Christians may find objectionable in regards to sexual or religious content.
Positive Content: Themes of love, family, and heroism.

Eternals is a weird movie. That much should be obvious from the trailers. It’s a big-budget Marvel Cinematic Universe film with a huge cast of A-list actors, a $200 million budget, an extremely high concept science fiction pitch based on obscure Jack Kirby comics from the 1970s, and an Oscar-winning arthouse director at the helm of her first big-budget action movie. It’s a film filled with ambition and big ideas. It’s also the first Marvel Cinematic Universe film that’s likely to both critically and financially bomb at the box office. Due to a combination of MCU fatigue, social media culture wars, and COVID-19 related box office malaise, Eternals is not receiving a welcoming embrace from the film community. It even has a pretty shockingly low critic rating on Rotten Tomatoes with only 49% approval from professional critics, at the time of writing.

Most of the drama surrounding the film’s release is mostly off of my own personal radar though. I went into Eternals mostly curious about it in context with the filmography of its director, Chloé Zhao. She’s most well known as the director of the 2021 Best Picture-winning film Nomadland but her filmography as a whole is mostly comprised of small arthouse neo-westerns like The Rider. She’s a director with a very specific style and pace. She makes slow-paced dramas about miserable, lost characters living their lives in the American prairie states, and struggling to find their way in an unforgiving modern world where poverty, failure, and isolation have destroyed the American dream.

That’s why Eternals is so weird. It’s a huge and largely unexpected, and possibly undesirable, career pivot for a director who doesn’t seem altogether right for this material, yet enthusiastically embraced it and tried to bring it into reality. Evidently, Zhao pitched this film to Marvel merely out of her interest in the material and the Disney machine was wide open to her idea (likely because they wanted another Guardians of the Galaxy style cosmic film in their staple but with the added benefit of a young award-winning female director at the helm).

The result is mixed. Eternals isn’t a bad movie (especially not in a world where X-Men Origins and the theatrical cut of Suicide Squad exist) but it’s also a movie lost in its ambitions. It’s trying very hard to be an epic meditation on the nature of life, death, love, creation, destruction, warfare, colonialism, order, chaos, God, the meaning of life, and the cycles of history but it mostly gets executed in such a way where ten grumpy people argue in hallways about the moral implications of whether or not they’re in the moral right to interfere with human history.

It’s also a Marvel movie so it’s got expensive-looking action scenes, CGI monsters, and post-credits scenes with deep-cut lore character cameos. It’s trying to be slow and contemplative at the same time as it wants to be contemporary and thrilling. The mix is messy. Zhao’s voice as a director feels lost in the machine. The degree to which you like Eternals will ultimately come down to what you want out of it and what you’re willing to put up with.

As the trailers have shown, the movie is a cosmic superhero film about a team of space aliens known as “The Eternals” who arrive at Earth seven thousand years in the past. They’re immortal and tasked by a race of space gods known as the Celestials to hunt down a race of predatory monsters known as “the Deviants” who pose a threat to human beings. Once the monsters were defeated, the team broke up and spread around the world after a series of philosophical disagreements arose. Some of the team wanted to interfere in human history, help them improve their technology, and help break up human warfare. Others tried to stick to the plan. In the present day, the immediate effects of Avengers: Endgame have seemingly brought back a handful of extremely powerful deviants with the power to absorb the Eternal’s superpowers. Now the remaining Eternals must gather together, contact their celestial leader and figure out why the Earth is experiencing a strange series of unnatural earthquakes on top of dealing with the deviants.

I don’t want to spoil what ultimately gets revealed in the film because the plot actually does end up going to pretty crazy places, with intense lore implications going forward for future cosmic films. All I’ll say is the initial plot ends up being something of a red-herring for what’s actually going on in the story. Much of the film’s two-and-a-half-hour runtime is just dedicated to the Eternals trying to get the band back together slowly while the actual implications of the story’s events start unfurling. Given what the film ultimately reveals, I understand why the plot takes the turns it does. The problem is that it ends up leaving the film feeling very limp and plotless. The characters are all developed fairly well but the character arcs the film tries to build are underdeveloped. The final emotional catharsis in the film’s finale doesn’t feel well earned, which is a sign the script is sloppy.

For some, the film is going to have enough good scenes and interesting details to keep them entertained. It’s clear the film is extremely ambitious. The movie is picking up the “Chariot of the Gods” idea, that ancient demigods and mythic heroes were aliens, and running with it. The film really does go all-in on its Ancient Aliens setup and plays around with a lot of goofy ideas. We get to see fully realized visions of ancient Babylon and Mesopotamia. Most of the characters are named after mythical characters like Circe, Athena, Gilgamesh, and Icarus and the implication is that most of the great epic stories were based on the Eternals’ lives. There are a lot of fun details!

Again, I think what does and doesn’t work in The Eternals is a case of mismatched ideas and mismatched creative instincts. Chloé Zhao is an extremely talented filmmaker but her strength comes from her melancholy and her ability to craft interesting characters in mostly plotless slow-burn dramas. Marvel superhero films need a more overt and controlled structure to earn their emotional highs. It can’t attain its own highs, and when it fails it just retreats back into the muddy factory-produced tone of low-tier MCU films like Thor: The Dark World and Ant-Man and The Wasp. It’s not bad but it can’t live up to its own high ambitions.

Eternals is going to be a very polarizing movie, but a lot of that frustration is going to depend on what baggage you carry into the film. On its own, it's a passable, if more ambitious than usual, mid-tier Marvel movie. It's a shame it didn't fully stick the landing but your reaction will depend on what you ask from it.