Review – Earwig and the Witch 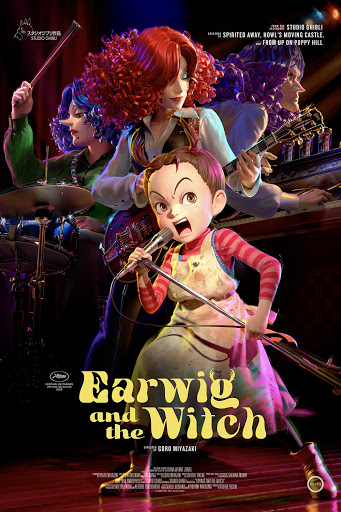 When I was studying animation in college, we regularly referred to Hayao Miyazaki in particular and Studio Ghibli in general as “Japanese Disney”.  This is not an unpopular opinion, and most recently, some the negative elements of that parallel are coming to light.  Disney had more than its fair share of creative flops, at least since The Black Cauldron (1985).  Now, with the unsound introduction of a CGI animated title meant as a direct-to-tv effort after the studio resurrected from unofficial closure following the 2016 co-production of The Red Turtle, it seems as though the house that gave us such masterpieces as My Neighbor Totoro and Spirited Away has entered its dark age.  I’ll try to hope for the best…

Violence/Scary Images: The movie begins with a car chase involving magic (a witch riding a motorcycle throws her hair, which magically turns into worms, at a car). Other scary elements include the frightening, shape-shifting Mandrake, whose demon eyes grow huge and wild and who yells and threatens Bella. The witch sets worms on Thomas and Earwig if they don’t obey or don’t complete all the work she commands. Earwig is trapped in the house and can’t get out except when the witch allows her in the garden. Earwig is shown slicing snake skin and working with creepy ingredients like “rat’s bones,” “bat wings,” “donkey ears,” etc. Earwig puts a spell on Bella that gives her extra limbs. Orphanage director mentions how one orphan’s parents “were killed in a fire.”

Other Negative Themes: Acts of deception, underhandedness, manipulation.  Orphaned and abused children are a central motif.

Positive Content: The story’s messages include the importance of being courageous and curious, not giving into fear, rising to challenges, and remembering to find the good in any situation. Also encourages friendship and teamwork.

Although Earwig at first appears spoiled, self-centered, and manipulative—claiming she can get everyone to do everything she wants—she’s also curious, brave, strong, and determined. She cares deeply for her best friend, Custard, and the black cat, Thomas, and even grows to feel affection for the adults around her. The Mandrake and Bella are frightening for most of the movie, but they eventually take care of Earwig.

One could probably put together a whole documentary on the odd drama of connection, transition, parental separation anxiety, and creative and artistic disparity that exists between Japanese animation director Gorō Miyazaki and his father, the legendary pioneer Hayao Miyazaki.  It is certainly a strained relationship that is somewhat fraught with what could be seen as gross misunderstandings and a lack of connection.  That a number of Gorō’s films that he directed under his father’s studio are plagued by the same shortcomings (From Up On Poppy Hill being arguably the greatest exception to that rule) is most likely not coincidental.

Sadly, the direct-to-tv feature Earwig and the Witch, a CGI animated adaption of the Diana Wynne Jones novel of the same name, is another example of how much room Gorō has to improve.  This is the second time that a novel by Diana Wynne Jones has been adapted by Studio Ghibli, the first being Howl’s Moving Castle (2013), though Hayao’s effort was only a loose retread of the 1986 novel, whereas Gorō’s film, I’m told, is more faithful to the source material.  Whether that’s true or not really has no bearing on the fact that what’s on offer here is a barely watchable slog of thin writing, aimless progression, and wooden animation that serves as an unwelcome blight to the heart and soul of what has made Studio Ghibli so great for so long.

In what seems like it could have been a throwaway side plot in Kiki’s Delivery Service, Earwig and the Witch introduces us to a young girl (Taylor Paige Henderson in the English version) left by her redheaded mother at the footsteps of St. Morwald’s Home for Children.  She grows into a rather manipulative rascal who manages to get everyone else at the orphanage waiting on her hand and foot.  Because of this, young Earwig (or Erica as the head matron calls her) is quite content to never leave the orphanage, crossing her eyes to ward off anyone who may consider adopting her.  This plan fails when she is eventually taken in by the physically intimidating giantess Bella Yaga (Vanessa Marshall) and her reclusive and enigmatic partner Mandrake (Richard E. Grant).

What follows from this unwanted adoption seems like what could be the set up for every orphan fairytale we can think of, but something critical is missing.  When working on the stellar 2015 live-action remake of Cinderella, director Kenneth Branagh stated that he wanted to make a movie in which “kindness is a superpower”.  As an overworked housemaid to an emotionally abusive legal guardian, one would hope that Earwig would be another welcome addition to the roster of moral models of the “noble oppressed”.  Unfortunately, that’s not the case here.

Far from being a kindhearted and empathetic waif or even having an aim in seeking a fitting substitute for her absent mother, Earwig’s primary focus is a near sociopathic desire for control over others and her environment.  Even while she was at the orphanage, she had nearly everyone wrapped around her finger.  Upon exiting, she didn’t even bother to say goodbye to her supposed best friend Custard (Logan Hannan).  This makes it all the more flat when she begins to deliberately misname the housecat Thomas (Dan Stevens) by Custard’s moniker as though he was anything more than a tool to her.

In fact, the greatest weakness to Earwig and the Witch is that nearly all the characters are thoroughly unlikeable.  Those that aren’t pathological and contemptuous are just cold, emotionally distant, or irrelevant.  Thomas provides some laughs, but comic-relief side characters by definition cannot carry a film’s emotional heart.  The shady and scowling character of Mandrake has his moments of visual panache, but ultimately fails to be anything more than an inconsequential side gag.

With such a flavorless setup and cast of characters, you’d think the film would at least try to make an enjoyable plot out the characters’ exploits.  If that is what you believe, dear reader, prepare to be greatly disappointed.  Even words like “aimless” and “meandering” give undue compliment to Earwig and the Witch, since those pejoratives at least suggest a variety of locales and scenery, even if they have no cogent unity with one another.  Here, the spaces and environments are so tightly narrow and provincial, that I was feeling suffocated even by the end of the film’s relatively short runtime.

If that isn’t enough, the morbidly lackluster CGI animation production is nearly as unlikeable as the characters it depicts.  Aside from some interesting design flourishes, such as Earwig’s pointed updo that reminded me of a beetle’s mandibles and the distinctly 70s-style moss of hair that adorns Bella Yaga’s dome, the entire feature is plagued by an aesthetic that feels artificial, plastic, dated, and grindingly generic.  Gorō and his team have made their lack of experience and expertise with CGI production explicitly clear here, and it’s more wounding to know that such a dud of animation came from the house that Hayao Miyazaki built.  In stark contrast to the natural and believable gestures, expressions, and body movements of The Secret World of Arrietty, for example, Earwig is plagued by the kind of awkward wooden performances that I haven’t seen from a professional animation studio working with CGI probably since the early 90s.

By the end, I was really wondering if this entire effort was done more out of obligation than inspiration.  There are suggestions of a larger narrative in the margins, with hints of Earwig’s lineage dancing in and out of focus occasionally.  It’s at times baffling how it is that Earwig herself could be more invested in mastering Bella Yaga’s elementary witchery to harass and prank her new guardian rather than figuring out how to use her new-found resources to reconnect with her long lost mother, or uncover the mystery behind Mandrake, or just about anything else that would be of far greater import to a normal functioning character.

By the end, nothing of genuine value is gained.  None of the characters really learn much of anything, make any significant changes or accomplish anything noble, profound, or even thought-provoking.  Throughout the entirety of the second act, there were no real goals or ambitions to follow.  Earwig wants to make Bella suffer, and Bella wants to exploit Earwig’s labor in peace.  As if to add insult to injury, the film cuts at the direct moment when what could actually make for an intriguing plot finally develops.  The abrupt end to From Up On Poppy Hill was perfectly suited to the emotional payoff that Gorō delivered back then in 2011.  Nothing even close to such caliber is anywhere to found here.

I almost feel cheated. This seems like a college project done on a budget by people inspired by Ghibli, not by the people behind the flagship studio itself. That may be a more fitting description than I’m willing to admit, all things considered.