Review – Doctor Strange in the Multiverse of Madness 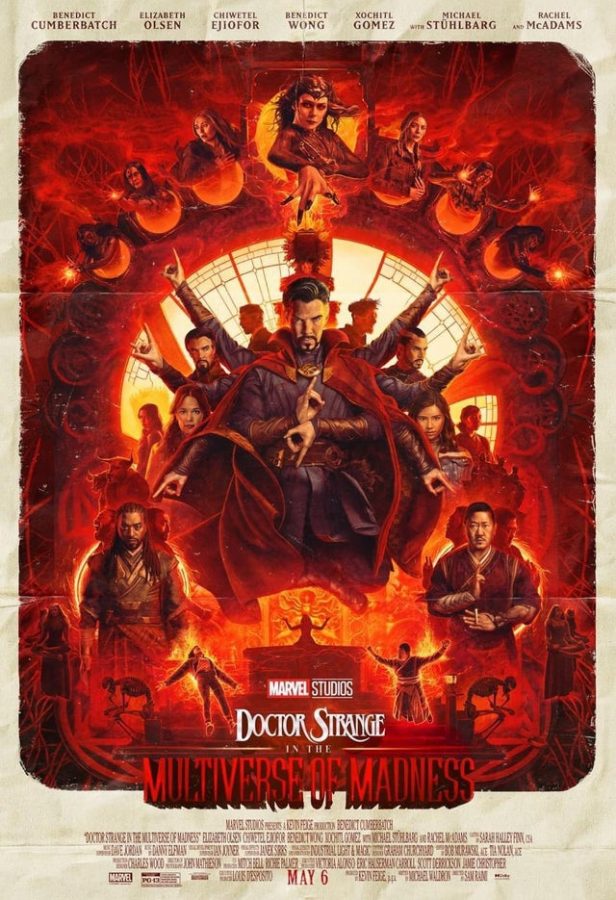 It’s become all too easy to dismiss Marvel movies in the past few years; Avengers: Endgame served as a good stepping off point for many exhausted fans, anti-consumerist malaise has started to compound in some corners of the internet, the Martin Scorsese controversy made “Marvel Movies” into a dismissive slur for a certain kind of shallow blockbuster that was undeserving of attention, and the overall quality of Phase 4 films has been iffy.

Black Widow and The Eternals were met with a shrug, the Disney+ shows have all been met with decent but unremarkable reviews, and the overall metanarrative of the franchise ground to a halt—likely caused by Disney’s major Phase 4 and Phase 5 plans being tied to Guardians of the Galaxy Volume 3 which was delayed from 2020 to 2023 due to the James Gunn Twitter controversy in 2018. Marvel literally had to jog in place for two years, which was extended to three years because of the pandemic pushing all MCU films out of 2020.

The franchise as a whole has been overdue for a handful of really solid stories that focus on character drama and make the most of what the MCU has to offer, and I’m thankful to report that the second Doctor Strange movie might very well be that film!

Violence/Scary Images: The movie has PG-13 violence but some of it pushes into the more gruesome and grotesque side of things, with depictions of partially rotten corpses, demonic entities, magic that evaporates a person’s body into glowing dust, and other such action violence. Blood is depicted in detail.
Language/Crude Humor: PG-13 levels of language—nothing too severe.
Sexual Content: A character has two lesbian mothers in one scene.
Drug/Alcohol Use: Characters casually drink alcohol.
Spiritual Content: The movie explores and depicts mysticism, dark magic, demons, and monsters as very real and very dangerous. A character is briefly attacked by dark spirits who attempt to drag him to “Hell”.
Other Negative Themes: Characters embrace dark magic as a means of controlling others and influencing them.
Positive Content: Themes of motherhood, trust, and self-sacrifice.

I don’t want to oversell Doctor Strange in the Multiverse of Madness. It isn’t a deeply complex or emotionally revealing work of genre cinema on par with The Dark Knight or Mad Max: Fury Road; the kind of generation-defining blockbuster that completely changes everything. It is just a very good version of exactly the kind of story the Marvel Cinematic Universe specializes in telling—quirky, fun, and visually creative genre stories about characters undergoing a personal journey of discovery to become a better person. This kind of story is the epitome of why Iron Man, Guardians of the Galaxy, and Black Panther are held up to such high pedestals and I think this film achieves that too!

I probably should’ve expected as much. I’ve been extremely excited to see this film ever since the great Sam Raimi was announced to direct this film back in spring 2020. Raimi is one of our greatest living genre directors; a master of pop-filmmaking responsible for a half dozen of the greatest works of cinema to come out of the past forty years, among them being the Evil Dead trilogy, Dark Man, Xena: Warrior Princess, the Spider-Man trilogy, and more. He even collaborated on several films with his friends, the Coen Brothers, including Crimewave and Hudsucker Proxy. Raimi has largely been out of the director’s chair since his last film in 2013, Oz the Great and Powerful, although he did deliver three seasons of Ash vs. The Evil Dead in the meantime.

Raimi is the best director the MCU has ever brought into a project to date, and a natural fit given his career-defining work on films like Spider-Man 2. Many are going into this film rather hesitant, afraid that Raimi’s incredible flare and talents will be watered down by the Disney formula machine, and that his work would be compromised. I’m happy to say that’s not the case.

Doctor Strange in the Multiverse of Madness is both a fully realized Sam Raimi film AND a fully realized MCU film, packed with wonderful character beats, creative cinematography, clever action scenes, a Bruce Campbell cameo, and half a dozen of the most gratuitous MCU cameos we’ve seen in the better part of a decade. Maybe that shouldn’t be surprising though. Raimi is one of the best journeymen directors in the business and executive producer Kevin Fiege certainly has experience working with him in the past. Their instincts must meld together really well.

The film follows the events of Strange’s last five appearances in the MCU. He’s going about his life when one day a mysterious girl, named America Chavez, appears to him out of the blue and explains that she’s from another universe and that demonic beings are chasing her down to capture and deliver her to a mysterious being in the multiverse who wants to steal from her a mysterious power. Unsure how to proceed, Dr. Strange seeks out help from former Avenger turned runaway criminal Wanda Maximoff to figure out a way to protect her and ends up being sucked into a quest across the multiverse to seek out an artifact that will allow him to gain the power he needs to defeat those in Chavez’s pursuit.

What makes the film work beautifully is how well it understands Stephen Strange as a character. The movie is very sensitive to the way in which this character was portrayed in his last five appearances and it builds up from it. Dr. Strange is a bizarre character, at least partially, because up until now he was infinitely more interesting in his cameo roles than in his solo film. The first Doctor Strange film was deeply flawed, visually flat, lacking certain creativity in its magical ideas, and didn’t fully deliver a story on its central character’s core motivations and tensions. When he appeared in Thor: Ragnarok, Avengers: Infinity War, and Spider-Man: No Way Home, he was a fully realized sorcerer with confidence, displayed his abilities creatively, and oozed charisma. He was more fun in these movies than in his own film.

Doctor Strange in the Multiverse of Madness combines the creative and charismatic side of Stephen Strange with the character aspects set up in the first film. We’re once again introduced to the egotistical superhero but he’s now a changed man who has grown in the years since the original movie. He’s grown into a man that can make sacrifices and put the greater good above himself, but he is still unhappy and uses his incredible powers to control every situation he comes across. The events of the series have compounded though and the people he loves in his life have moved on. He’s still damaged and he hasn’t learned the central lesson of his life that he didn’t learn in the first movie—to trust other people. By setting him on a warpath across the multiverse, this film sets up a great story of self-discovery wherein his quest for power to solve his problems gives way to the ultimate reality of his life; that he must become a better man to save the day.

Raimi’s visual style also helps to heighten this film tremendously. The first film borrowed heavily from the works of Christopher Nolan—namely Interstellar and Inception—and The Matrix, to anchor an otherwise bizarre story of magic and wizards into a grounded universe. Its bleak visuals though really robbed the film of vibrancy. Raimi reaches back into the corniness of Silver Age Marvel Comics for inspiration and pulls together some amazingly creative scenes. Dr. Strange’s magic has never been this well-realized, with the most esoteric implications of his abilities being taken full advantage of—summoning monsters and disembodied limbs from alternate dimensions to fight on his behalf, and materializing abstract concepts to use as weapons.

Speaking for myself, this is the fully realized package of everything I wanted out of this film! It is an incredibly cohesive, clean, and straightforward movie that embraces the humanity of its characters and lets the clarity of their motivations drive the story. It’s not as reliant on humor as the Gunn and Whedon films, and doesn’t need to be. It fits together solely on the strength of a very simple and engaging story, filled with dozens of little Raimi moments where the dark inner lives of these characters are blown up with soap-opera melodrama that shows us who they really are and why they’re doing what they’re doing.

I can’t speak to how others will respond to it. There is a lot of nervous antipathy and hype going into this film and I’m not a good gauge of predicting public opinion. In an age when the term “Film Critic” is a synonym for snobbishness and partisan hackery, I can’t speak for how the proper Marvel Fans will appreciate this film. My favorite MCU to date is Guardians of the Galaxy Vol. 2 and I gave Avengers: Endgame a 7.3/10 review. I also liked Iron Man 3, arguably the most controversial MCU film. Take from that what you will. I generally like MCU films when they’re more director-driven projects, and given the strength of this film, I wouldn’t be surprised if Disney is BEGGING Raimi at this very moment to sign on to direct Doctor Strange 3, Fantastic Four, or a fourth Tobey McGuire Spider-Man film.

All I can say for now though is that Doctor Strange in the Multiverse of Madness was exactly the kind of Marvel movie I look forward to! It was the best MCU film in half a decade and fully realized everything I enjoy about these movies. It is also a welcome return to one of our greatest living pop-directors who I hope delivers a half dozen movies with this much creativity and energy!

Doctor Strange in the Multiverse of Madness is the best Marvel Cinematic Universe film in half a decade and finally delivers on ideas and themes merely alluded to in the original film six years ago. Director Sam Raimi rises to the occasion and delivers a fun and creative work of blockbuster storytelling!