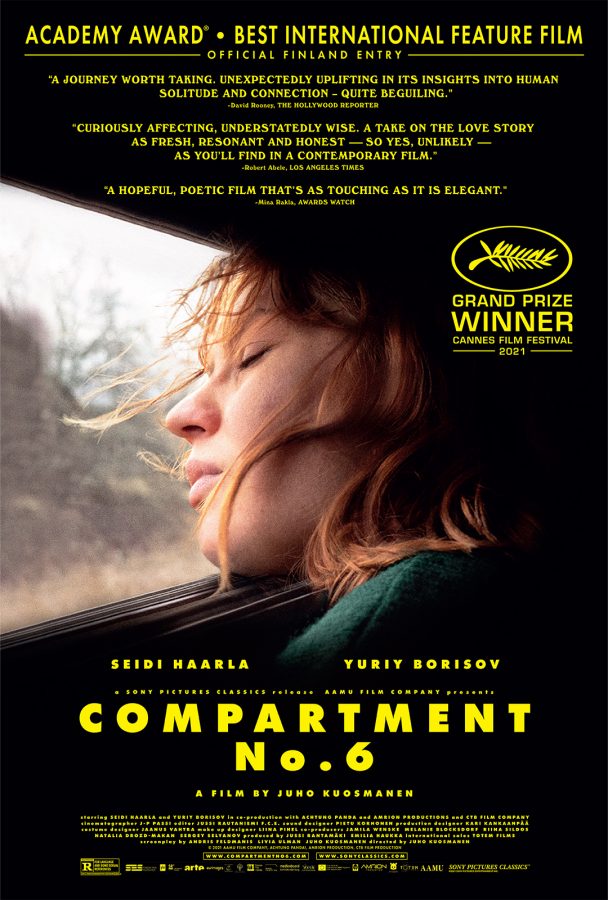 The Finnish contribution to the upcoming Academy Awards this weekend is a small-scale romantic drama set against a train trip between two Russian cities. The film comes to us from director Juho Kuosmanen, a Finnish director whose previous film The Happiest Day in the Life of Olli Mäki was selected for the 2016 Cannes Festival. Compartment No. 6 won the Grand Prix at the 2021 Cannes Film Festival.

Violence/Scary Images: None.
Language/Crude Humor: Some crude language. Discussions about sexuality and sexual activity.
Sexual Content: Brief depiction of partial nudity. Two women are depicted in a bi-sexual romance. Characters describe prostitution and sexual acts.
Drug/Alcohol Use: Characters drink a lot of alcohol.
Spiritual Content: None.
Other Negative Themes: Crude depiction of sexuality.
Positive Content: A sweet story about a man and a woman falling in love over the course of a train trip.

Compartment No. 6 is a surprisingly cozy and heartwarming film. It is a romantic drama ironically set against a claustrophobic experience—a train trip between two Russian cities set against a cold and brutal landscape of snow-capped hills, frozen railway tracks, and icy waters.

Despite its topical and politically relevant backdrop, politics and current events don’t have an impact on the story of Compartment No. 6. There are contextual clues that would suggest the film is set in Russia during the late 1990s, such as a walkman, a camcorder, and a reference to Titanic. The film never references any other cultural landmarks that would suggest it is interested in its time period.

Its setting falls entirely into the background, which makes the choices curious. Post-Soviet life in Eastern Europe in the 1990s was a tumultuous time, filled with corruption, poverty, and civil wars. The film never acknowledges these events, only vaguely alluding to the relative squalor of the average Russian citizen. The Russian landscape is whitewashed behind the bright lights of windows aboard moving trains. The skylines of cities are rarely in focus.

The film instead focuses on the romance of our two characters—Laura and Ljoha—which takes place entirely over the course of this singular train trip between Moscow and Murmansk, with two protagonists accidentally falling in love due to their proximity.

Intimacy is an important motif in the film both romantically and practically speaking. Compartment No. 6 is a story filmed around confined spaces. The entire film is shot with handheld cameras in locations that discourage looking at the background. Everything has to be intimate because of the limited space the filmmakers and characters are presented. Their tension, chemistry, and burgeoning romance is entirely founded on the fact they are trapped together in the same train compartment.

The setup for why these two characters are on the train is very simple—even somewhat vague and unimportant. Ms. Laura is a Finnish archeology student living in Moscow with her bisexual roommate, Irena, living a very bourgeoise and romantic life, but feeling cramped and unhappy. Ms. Laura and Ms. Irena were supposed to travel together to Murmansk by train to study the Kanozero Petroglyphs together—a set of ancient rock carvings discovered on the Russian coast in 1997. Ms. Irena is forced to drop out of the trip and unintentionally embarrasses Laura at her going away party.

Mr. Ljoha, on the other hand, is simply traveling to Murmansk for work. He has a new job working as a miner on the Arctic Coast. Ms. Laura is initially upset by his crude demeanor, as he sits in their compartment drinking vodka, smoking, eating tangerines, and making sexually suggestive jokes to her. Their proximity forces them to interact and before long she starts to recognize there is kindness and sadness behind his crude facade. They bond, drink together, visit friends while disembarking the train, and begin to understand their intentions and relationship more deeply.

The train trip amounts to a journey of self-discovery and star-crossed infatuation—two ships passing in the night who learn deeply from each other only to never cross paths again. Compartment No. 6 isn’t a perfect film, it only brushes up against genuine insight and greatness. It feels elusive and lost, but so do its characters. The film captures the warmth and awkwardness of young love in a complex world of fleeting moments, loneliness, and poor timing. It is a three-star indie-drama that more than earns its submission for Best International Feature Film at the 94th Academy Awards.

Compartment No. 6 is a confident and leisurely love story that takes advantage of its setting and characters to find a sweetness and emotion between its two melancholic lead characters.